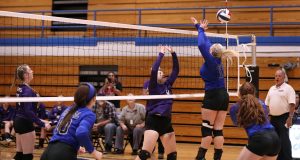 Bluegrass Sports Nation, along with Wolfe County Farm Bureau & Agent Susan Cable are proud to bring you all the great action from Wolfe County High School. For Photos of the first 2 days of action, CLICK HERE.

Night #2 of the Girls 14th regional volley ball tournament continued tonight in Campton, KY at the Wolfe County High School athletic gym.  Tonight’s matchup featured two games taking place.  Game #1 featured the four- time defending 14th Regional Champs Letcher County Central Lady Cougars taking on the Jackson Independent Lady Tigers.  Game Number two featured the Leslie County Lady Eagles taking on the Lee County Bobcats. Letcher entered tonight’s matchup with a 20 win and nine loss season and winners of the 53rd district champion.  Jackson City entered the matchup being the runner up of the 55th district tournament having a 17 win and 16 loss season.  Leslie County is the runner up of the 54th district tournament having a record of 20 wins and 12 losses.  Lee County is the champion of the 56th district tournament and had an 18 wins and 11 loss record.

Bluegrass Sports Nation continued a tradition started during the 14th Regional Basketball Tournament.  Bluegrass Sports Nation interviewed each coach before the matchup’s asking about how their season has gone, who were some of the key players, and what would be a key to a win in the matchup.  After the matchups were offer we interviewed the coach again and a couple of the Seniors.  The kids were all nervous but seemed to enjoy the exposure and interviews.  Check the videos out on our facebook site, and like the page.