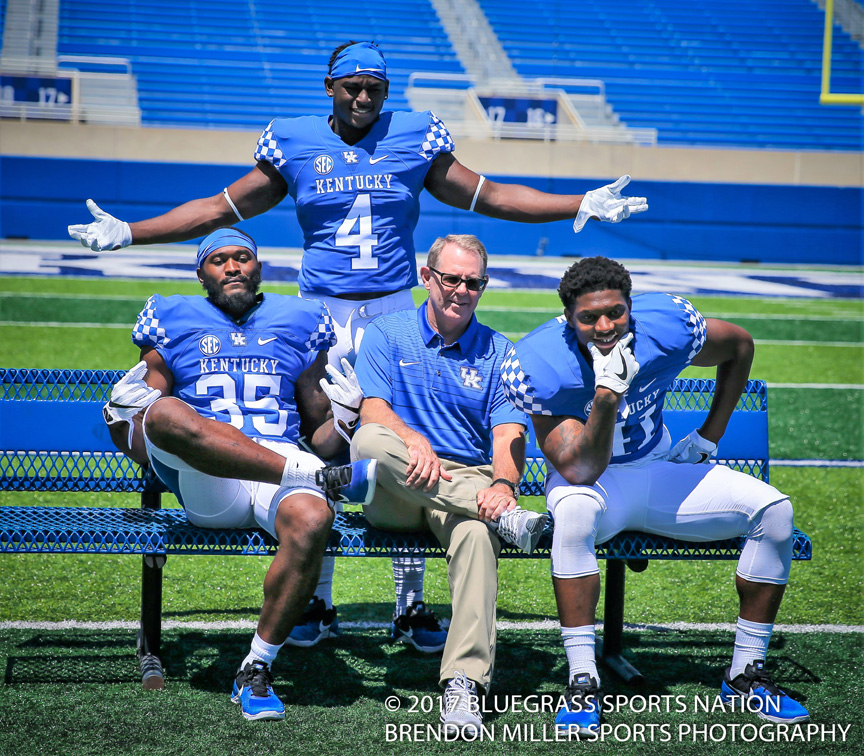 Coming off of their first Bowl appearance since 2011, the Kentucky Wildcats began fall practice on Sunday.  With a change in NCAA rules, practice got started this year, one week early, but two-a-day practices are no longer allowed.  It’s safe to say there’s more excitement throughout Kentucky for the upcoming season, than there has been in years.  Coming into his 5th season as the UK Coach, Mark Stoops said on Sunday, “We’re going into year five.  We ought to be better in all areas.”

One area that’ll need to be better this year will be the running game.  Last year the cats rushed for 3,044 yards as a team (second highest ever in school history).  That was before the departures of Senior JoJo Kemp and big playmaker Stanley “Boom” Williams.  Leading the depth chart at RB this year is sophomore phenom Benny Snell Jr.   Last season Snell broke six UK freshman rushing records with his 1,091 yards and 13 touchdowns on just 186 carries.  Splitting the carries with Snell will be Junior Sihiem King and red-shirt Freshman A.J. Rose.  Also in the mix is true freshman Bryant Koback.  Koback enrolled at UK early and skipped spring practice due to injury.  If he can get healthy, look for him to be in the thick of things as the season rolls around.  Insider tip: Look for UK to pass more to the RB position this year opening up a new aspect of the game that we haven’t seen in awhile.

Last year after quarterback Drew Barker went down in the second game, junior college transfer Stephen Johnson stepped in and led the cats to a 5-4 record, completing 145 of 265 passes for 2,037 yards and 13 touchdowns.  Johnson also carried the ball for 97 times for 327 yards and 3 touchdowns.  Going into the 2017 year, Stephen Johnson appears to be at the top of the depth chart but when Coach Stoops was asked if there is a QB competition on Sunday he said, “Of course. There’s a competition at every position, every day.”  Look for Drew Barker to put pressure on the returning starter as the word on the street says Barker has been “killing it” in practice this week.  Also, look for red-shirt freshman Gunnar Hoak to compete for a starting position.  With three quality options at quarterback this year, look for everyone’s game to be elevated.  My prediction is that senior Stephen Johnson takes the field as starting QB this year for the Cats and finishes the year as the starting QB for the Cats.

Over at the wide receiver position, Kentucky will have a pool of players to pick from.  Returning starters include Dorian Baker and Garret “Juice” Johnson with a host of others competing for playing time.  Most notably of that group is Senior Blake Bone.  Bone came to UK as a four star recruit at the wide receiver position and caught 14 passes his freshman year, 20 his sophomore year but only 5 receptions in his junior year.  Coach Stoops said that he and Bone had a conversation in the spring and “I drew a line in the sand. And I’m proud to say that he has responded very well.”  Hopefully Bone or one of the many other wide receivers in camp, will step up and fill the gap left by graduate transfer Jeff Badet who led the team last year with 31 catches for 670 yards before deciding to transfer to Oklahoma.

Senior Center Jon Toth entered the NFL draft last year leaving a hole in the middle of the offensive line.  Sliding over to fill the gap is junior Bunchy Stallings who started 8 games at right guard last year.  Senior Nick Hanes will move from left guard to right guard while sophomore Logan Stenberg (2016 All Freshman Team) will make the start at left guard.  Seniors Cole Mosier and Kyle Meadows both return to their starting positions at left and right tackle respectively.  Junior tight end C.J. Conrad, with 19 receptions for 262 yards and 4 TDs in 2016, will bring veteran leadership back to that position.  Conrad was limited in the spring due to a shoulder surgery but should be ready to go when the season starts.  Look for Conrad to be a valuable asset in the running game and break loose Benny Snell for some big gains in 2017.

The Cats averaged 30 points per game last season scoring a total of 30 touchdowns and with 24 of those touchdowns walking out the door due to graduation, transfer, or declaring for the NFL, UK’s offense will have to find new faces in the end zone.  I believe Mark Stoops and staff are up for the task and I’m looking forward to seeing what this team has to offer.  Now it’s time to “Go to Work”!

Check back next week for the 2017 UK Football Defense and Special Teams Preview.