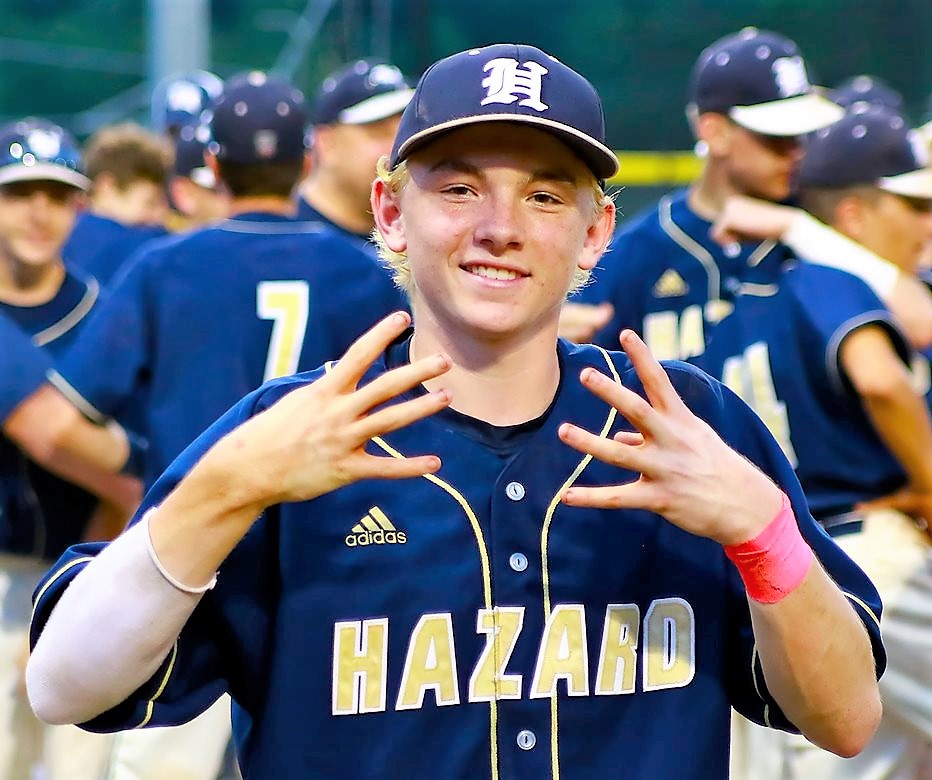 Hazard rode their hot bats to victory in Whitesburg on Tuesday Night. The Bulldogs totaled 14 runs on nine hits in four innings to close out Breathitt County in 5 innings, 14-2, to again be Champions of the 14th. For the three games in the Tournament, Hazard totaled 40 hits and 40 runs. Hot bats to say the least!

Breathitt came into the Championship Game on a wave of momentum, upsetting Perry Central on Saturday, and then advancing to the Championship Game on a thrilling victory over Powell on Monday Night. Breathitt opened the top of the 1st riding that momentum with three consecutive one out singles by Cameron Stacy, Lane Weddle, and Jaylen Turner to load the bases on Hazard starter Andy Baker. Isaac Bostron then came up with a two-out single to left to score Stacy and put the Bobcats up 1-0. Baker then got Nick Correll looking to end the inning and threat.

Hazard then took matters into their hands and put up a 10 spot in the bottom of the inning to effectively end the game. Andy Baker led off being hit by a pitch, and Kyle Johnson tripled, scoring Baker. Dalton Baker then singled to left scoring Johnson. 2-1 Hazard. Bailey Blair next bunted for a single and Andrew Ford bunted and reached on an error loading the bases. Jarrett Napier was hit by a pitch scoring Dalton Baker, making it 3-1, and knocking Bobcat starter Correll from the game in favor of Cameron Stacy. Sawyer Patrick singled off Stacy to score both Blair and Ford, 5-1. Garrett Miller walked loading the bases again, and Napier then scored on a squeeze by Johnson, making it 6-1, with the 1st out recorded. Andy Baker was hit by a pitch for the 2nd time in the inning, loading the bases again. After Kyle Johnson flew out, Dalton Baker doubled scoring Patrick and Miller, and Blair doubled scoring both Bakers. End of the 1st – Hazard 10 – Breathitt 1.

Hazard would add two runs in the 2nd, and a run each in the 3rd and 4th. Breathitt added a single run in the 3rd as J.T. O’Hair drove in Jaylen Turner.

Andy Baker got the win going three innings and giving up two runs. Bailey Blair pitched the 4th and 5th.

With the win Hazard has cemented the legacy of Coach John Meehan in 14th Region lore. Meehan is now 15-0 with 5 Titles in the last 6 years. The sole exception is 2015 when Hazard did not make the regional.

Also, this was the final chapter in 14th Region play for a quartet of Bulldog Seniors whose exploits will likely never be equaled. Seniors Bailey Blair, Andy Baker, Kyle Johnson and Dalton Baker completed their careers as 4-time 14th All A Classic Regional Champions, and now 14th Region Champions. Since their Freshman season, this group has a 114-38 record, and are 12-0 in the 14th Region Tournament. During that span, Hazard scored 107 runs and gave up only 20 in Regional Tournament play! For the Championship Game, this group, who bat 1-4 in the Hazard lineup, were 6 for 11, with 9 RBI’s and scored 8 runs. Johnson, Dalton Baker and Blair each had 3 RBI’s. Blair was named Tournament MVP. The accomplishments of this Class may not be seen again in the 14th, or the Commonwealth!

Hazard advances to the Super Regional to play the winner of the 13th Region which will be either Corbin or Barbourville. The game will be held on Saturday, June 1st at Morehead State University.