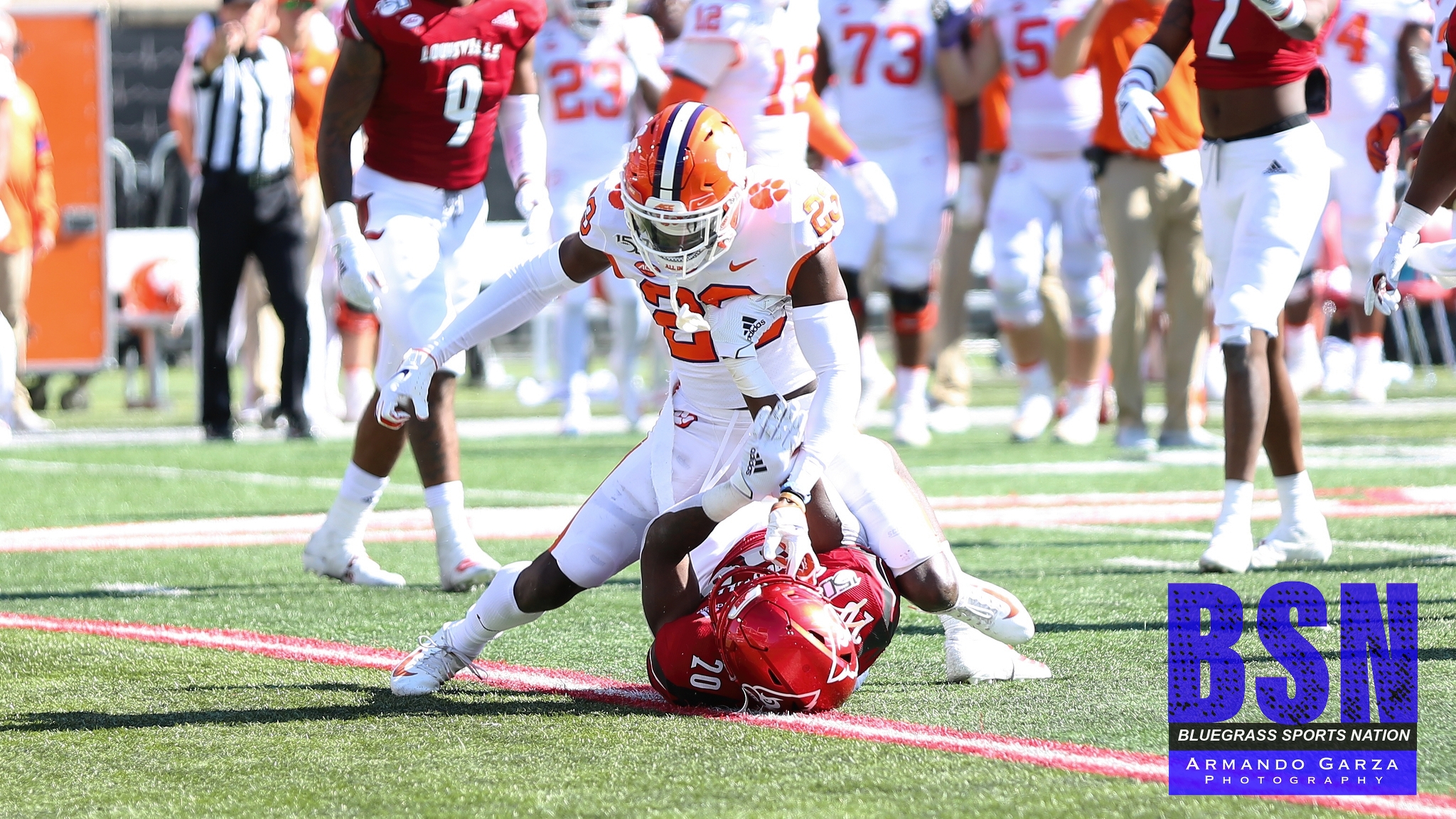 A recap of the game between the University of Louisville Cardinals and the defending college football national champion, Clemson University Tigers!

Since Biblical times, it has been one of The Bible’s great story lines. The story of David and Goliath. You know the one. Every time a football team beats a team for which it appears ill-matched, the accomplishment is often likened to one of history’s first great upsets.

Well, when I left my home in Jackson, Kentucky, bright and early this morning to catch the noon kickoff of the Louisville Cardinals football game against the defending national college football champion from 2018 (and top-rated 2019 team) Clemson University, I was hoping to see such an upset. Of course, there is one key issue about comparing the two encounters. David (luckily) felled Goliath quickly (with one single shot between the eyes). This “David” was going to have to “slug it out” with this “Goliath,” toe-to-toe, for four quarters.

The Louisville Cardinals, sporting a 4-2 record, entering the game, and coming off a road win over 19th ranked, ACC-foe, Wake Forrest, may have appeared more likely to topple Clemson than the biblical David appeared poised to topple the chosen champion of the Philistines, the biblical Goliath, at least to casual observers. Let me assure you, the tiny little herder from Israel had a much better chance than the Cardinals actually had on Saturday afternoon at Cardinal Stadium.

The biblical, David had a leather pouch with two long cords from which he could sling a projectile with deadly accuracy. He had an opponent heavily armored who couldn’t move well, may not have seen very well, and who posed little threat of harm to David so long as the little slinger of stones could stay outside of spear and sword range.

Louisville, on the other hand, was going to have to slay this “giant” up close and personally. This giant’s vision was just fine and he was fast as heck with the nimble grace of a gazelle.

The ultimate lesson the “David-Goliath” story is to enforce is that when a powerful competitor takes on a smaller one, the smaller one might nevertheless win. Well, that is just lovely in theory. However, it appeared a lesson for another day, another time, and for a battle between two different foes. This time, David would get his little rear-end kicked.

In a game for which the final score was deceptive, as Louisville hung around for a half before yielding 28-points in the second half and 21 in the fourth quarter alone, QB Trevor Lawrence would shake off two early picks to complete 20 of 29 attempts for 233-yards and 3 passing TDs. Travis Etienne, who had a fine game a year ago, in only 8 carries, had to carry it 19 times today. However, he gained 192-yards, scored a rushing TD, and averaged 13.7 yards per attempt.

Louisville couldn’t get anything going offensively with any consistency. Louisville was finally able to strike for 6, but had to wait until deep into the 4th quarter before that could be said.

Having just written that, one has to be very impressed with freshman running back, Javian Hawkins, from Titusville, Florida. Hawkins gained 129-yards rushing, on 26-carries, with a rushing TD and a long of 25-yards while averaging a tad over 5 yards per carry. The Clemson game would be his 4th of his freshman year, so far, which would see the Floridian go over 100-yards rushing in a college football game. He is only the 3rd freshman running back in program history who can lay claim to such an accomplishment.

Clemson gained 551-yards of total offense on the day to Louisville’s 263. We predicted in our article written early in the week highlighting this upcoming matchup that these were two high-powered and high-performing offensive football teams over their first six-games. In game seven, one of the two offenses remained both high-powered and high-performing while the other, well…

Overall, the defense played better than expected notwithstanding the 45-points yielded. Louisville held Clemson to under 50% in 3rd down conversion rate and were better than that until Clemson got on a roll in the 4th quarter.

In his post-game press conference, Coach Satterfield called the Tigers the gold-standard among college programs, and that certainly appeared true on Saturday afternoon. Satterfield also told the press corp he saw many things on which to build and many brighter days ahead for his program. All of those things appeared equally true, the final score be darned.

Louisville has Virginia for Homecoming next weekend. Satterfield calls the matchup with Virginia a huge matchup for his young Cardinals who will have a chance to push its record to 5-3, if they prove up to that task. Luckily, Virginia is a “Philistine” which is much more our size than the Goliath we encountered today.

This is Fletcher Long, your University of Louisville corespondent for Bluegrass Sports Nation reminding Cardinal Nation to sho up every week and to PLAY THROUGH THE WHISTLE!