Abernathy Walks Off No. 10 Kentucky Past Illinois State To 17-0 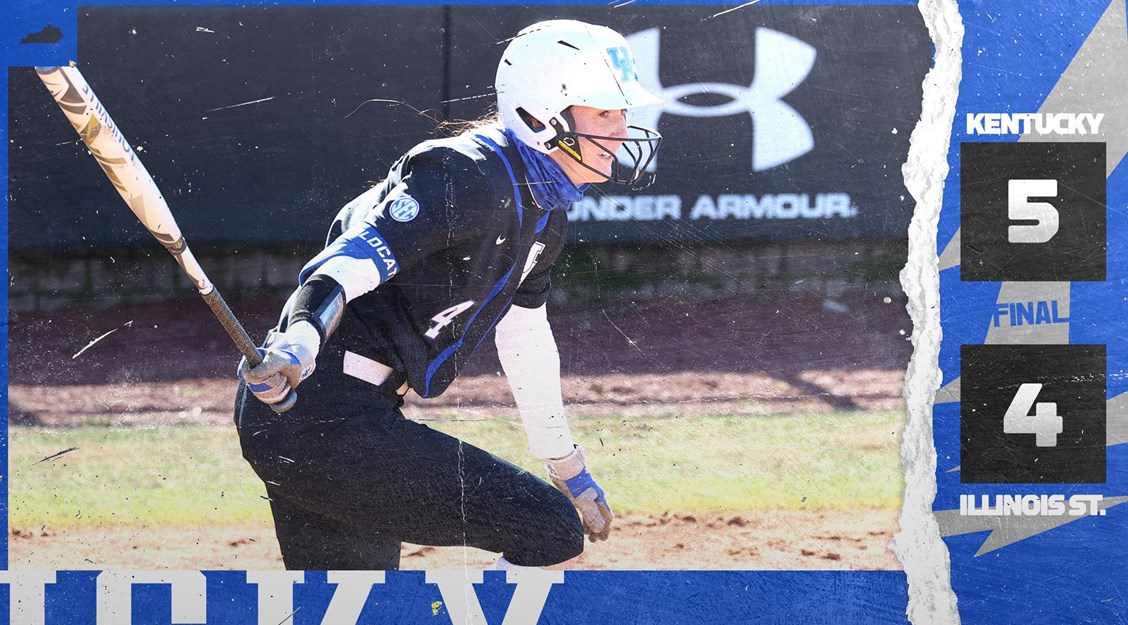 Wildcats score in bottom of seventh to win

For the second time in as many weeks, junior outfielder Renee Abernathy walked Kentucky off with a win, as her base hit up the middle scored Kayla Kowalik to bolster UK past Illinois State, 5-4 on Friday morning.

Kentucky trailed entering the bottom of the sixth inning by a pair of runs, but put up a three spot in the inning thanks to an RBI single by Grace Baalman and a go-ahead, two-out two-run home run by Autumn Humes to give UK the 4-3 lead.

The Redbirds hit a lead-off home run in the top of the seventh to even the score, but the Wildcats responded like champions, scoring the winning run with one out in the bottom of the seventh.

Kayla Kowalik was absolutely sensational on Friday morning, going 4-for-4 at the plate with four singles, three lead-off singles and eventually wound up with the game-winning run in the bottom of the seventh on Abernathy’s RBI single up the middle. Kowalik on the season is striping the ball at a .574 clip with a monstrous 30 runs scored and 21 runs driven in.

With the win Kentucky is now a perfect 17-0 on the season, and moves to 3-0 in the FAU Parents’ Weekend Tournament in Boca Raton. The Wildcats will play once on Saturday, in a 5:30 p.m. ET affair with Coastal Carolina. Live stats for that game are available on UKathletics.com.

The two-run deficit was the largest that UK faced this season, and it didn’t even last a half inning, as the Wildcats put together a two-out rally in the bottom of the sixth that ultimately proved to be one of the key differences in the game.

Autumn Humes pitched one inning and got the win in the circle. Baalman went 6.0 innings, allowing four runs with no walks and seven strikeouts. Humes is now 7-0 pitching this season for UK.

3. Kentucky put up a three spot in the bottom of the sixth inning, as the Wildcats didn’t let a two-run deficit, its largest of the season to this point, phase them.

Kayla Kowalik was the key player in the game going 4-for-4 at the plate with four singles, and scoring the game-winning run.

The key play in the game was Autumn Humes’ two-run home run in the bottom of the sixth inning. With UK trailing 3-2, Humes stepped up and clobbered her fourth moonshot of the season to put UK up, 4-3 entering the seventh inning.

Illinois State struck first on an RBI single following a lead-off double in the top of the first. ISU 1, UK 0

Kentucky responded as Kowalik scored on an error during Mallory Peyton’s at bat in the bottom of the first. UK 1, ISU 1

Kentucky in the bottom of the sixth put up a three spot on three critical hits. Mallory Peyton doubled, and pinch runner Vanessa Nesby scored on Grace Baalman’s RBI single with two outs. Then Autumn Humes delivered a home run to put UK up. UK 4, ISU 3

In the top of the seventh, a lead-off home run for the Redbirds tied the game. UK 4, ISU 4

In the bottom of the seventh, Kowalik led off the game with a single, and Coffel beat out a bunt to put two on with no outs. After a strikeout, Abernathy lifted the game-winning single over the pitcher’s head and into center to walk it off for the Wildcats. FINAL – Kentucky 5, Illinois State 4