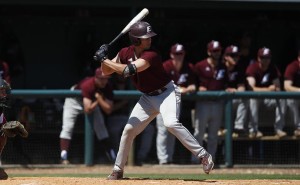 RICHMOND, Ky. – Less than a week after being drafted by the New York Yankees, Eastern Kentucky University’s Mandy Alvarez picked up more postseason accolades on Wednesday when he was chosen to the 2016 American Baseball Coaches Association (ABCA)/Rawlings NCAA Division I All-Region team.

Alvarez was a second team choice at third base in the South Region.  The first team all-region selection at third base was Tennessee’s Nick Senzel, the No. 2 overall pick in last week’s Major League Baseball Draft.

Alvarez was drafted by the New York Yankees in the 17th round on Saturday.

The senior was the Ohio Valley Conference Co-Player of the Year this past season.  He had a .409 batting average, 97 hits, 13 home runs and 58 RBIs.  At the end of the regular season, he had more hits than any other player in NCAA Division I baseball and currently leads the nation with an average of 1.76 hits per game.  The Miami, Florida native was a first team All-OVC selection and is a semifinalist for the Gregg Olson Award, which is given to the breakout player of the year.

Alvarez has been assigned to New York’s short season Class A team on Staten Island.  The season-opener for the Staten Island Yankees is Friday at Brooklyn.