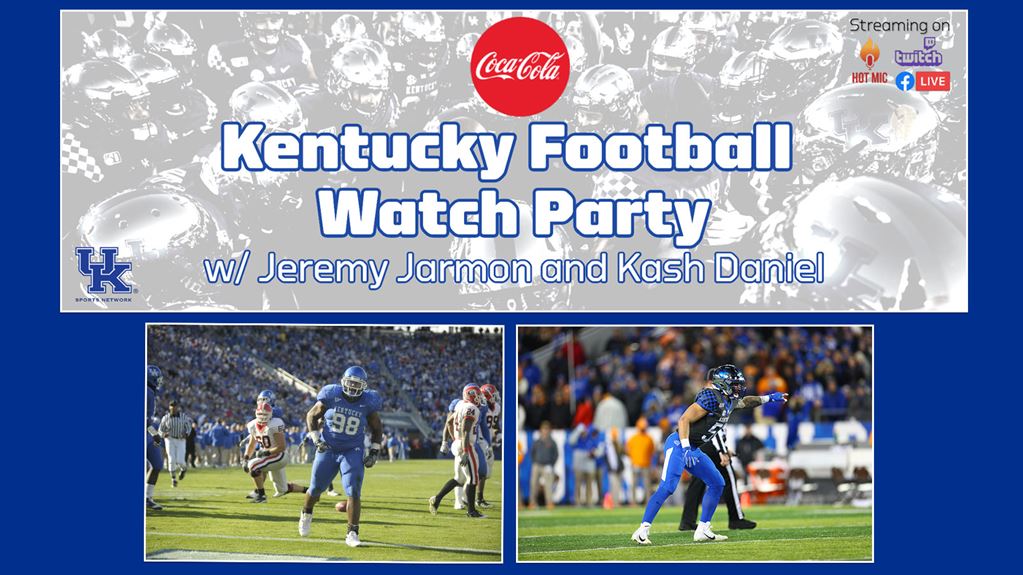 In a football season certain to be different than any other in program history, a pair of Kentucky football legends are going to help Big Blue Nation connect with each other and experience game day in a brand new way with the launch of the UK Football Watch Party, presented by Coca-Cola.

Every Saturday during Kentucky football games, Wildcat legends Jeremy Jarmon and Kash Daniel will host a live stream that features special guests and provides commentary on the game, stories from their careers and interaction with fans. The UK Football Watch Party, presented by Coca-Cola, will stream through the Hot Mic and will allow football fans to enjoy the television broadcast while enhancing the experience by connecting with Jarmon, Daniel and special guests live on a second screen. Fans streaming on HotMic will take advantage of proprietary sync technology ensures that all watch party participants are viewing in real time. HotMic users simply hit the ‘Sync’ button on their app, and HotMic calibrates to the broadcast audio, ensuring that the BBN is given a fun, spoiler-free second screen experience. The stream will also be available on the University of Kentucky’s Twitch channel and the UK Sports Network’s Facebook page.

“The Kentucky football program and Big Blue Nation will always hold a big piece of my heart and I am so excited to partner with the UK Sports Network and spend game day with the best fans in the world,” Daniel said. “Jeremy and I are going to have a lot of fun this season supporting the Cats with our BBN friends.”

“I look forward to football season every year and even more so this year,” Jarmon said. “With most of Big Blue Nation planning to experience Kentucky football at home, I can’t think of a better way for us to connect with each other and celebrate what is sure to be a memorable season for our Wildcats.”

In addition to co-hosting the UK Football Watch Party, presented by Coca-Cola, Jarmon also returns to the Don Franklin Auto Countdown to Kickoff pregame radio show, along with Christi Thomas and former Kentucky quarterback Dusty Bonner. The 2020 season marks the third year together for the trio on the show, which airs two hours prior to kickoff across the UK Sports Network on radio affiliates statewide. The Don Franklin Auto Countdown to Kickoff pregame show will also be on-site at Kroger Field for all home games this season and a live stream of the show will be available on the UK football Facebook page and UKathletics.com.

Once the game action gets underway, The Voice of the Wildcats, Tom Leach, will handle the play-by-play call for Kentucky football games on the UK Sports Network for the 24th consecutive season. Former Wildcat Jeff Piecoro will again serve as Leach’s broadcast partner and Dick Gabriel returns as the sideline reporter. Gabriel will also serve as host of the postgame show, The Ruoff Mortgage Wildcat Wrap-Up, which features post-game analysis, a player of the game interview and post-game comments by head coach Mark Stoops. Darren Headrick, voice of Kentucky baseball and women’s basketball, also returns to the broadcast team as the studio host.

In preparation for each week’s game, fans are encouraged to subscribe to the Behind Kentucky Football podcast, hosted by Curtis Burch, which takes Big Blue Nation inside the UK football program through conversations with coaches and players. The podcast is available on iTunes, Spotify and SoundCloud.

About JMI Sports
JMI Sports is a full-service collegiate marketing firm providing the highest quality management of athletics multimedia rights, working hand-in-hand with each partner in the pursuit of their success. The company serves to maximize each clients’ economic potential through customized marketing and branding initiatives. JMI Sports manages an impressive list of signature partnerships including the University of Kentucky, Rupp Arena at Central Bank Center, Clemson University, the University of Pennsylvania, the University of Pittsburgh, Harvard University, and joint-venture properties of the University of Georgia and Columbia University (with Learfield IMG College), and University of Notre Dame (with Legends). JMI Sports also represents several high-profile conferences including the Ivy League, the Mid-American Conference, the Mountain West Conference, the Southern Conference and the Patriot League. Additionally, JMI Sports holds Total Campus Marketing rights in partnership with the University of Kentucky and Clemson University. Founded in 2006 by Erik Judson and technology entrepreneur John Moores, former owner of the San Diego Padres, JMI Sports is also a highly regarded project manager for the development of collegiate and professional sports facilities.

About HotMic
Founded in early 2019, HotMic is a unique watch party platform that can synchronize to any television by simply listening to it, connecting fans from all over in real time without delays or spoilers. With ofﬁces in the U.S. and United Kingdom, HotMic is leading a global watch party revolution focused on live sports, bringing a fun, interactive and you-have-to-be-here atmosphere for all sports fans. HotMic’s mission is to work with partners to create a new kind of social network that values engagement over distraction, and collaboration over competition. For more, visit www.hotmic.io, and download the HotMic app in the App Store and on Google Play.