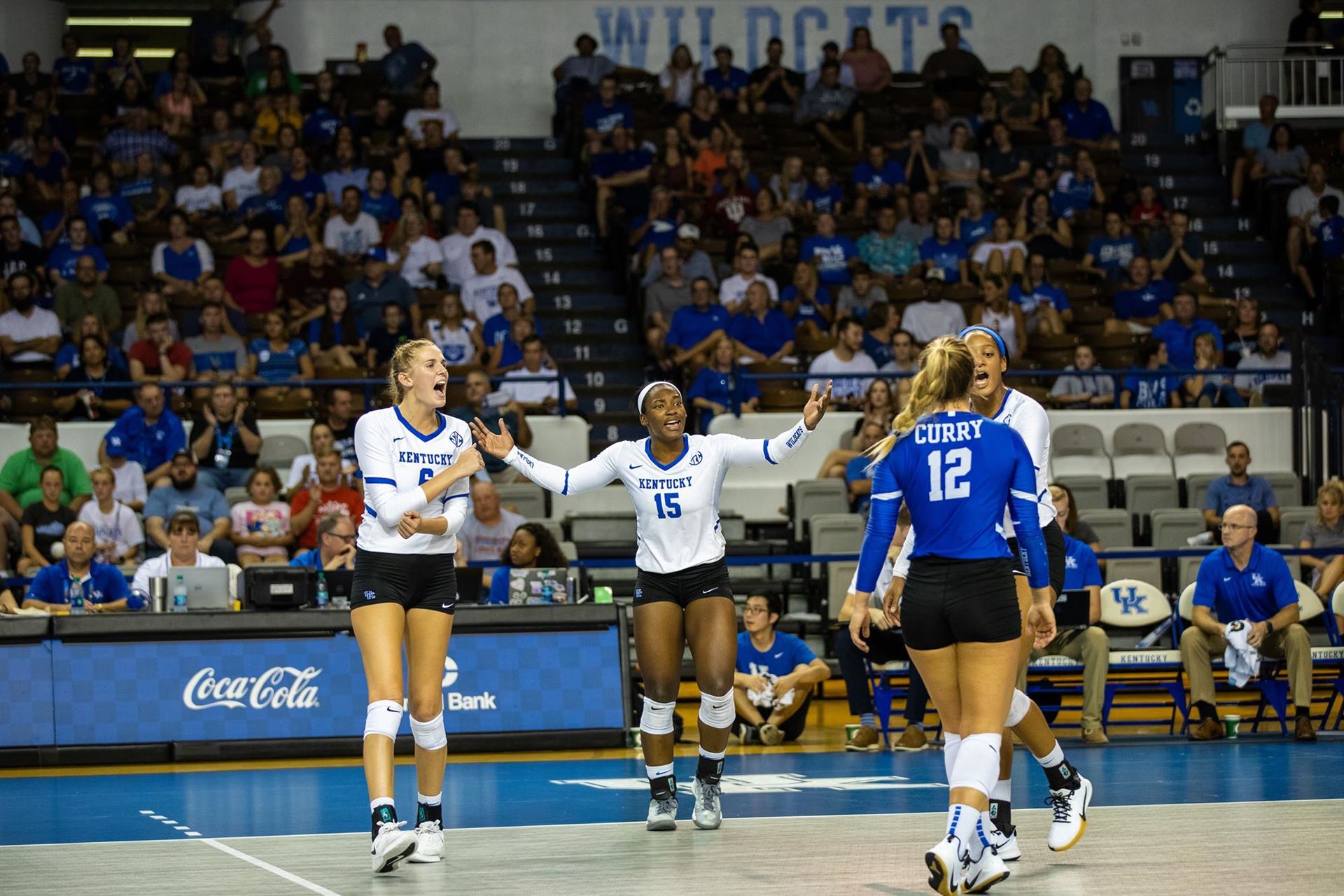 Wildcats sweep Gamecocks, setting up showdown in Gainesville on Sunday

With the win, Kentucky improves to 19-6 on the season and is now 12-2 in Southeastern Conference play. South Carolina falls to 16-9 and is 8-5 in league play this season.

“South Carolina is a low-error team, so we knew we would have to score in transition tonight,” UK head coach Craig Skinner said. “Madison did a great job of distributing our offense. To have over 50 kills in a three-set match is big. Just as importantly, we won the serving and passing battle tonight.”

With a 12-2 record in SEC play, the Wildcats will return the trip to Gainesville, Florida on Sunday afternoon at 3 p.m. ET for a showdown with the 13-1 No. 11 Florida Gators. The match will be shown live on the SEC Network, ESPN3 and the ESPN app with Tiffany Greene and Missy Whittemore on the call from The Swamp.

It was a balanced attack all night long for the Wildcats, who ended the three-set match with Lead Edmond (13), Tealer (12) and Alli Stumler (10) all with double-digit kills on the night. Tealer hit .688 on the night – the highest hitting percentage for the freshman from Prairie View, Texas in her young Wildcat career.

All of the offense was dictated by Madison Lilley, who connected on 38 assists and helped UK to hit .600 as a team in the second set alone. The junior from Overland Park, Kansas also contributed five kills, including the set-ending kills in the first and second sets.

Defensively, it was Gabby Curry and Stumler leading the way along the back row with eight digs each. UK stymied the Gamecocks to just a .202 hitting percentage, including a .062 number in the third set.

Leah Edmond went on a 3-0 serving run to take a 5-5 opening set into an 8-5 UK lead. For Edmond, she sprinkled in a pair of aces in the three points that UK won on her serve, the first two aces for the Wildcats of the match. USC called its first timeout at 8-5 after Edmond’s serving run. Sophomore Alli Stumler notched her second kill of the set to make it 13-8 and forced the Gamecocks into their second timeout of the set. Kentucky slowly built its lead to a set-high seven points at 20-13 off of freshman Azhani Tealer’s second kill of the match. USC closed to 22-18, but UK saw things out from there taking the opening set, 25-19. UK hit .293 in the first frame as Edmond’s five kills led the way. Tealer had four kills and Lilley contributed 14 assists on the Wildcats’ 17 kills in the frame.

Kendyl Paris became the fourth different UK player to drop in an ace in the match as she pushed the Wildcats into their first lead of the set at 7-6. Kentucky won four points in a row and Stumler’s fourth kill of the match made it 11-7 UK as the Gamecocks called their first timeout of the set. Following the timeout, Lauren Tharp dropped in UK’s sixth ace of the match on the next point to extend UK’s lead to 12-7. The Gamecocks were able to withstand a UK challenge because of a lack of evidence and closed the gap to 15-14 to prompt the Wildcats into their first timeout of the match. After Carolina rallied to get things level at 15-15, UK won three points in a row and a stuff block by Paris at the net capped off the run as USC burned its final timeout. Kentucky gained sizeable separation to take a 22-17 lead, with the five-point lead matching the best of the set. UK closed the match on a 7-2 run and for the second set in a row, Lilley hammered home the clinching kill to put the Wildcats up two sets to none.

Kentucky raced out to a 5-1 lead and then compounded the Gamecock problems by extending it out to an 11-4 lead and pushing USC into an early timeout. After UK won the next two successive points on a Stumler kill and an illegal contact, Kentucky found itself up 13-4 and South Carolina pulled out its final timeout to try and stymie the momentum. The Wildcats led by as much as 19-10 in the set and from there, cruised to a sweep as Tealer’s career-high 12th kill ended the match.