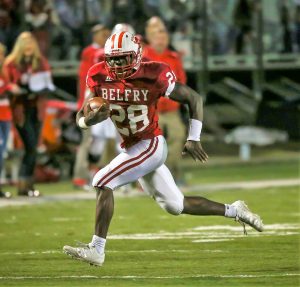 Belfry played host to the 2016 State Champions, Johnson Central, in what is a battle of two of the top teams in their respective classes. Belfry enters the game 8-1 and the top team in Class 3A, with their only loss being to West Virginia power Huntington on opening night. Since their opening night loss, Belfry has manhandled the rest of their schedule to a tune of 8 straight wins. Belfry has scored 403 points for a 50.6 per game average while giving up 96 points for a 12 point per game average.

Johnson Central would take the kickoff up to their own 36 yard line and would now be playing from behind after losing an early 19-0 lead. The quarter would end with the Golden Eagles in unfamiliar territory trailing 21-19 to the Belfry Pirates. Belfry would force Preece out of the pocket and would come away with an interception on an ill advised pass. The Pirates would take over right at midfield with 11:49 to go in the game. The momentum clearly on Belfry’s side after a sluggish start to the game. Browning would break a big run and gain a first down after breaking a couple tackles while getting the ball down to the Golden Eagles 19 yard line. The Pirate would then hit Taveon Hunter on a 14 yard scoring play to open up a 28-19 lead.

The Pirate rolled off 28 unanswered point to stun the Golden Eagles midway through the final quarter. Johnson Central would go 3 and out at a bad time during the game and punted the ball back to the now red hot Belfry Pirates. Belfry would push across another touchdown to put Johnson Central down 35-19, which would be the final score.

Belfry has now one 9 in a row for a 9-1 record and will open their tournament play at home against Thomas Nelson while Johnson Central fell to 8-2 and have lost back to back games for the first time since 2009. The Golden Eagles will open against Mason County next week.