BATTLE OF THE BLUEGRASS: UK DEFEATS THE CARDS IN A ROUT. KENTUCKY 90- LOUSIVILLE 61. 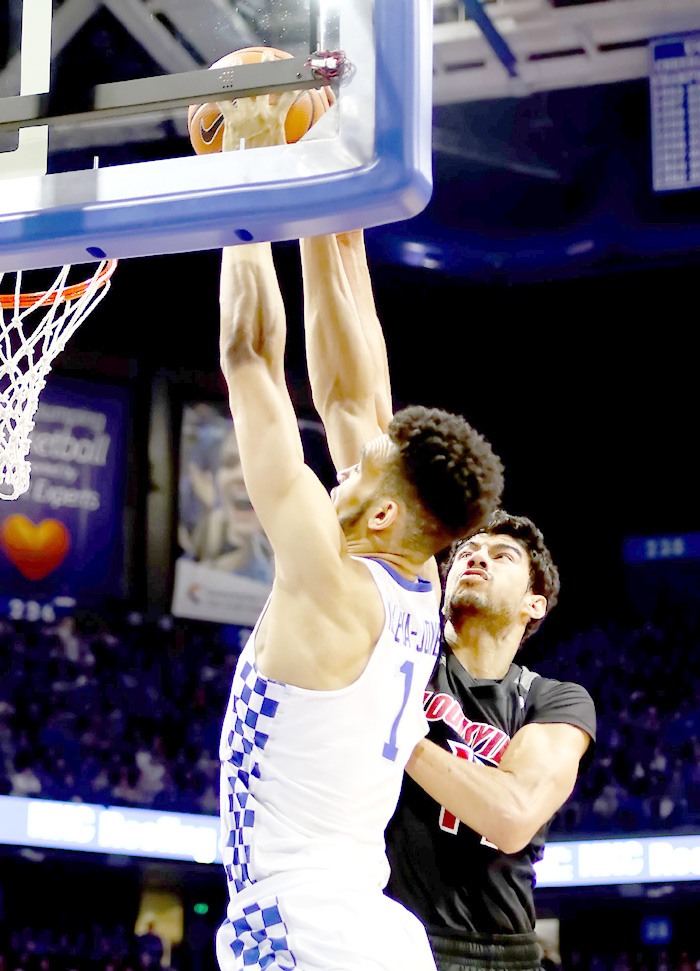 Lexington, Kentucky- As the world recovers from the Holiday season and College Football bowl games dominates the world of sports.  The annual rivalry between the University of Kentucky Wildcats and the Louisville Cardinals captivates fans across the commonwealth and country.

The game is one of the biggest rivalries in all of sports and a game that will get a huge T.V audience, as the game Is featured at 1:00 pm just before the major College Bowl games kick off.  Sure, the Battle of Tobacco Road between North Carolina Tarheels and the Duke Blue Devils is considered by many sports analysts as the biggest rivalry in all of College Basketball.  UNC and Duke play in the same conference (ACC) with each team playing on each other’s home court at least once during the calendar year, the teams have a potential to play each other two to four times per year.  UK vs U of L is a game that only occurs once per year, possible twice if the teams meet in the NCAA tournament, making the stakes even greater and more anticipated than the Tobacco Road rivalry. I grew up an avid College Basketball fan and have never been able to attend the rivalry until today, attending this game has been on my bucket list for years.  The battle today features two of the most successful programs in the history of college basketball, with two of the biggest fan bases in the country.  Kentucky leads College basketball in all time wins with 2237, and all time winning percentage with .765%.  Louisville has been a historic program as well with 1803 all time wins, good for tenth place in all time wins, and have a .667 winning percentage putting the cards in seventh place.

History of the Rivalry– stats have been provided by Wikipedia

Kentucky entered today’s contest with a nine and two record. UK lost the previous game last Saturday December, 22, 2017 to the UCLA Bruins in the CBS Sports Classic in New Orleans, Louisiana. With the loss Kentucky dropped in the AP poll to sixteenth place, previously ranked in 7th place.  Louisville enters today’s contest unranked and has a 10-2 record overall.  Louisville is on a current seven game win streak and last defeated Grand Canyon University 74-56 on December, 23rd, 2017.

To say that the Louisville Cardinals Basketball teams has had a challenging year, would be an understatement.  This year Louisville has been rocked with two major scandals and allegations, following the firing of Former coach Rick Pitino and Former Athletic Director Tom Jurich. The first scandal involved the Louisville Basketball team that allegedly paid for female escorts, when recruits where on recruiting trips to the University.  The NCAA has led the investigation and found Louisville to be negating. The University was faced with severe sanctions including the possible removal of the school’s 2013 National Championship. The second controversy also involved a direct recruiting violation, in which Pitino directly denied any knowledge of wrong doing, maintaining the school’s and his innocence.   Pitino who once coached at UK from the late 1980’s to the mid 1990’s was fired from Louisville in September with allegations that the Coach and Adidas payed $100,000 to a highly coveted Nationally ranked recruit, who later committed to the University.  David Padgett who played for the Cardinals from 2005 to 2008 is the interim head- coach following the Pitino Scandal.  The rivalry between the CARDS and the CATS isn’t quite the same with Pitino gone, regardless it’s still a highly anticipated matchup with two historic programs and two fan bases that strongly dislike each other, creating an exciting atmosphere.

Kentucky gets the tip and scores on the opening possession, with a great play from Hamidou Diallo.  Diallo catches the ball on the baseline, pump fakes the ball and drove to the basket finishing with a phenomenal two hand slam. Louisville is unsuccessful on its opening possession, and Kentucky capitalizes on the other end with a three- point basket from Quade Green.  Kentucky starts the game focused and the fans were pleased with the effort of the young CATS provided on the first two possessions.  Louisville calls a quick timeout, and The CARDS make a run of its own, thus quieting the Rupp Arena Crowd.  Louisville answers the game with an eleven and 0 run, with great play by Senior guard Quentin Snyder and power- forward Ray Spalding. Kentucky regressed and began to settle for contested three- point shots, not Kentucky’s best style of Basketball.  Kentucky goes cold from the field and experiences a four- minute scoring drought. Kentucky calls a quick timeout and Coach Calipari settles down the young team.  Kentucky answers the slump with an 8-0 run and takes the lead, leading by two points just before the under twelve media time-out.  The teams trade baskets on the next couple of possessions.  Louisville pounded the ball down low to big man Ray Spaulding, and UK uses the teams quickness and athleticism to score the ball on the other end.  The game is tied at twenty- one with 8:04 remaining in the first half.  Kentucky creates a little breathing room as the team goes on a nine and zero run.  UK fans are now excited and every scoring possession, the Rupp Arena patrons get a little louder.  Hamidou Diallo takes the intensity of the crowd up a few decibel ratings with back to back scoring plays, and increasing the lead to twelve points.  UK 35- Louisville 23 with 1:50 remaining in the game.  Diallo got in transition scoring the ball with a spectacular dunk on the first play, and the next possession steals the ball from Snyder finishing with a lay- up on the other end.  Rupp Arena is now louder than I can ever recall at any point this season.  Kentucky Takes a comfortable fourteen- point lead to the locker room at intermission.  Kentucky 41- Louisville 27 at the half.

Kentucky played a great first half, other than the lull experienced early in the game.  Kentucky shot the ball at an exceptional rate from both the field goal and three- point shots.  Kentucky shot 13-32 from the field 40%, and 3-6 from behind the ARC, going 50% in the half.  Kentucky was also very effective scoring the ball at the charity stripe, shooting 66%.  Kentucky had a balanced scoring attack led by Hamidou Diallo with eleven points.  PJ Washington played his best half of his young career, being a force on the boards grabbing four rebounds and scoring ten points.  Shai- Gilgeous Alexander was also spectacular grabbing three rebounds, scoring seven points, and three assists.  Louisville was ice cold shooting the ball in the half only connecting on 1 three- point basket, shooting 9% for the half.  Louisville also struggled to t score te ball from the field being 11-37, shooting 29% in the half.  Louisville is led in scoring by Ray Spalding with six points.  Quentin Snyder was also effective in the game scoring four points and three assists.

Kentucky developed a comfortable lead with a balanced scoring attack and spectacular plays from Diallo, Alexander, Green and Washington in the first half.  The Momentum continues to build in the second half and UK steadily increases the lead in the second half.  The CATS are up 19 points with 16:32 remaining in the second half.  Kentucky 52- Louisville 33.  Kentucky continued to score the ball, and Point Guards Green and Alexander continued to use their athleticism creating mismatches, and get the ball in transition. The lead continues to grow as Kentucky has a 15- 5 run on the Cardinals over the next five minutes and thirty- three seconds.  UK 67 Louisville 38, 10:47 remained in the game.  Kentucky is playing like a well- oiled machine, clicking on all cylinders.  The players looked like they were having fun, the Fans once again get loud creating energy that the players thrived on.  The game is now in hand and a huge rivalry victory is inevitable for the Wildcats.  Kevin Knox who is a star and one of the team’s leading scorer coming into today’s action struggled to score the ball in today’s game.  Knox scores two points with 5:17 remaining in the game, Knox first score since the first half.  Knox finished the game with only eight points, but was a force on the boards grabbing seven rebounds.  Nick Richards also struggled in today’s game, as he experienced early foul trouble, and had to sit for a significant time in the first half.  Forward’s P.J. Washington, Wenyen Gabriel, and Sacha Killeya- Jones stepped up making, contributing with hard fought rebounds, and combined for twenty -seven points between the three.  Washington had 16 points, Jones had 8 points, and Gabriel contributed with three- points.  Alexander was very effective tonight, played his best game of his career, and was extremely confident in his abilities to score and pass the ball tonight.  Alexander Finished the game with twenty- four points, five rebounds. Four assists, three steals and played a game high with thirty- three minutes.  Alexander’s Play will make him a strong candidate for SEC Player of the Week, in the upcoming polls.  Kentucky keeps the game out of reach with a lead fluctuating around thirty points, for the remainder of the game.  Kentucky Defeats Louisville by twenty- nine points.  Kentucky 90- Louisville 61.