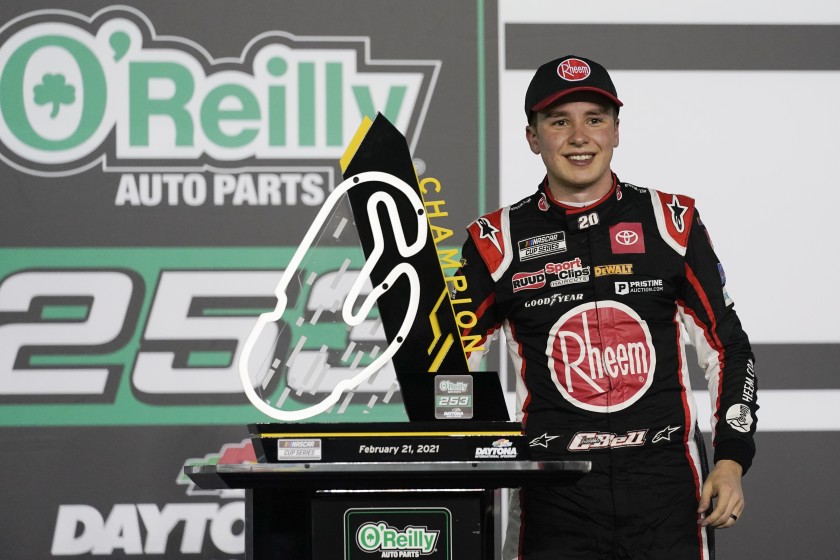 Sunday’s race will be the first of seven road course venues in 2021 modified schedule.  Chase Elliott, who is starting on the pole Sunday, won checkers the 2020 inaugural event.

One lap in and we’re already under caution for debris.  The Daytona 500 winner Michael McDowell is the first driver — but not the only one — to overshoot Turn 1.

Kyle Busch seems to have sustained some damage to his front right tire as well.  Both require costly attention to their respectful pit service.

The second caution arrives with five laps remaining in the stage; Brad Keselowski’s car appeared to lock up, resulting in a flat tire. Matt DiBenedetto suffered considerable damage to his car as well.

Christopher Bell is first, coming out of the restart but Elliott reclaims the lead with just three laps remaining in the Stage.

Elliott, Logano and Hamlin hold the top three positions heading into the restart

Keselowski, 11th, misses the backstretch chicane and had to make a stop. He lost three positions and is now 14th.

Under the fourth caution as Ross Chastain’s car hit the wall coming out of Turn 6. He was 20th at the time the yellow flag waved; Chastain’s day was over.

Lap 13 of 18 in the second stage; most of the field, meanwhile, pits under caution.

Bubba Wallace as well as Martin Truex Jr. locked each car’s in two separate incidents forcing Wallace to pits while Truex Jr. lost multiple positions in the front straight chicane.  While Elliott hit his lines and climbed back to seventh.  Not enough real-estate left in Stage 2 for Elliott to overcome.

Kurt Busch takes over the lead position in Lap 38 only to forfeit the point as Kurt Bush overdrives Turn 3, spinning through the grass resulting in a 25 position deficit.

Elliott benefits and retakes the lead heading into Turn 1.  Elliott comfortably guards in the lead with 23 laps remaining.

Elliott and C.Bell decided to pit with 18 laps remaining and both exiting pit service retaining their respectful positions.

The sixth caution flag of the day was brought out for the weather. NASCAR has left the option of rain tires to be utilized if needed.

Fourteen laps remain. Elliott, Bell and a majority of the field pitted for rain tires. Logano rolled the dice and stayed out.

Logano, Briscoe and Kurt Busch are in the top three heading into the restart, followed by Chris Buescher and Corey LaJoie in fourth and fifth.

Caution No. 7.  Highlights Elliott’s bump in Turn 21 spinning the 2020 Cup Champ in the grass.  Elliott miraculous save, surprisingly advanced him a position.

Aggressive driving with 5 to go resulted with Hamlin tagging Elliott, spinning Elliott  in the grass, once again.  Unfortunately, Elliott would lose too many positions to contend for “Back to Back” Daytona road course victories.

Logano has over a two-second lead on Bell with Kurt Busch, Hamlin and Keselowski in positions 1-5, respectively, 3 to go.

White Flag, Bell powers past Logano on the front stretch chicane for the lead and the checkers.