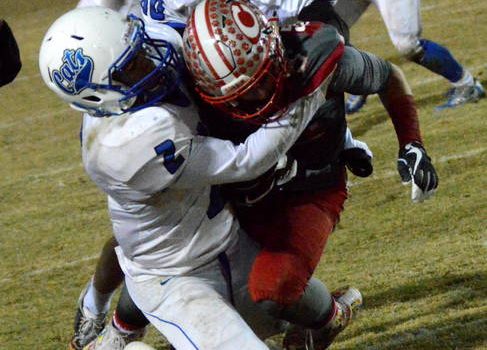 Bell County’s season came to an end on Friday in the second round of the Class 3A playoffs. The Bobcats fought through injuries and kept the game close for a half before Corbin pulled away for a 32-6 victory. Bell County ends the year with a 7-5 record while going 2-3 in the district.

“We fought hard. We got mercy-ruled the first game. We just had a point to prove,” said Bell coach Dudley Hilton. “I thought our defense kept us in the game. We moved the ball on them. It was a good game.“

Hilton said the main thing that changed from the first game to the second was determination.

The Bobcats were able to move the ball up and down the field despite losing quarterback Issac Collett early in the first quarter. Bell tallied 177 yards on the ground and 48 yards through the air.

Colby Frazier led the team with 110 yards on 16 carries. Senior Jordan Wombles finished the game with 44 yards on eight carries.

Antonio Zachery replaced Collett behind center and went 2-of-16 for 48 yards and a touchdown. Ethan Murray hauled in a 11-yard touchdown on his lone reception, while Jason Jones tallied 38 yards on his only catch.

While the offense was able to move the ball effectively against Corbin, it was the Bobcat defense that limited trips to the end zone for the Hounds. Bell allowed only one touchdown in the first, while giving up two touchdowns in the second.

It was the rushing attack that led Corbin this time as the Hounds racked up 204 yards on the ground. Cameron Sizemore bulldozed his way to a team-high 71 yards on 11 carries. Chase Estep tallied 57 yards and two touchdowns on 10 carries. Christian Gosselin ran for a 49-yard touchdown on his lone carry.

Sizemore added 175 yards and a touchdown on 13-of-20 passing. Gosselin led all receivers with 54 yards on four receptions. Jordan Fox and Cameron Barton both finished the game with 41 yards.

“Their quarterback is the real deal. He just hurt us,” said Hilton. “He had a big night. He did a good job.”

After competing at a standstill for much of the first, Corbin found the end zone with 4:01 remaining in the opening quarter on a 49-yard run by Gosselin. Will Childers converted the extra point to give the Hounds a 7-0 lead.

A Corbin turnover near the end of the first gave Bell County good field position to open the second quarter. A fumbled snap on a punt gave the Bobcats possession at the Corbin 28. After two incomplete passes, Frazier converted the third-and-10 to give the Bobcats a new set of downs as the first quarter buzzer sounded.

Three plays into the second quarter, Zachery connected with Murray on an 11-yard touchdown pass with 10:38 remaining in the half. The missed extra point narrowed the Redhound lead to 7-6.

Corbin responded on the ensuing drive moving the ball 65 yards in eight plays. Estep capped the drive with a 1-yard touchdown plunge. The extra point increased the Redhound lead to 14-6 with 6:35 remaining in the second.

After forcing a three-and-out, Corbin took over with good field position. Starting the drive on the Bell 42, the Hounds scored in four plays on a 9-yard run by Estep to increase the lead 20-6 heading into halftime.

After a silent third quarter, Corbin scored twice in the fourth on a 33-yard touchdown pass to Fox and an 11-yard run by Devyn Sams. The two scores secured the 26-point victory.

Corbin moves on to the regional championship game against Powell County.