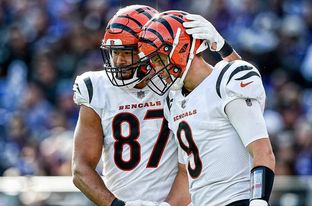 Don’t look now but the Cincinnati Bengals are for real. Zac Taylor’s squad is sitting tied atop the AFC North standings at 5-2 while currently holding on to the AFC’s No. 1 seed after stunning Baltimore on the road Sunday, 41-17.

The Ravens (5-2) took a 17-13 advantage early in the fourth quarter but Cincinnati (5-2) wasn’t fazed as the Bengals rallied and scored 28 unanswered points in a 19-minute span to record their second win in a row. The win also improved the Bengals to 2-0 against divisional opponents with both victories coming on the road (Pittsburgh and Baltimore).

Joe Burrow continued to shine from behind center, throwing for a career-high 416 yards, which ranks sixth all-time in Cincinnati history, while also finishing with three touchdowns. Rookie Ja’Marr Chase finished with a career-best 201 receiving yards and one touchdown while the Bengal offense totaled 520 yards against Baltimore’s defense.

The Bengal defense continued to show why they’re one of the best in the NFL, limiting Lamar Jackson to only 257 passing yards while sacking him five times. Sam Hubbard finished with a career-high 2.5 sacks while Larry Ogunjobi totaled 1.5 sacks and Trey Hendrickson recorded a sack.

The Bengals took an early 3-0 after an Evan McPherson 52-yard field goal but Baltimore’s Jason Tucker tied the game at three apiece minutes later after drilling a 45-yard attempt. Burrow got on tack the next possession and hit C.J. Uzomah for the first of his two touchdowns catches to increase Cincinnati’s lead to 10-3. Uzomah finished with three catches, 91 yards and two touchdowns. Baltimore’s Devonte Adams scored on a one-yard run with 1:56 left in the first half to tie the game at 10 apiece.

The Bengals managed to take a 13-10 lead into the locker room at halftime as McPherson connected with a 30-yard field goal attempt.

With the Bengal defense continuing to hold Baltimore’s offense in check, a 21-yard touchdown run by Joe Mixon, and a 46-yard touchdown run by Samaje Perine put the game away in the fourth quarter. Cincinnati will now switch its focus to next Sunday’s road contest against the New York Jets (1-5), who suffered a 54-13 loss to New England on Sunday.

GAME TRACKER:
The Bengals head to the Big Apple to take on the Jets next Sunday, October 31st, with a 1:00 kick.