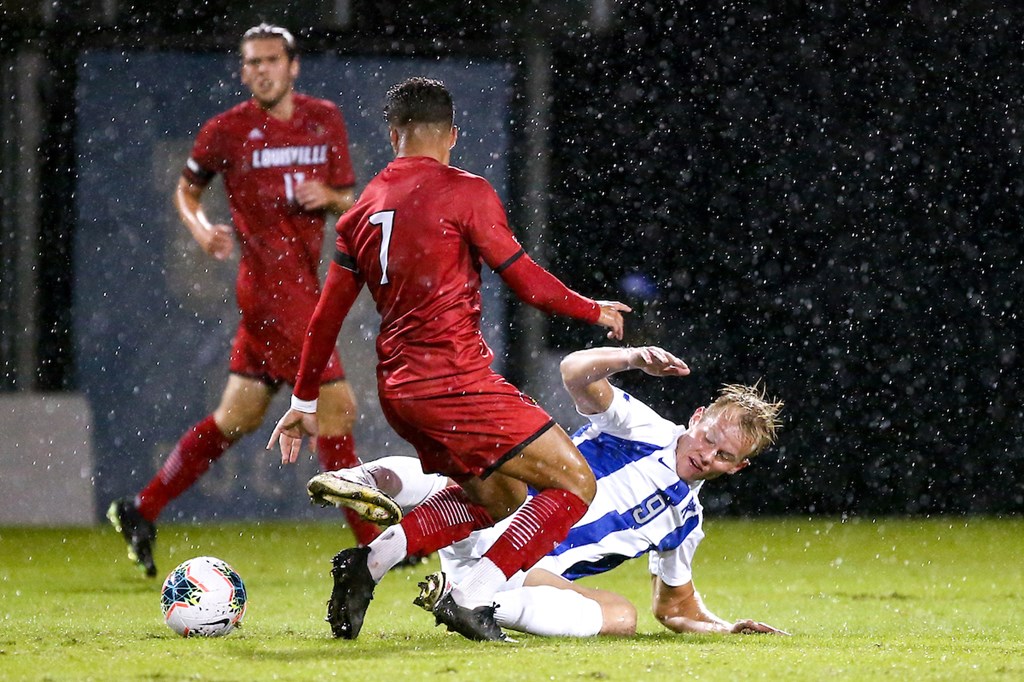 Powered by a two-goal performance from sophomore forward Eythor Bjorgolfsson, Kentucky (2-1) defeated Louisville (0-2) by a score of 3-1 on Monday at Wendell & Vickie Bell Soccer Complex.

The scoring outburst marked the second brace of Bjorgolfsson’s 22-game career, while the win marked the Wildcats’ third straight over the Cardinals in Lexington.

The scoring began in the 27th minute, when a long ball from Aimé Mabika drew Louisville goalkeeper Jake Gelnovatch out to his own 18, where Bjorgolfsson came out ahead in a footrace by poking the ball between Gelnovatch’s legs and finishing off the play in front of an empty net.

The goal was Bjorgolfsson’s first of the season, as well as Mabika’s first assist. Kentucky headed into halftime with a 1-0 lead.

The Cardinals answered back exactly 10 minutes into the second half, however, taking advantage of three consecutive corner kicks in the span of 56 seconds with a header by Bryce LeBel off a service by Louisville native Haji Abdikadir.

Ultimately, the stalemate proved to be short lived. Bjorgolfsson, who led his team in game-winning goals during his 2019 Conference USA All-Freshman campaign, went on to seal the victory in the 62nd minute.

Junior forward Daniel Evans began the sequence by corralling his own rebound from a shot on target high off the hands of Gelnovatch, only to attempt another try that instead landed at the feet of Bjorgolfsson. The 6-foot-2 Norwegian finished the play on the ground with a rocket to the left corner from six yards out.

Mabika padded the Cats’ lead with a successful penalty kick in the 84th minute, improving to 7-for-8 (.875) on his storied career by way of his second goal of the season. Along with fellow defenders Leon Jones, Robert Screen and Luis Grassow, as well as midfielder Bailey Rouse, Mabika did not miss a minute of Monday’s action.

Redshirt-sophomore goalkeeper Ryan Troutman received the first starting nod of his collegiate career, recording two saves and improving his season record between the pipes to 2-0. Fellow Louisville natives and Kentucky midfielders Brandon McManus and Case Cox combined for 24 minutes off the bench in Cox’s career debut.

The Wildcats outshot the Cardinals 17-9 overall and 7-3 on goal.

Kentucky is set to return home for its second match of the week on Friday, hosting Central Arkansas (0-1) at 3 p.m. ET.