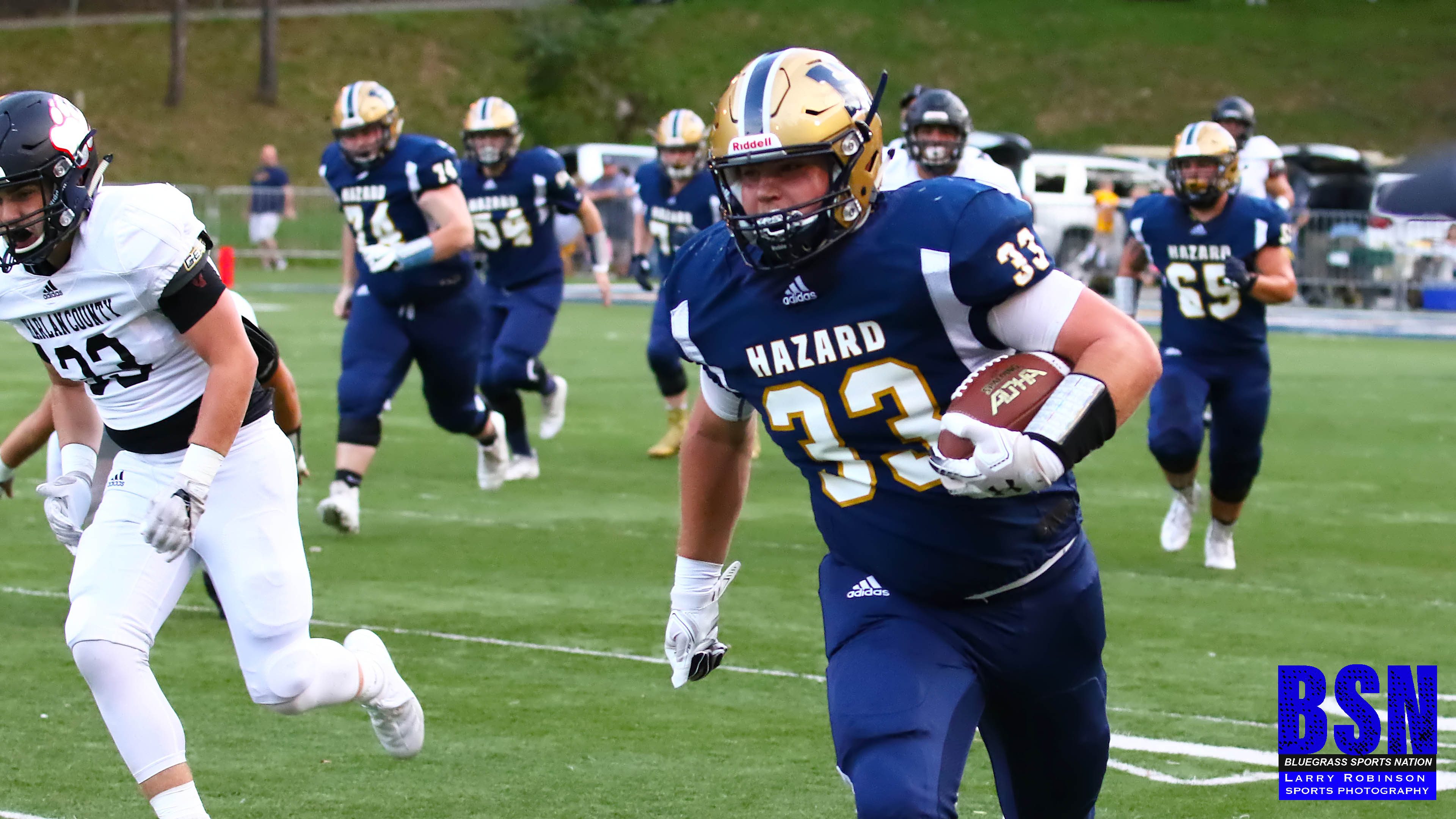 Coming into the game Friday night, head coach Mark Dixon wanted just one thing from his young Bulldogs; to compete. In the preseason, Hazard looked very good at times and mediocre at others. One thing was certain though, on every snap the Bulldogs got better. After a shaky start against a good Leslie team, Hazard chewed up yardage on the ground against the Eagles and moved the ball consistently. When the Dogs visited Shelby Valley there were marked improvements in the air attack and they threw the ball all over the field. In both games, the defense looked solid up front and between tackles. That defense would have to be solid for them to stay in the game with Harlan County.

The game started on a short field for the Black Bears opening drive after they returned the opening kickoff to the Bulldog 25. Harlan then put together an eight play drive and a missed extra point to go up 6-0 early.

After the Black Bear kickoff, the Bulldogs were then able put together a 4 play, 75 yard drive of their own. After a bad exchange on the long snap for the extra point, the game was knotted at 6-6.

The Bulldog defense started to stiffen on the next drive. After having the Black Bears 3rd and long, the young secondary gave up a big play by way of the old “hook and lateral” play. The Black Bears were able to get inside the 10, but in what would be a theme for the night, Hazard was able to turn Harlan County away at the goal line four straight times in what would be the first of two goal line stands and a big stop on a two point conversion for the night.

On the ensuing drive, the Bulldogs would cough up the ball and give it back to Harlan County inside of the 5. It would take four downs, but the Black Bears finally punched the ball in and converted on the two point conversion to go up 14-6.

A muffed kick set the Bulldogs up against a long field starting from their own 15. Despite being plagued with several off-side calls in a row, the Black Bears were able to force the Bulldogs to punt.

After trading possessions, the Bulldogs were able top put together another impressive drive down to the 1/2 yard line. Bad luck hit the Bulldogs again and they fumbled into the end zone where a Harlan County defender was able to recover the ball.

The rest of the first half would quietly come to a close and the teams went to the locker room with Harlan County leading 14-6.

The second half had the ups, downs, and emotions you can usually only find in a playoff atmosphere. Again the kickoff was muffed out of bounds and Hazard would be starting on their own 6 yard line. The Bulldogs then put together an 11 play drive that covered 94 yards. The Bulldogs failed to complete their two point conversion and tie the game after their first attempt was brought back due to a holding penalty. Hazard would kick the ball away still trailing 14-12.

After a long Black Bear drive, the Bulldogs had their backs to the wall yet again, and again Hazard was able to bend and not break and hold Harlan County out of the end zone on 4 plays. Three of those four plays were inside the 1 yard line.

After the Bulldogs were forced to punt, the Black Bears were again awarded great field position after a long punt return set them up inside the Bulldog 25 yard line. Harlan County would not be denied the end zone this time and were able to punch the ball in and go up 20-12. Instead of kicking the extra point and going up two possessions, the Black Bears elected to go for two after the Bulldogs jumped off-sides on two consecutive PATs. That stout Bulldog defense once again bowed it’s neck and held the Black Bears out from the 1/2 yard line and kept the game a one possession affair.

With momentum on their side, the Bulldogs methodically drove the ball down the field, put in the two point conversion, and tied the game with under 4:00 minutes to go in the game.

The Black Bears were again set up in excellent field position after two consecutive illegal procedure penalties were called on the Bulldogs for kicking out of bounds. The defense again came up big when the Bulldogs defender was able to stop the seven play Black Bear drive with an interception on the 1/2 yard line.

With just over a minute to go in the game, the Bulldogs took the snap from their own end zone. In a cruel twist of fate, the Black Bear defense came up big on the goal line this time and was able to stop the Bulldog back in the end zone for the final and winning score of the game by way of a safety.

The Harlan County Black Bears went back across the mountain owning a 2-0 record on the year and the Bulldogs fall to 0-1. After the game, when asked about what he felt about the game, Coach Dixon said, “We competed our butts off. We found out tonight that this group will hit and are physical, I couldn’t be more proud of a group.” Moral victories don’t show up in the win columns, but one thing is for certain, Coach Dixon has some hungry Dogs that are going to win some big games this season.

It’s going to be a fun ride for the Bulldog faithful this year. There will be, as with any inexperienced team, growing pains. If Hazard can get over those in the regular season, they can be a dangerous team come playoffs.

The Bulldogs head to Prestonsburg to meet the Blackcats. Kickoff is set for 7:30 PM.

Bluegrass Sports Nation has weekly coverage of the Bulldogs with a game preview article on Thursday and then Game Recap articles on Saturday each week by JJ Baker and game picture galleries by Larry Robinson!!!

Thanks to People’s Bank of Hazard and Mountain Storage and the Hazard Village Flea Market for sponsoring this week’s coverage of Hazard Football!!!!