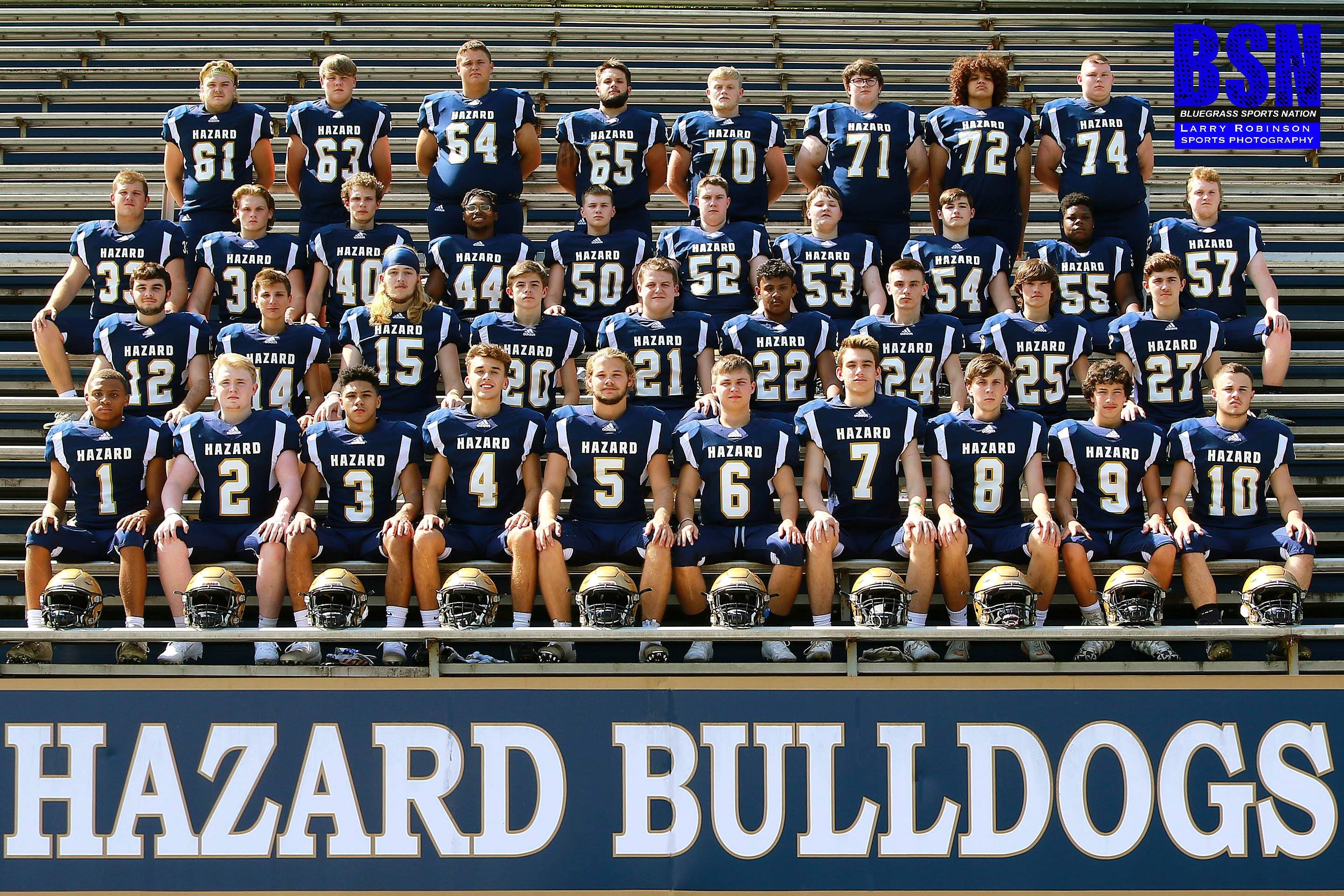 Composer John Addison said, “ You’re either green and growing, or you’re ripe and rotting.” When the Bulldogs started the season there were few teams in 1A that were as green as they were. After being hit hard with graduation, many had written Hazard out of contention for any 1A accolades. What people failed to take into consideration was the Bulldogs were green, not untalented. They also had a great core, albeit small, of returning seniors who had been in some huge games throughout their career. That small core of seniors have rallied the young and inexperienced Bulldogs and have started to show them how to turn that raw talent into something more through hard work and the ability to get just a little better each week.

As you look through the current stat leaders for 1A there is something that jumps out if you’re looking for it. Hazard has only 1 statistical leader (A game changer in Jonah Helm who is leading the state in field goals with 5, and a long of 49yds) and only 1 that holds the number two spot in a category. The rest of the stat sheet has other teams that are dominating a rushing category, or in receiving yards, or passing. Hazard has many players in the top 25 but most fall somewhere between 8-23 in offensive or defensive categories. With that being said, they are sitting at 4-2 with most notable wins over Danville and Paintsville. Their two losses have come at the hands of Somerset (21-9), who may very well hoist the 2A State Title this at Kroger Field this year, and a very physical Harlan County Black Bear (22-20) squad that is sitting at 6-1 and looking to make a 4A regional title run. So how are the Bulldogs winning? The answer to that question is they are winning by whatever means it takes. One player will stand out one week, and then another will step up the following, making it hard to key in on one specific player or aspect of the game.

The Bulldogs have been most solid this year on the defensive side of the ball. That is easy to do when you return your two middle linebackers that are both seniors and are able to call out most shifts, schemes, and defenses without any confusion between them and the coaching staff. Reece Fletcher (#2 in tackles statewide), who has shined since his middle school all-star days, and Mason Collins, who is an absolute tank in the middle of that defense, have been the anchor in a sea of uncertainties. The Bulldogs have had to replace both outside linebackers, four defensive lineman, and two safeties from last years squad. With all that inexperience, Fletcher and Collins have been invaluable to the coaching staff by being “on the field coaches” so far this season. They have had some excellent talent to work with though. The big guys up front have done a great job so far this season of keeping o-lineman off of the linebackers on the run. This thankless job never shows up in the stat sheets, but do show up in the linebacker tackle numbers. Fletcher is currently sitting at number two in 1A in tackles. He has been helped with those guys with their hands in the dirt’s unselfish play. With first year starters at all 4 defensive line positions, a rotation of Matthew Couch (#9 in sacks), Timmy Owsley, Nate Smith, David Cornett, Ian Brashear, and Hootie Thomas (#16 in sacks) has paid off for the Dogs. Not only are they keeping the linebackers feet clear on the run, those lineman are getting pressure on a quarter back on passes nearly every opportunity they get. Outside of the box, the outside linebacker crew of Nick Miller, Zane Deaton (#5 in defensive fumbles forced (3) and recovered (4)), Ryan Davidson, and Keaton Napier have grown each weak. That growth at the outside linebacker position has been fostered by intense competition in practice each day of the week. Finally, the secondary has grown as much as any group on the field. Even their coach, Jerome Blanton, came into this season a first year guy. After playing for Coach Dixon in the 2005 season, he returned this year to the high school after a few years in the 3/4 and 5/6 grade ranks to coach this young secondary. The secondary guys are hard to hide from opposing offenses because many times they are on an island for all to see. So far they have come up big in nearly every game.

Nearly every season in the NFL Draft, the first pick is generally a QB. It is hard to win games without scoring points, and the general on the field, leading the scoring charge, is almost always the quarterback. Hazard lost it’s 3 year starting general to graduation and the heir apparent was Garrett Miller. Miller looked good through the 7 on 7 season and has done nothing short of win midway through this season. He is ranked #8 in passing in 1A and hasn’t had to do anything spectacular other than whatever it’s taken to win. He has some sure handed receivers to throw to in Andrew Ford (#23 in receiving yards), Mason Collins, Campbell Davis, Tyson Turner, and Reece Fletcher. The Bulldogs have also been very effective at running the ball. Lead by Trajon Campbell (#21 in rushing yards) and Reece Fletcher, this Hazard team has been able to run over several opponents so far this season. The big guys up front, Dalton Strong, Matthew Couch, Thomas Massey, Ryan Dean, and Kenton Beverly have been bulldozers at times allowing Bulldog running backs a chance to gobble up big yardage during several crucial drives. The Bulldogs have been just about as balanced as a team could be with 942 yards rushing and 1,008 yards passing. This versatility in the run and the pass has allowed them to keep teams off balance and unable to key in on one specific aspect of their game.

If there is one way to describe this group of Hazard Bulldogs, it has to be blue collar. There aren’t any flashy stars. There isn’t always just one player you can key on. Each and every one of these guys strap up the helmets everyday and simply go to work and get better. If they can continue this “work every week” mentality, Paintsville will not be the only upset these Dogs see this year. They are shaping up to being eerily similar to another Bulldog team that came around in 2016. That team was suppose to be a year away due to immaturity as well. That team went on to give Beechwood all it wanted for four quarters before finally falling to the Tigers, 21-14 in the KHSAA 1A State Title game. Can it happen? Sure. Will it happen? That is squarely on the shoulders of those hard working, blue collar Bulldogs and will depend on if they continue to improve week-in and week-out. They will get their biggest test of the year this coming Friday when the #1 Pikeville Panthers make the trip to Hazard’s Daniel Field. Kickoff is scheduled for 7:30 on October 18. Check in with Bluegrasssportsnation.com throughout the week for all things high school sports and Thursday October 17 for a preview of the Bulldogs and Panthers.