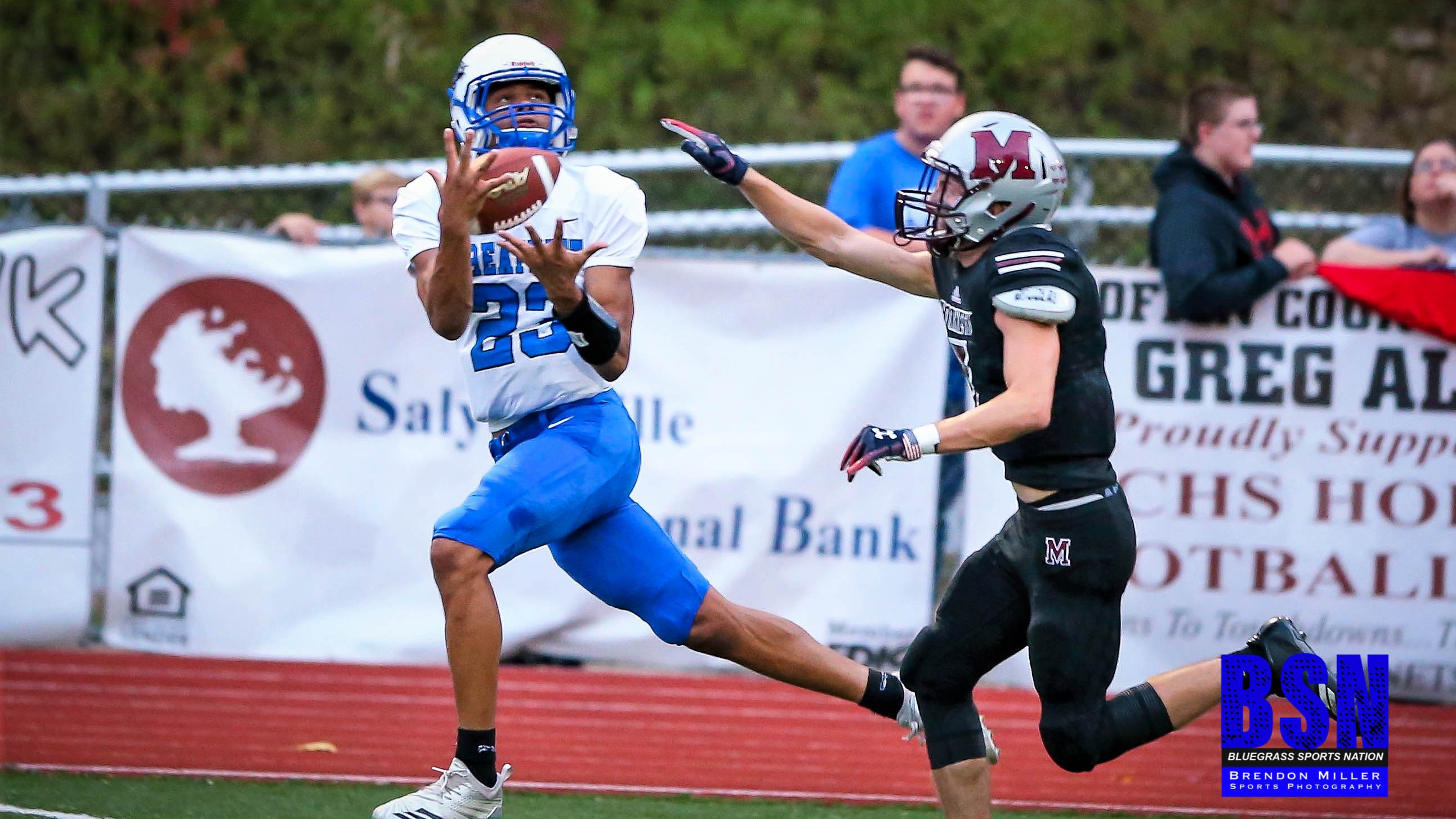 The Breathitt County Bobcats made the short trip to Magoffin County on Friday night. Breathitt 2-0 on the season was looking for their first 3-0 start since 2012 when they went 12-1 losing in the Regional Championship to Belfry. The Hornets of Magoffin County 1-1 were looking for a signature win in the Coach Chis Gamble era.

Coach Gamble’s Hornets won the toss and elected to receive the opening kickoff. Lane Weddle booted the ball deep down field and the kick coverage was excellent for the Bobcats as they swarmed to the ball and pinned the Hornets deep in their own territory. Breathitt County’s defense showed their dominance early forcing Magoffin County to go 3 and out.

After a decent punt return the Bobcats began their first possession on the Hornets 33-yard line. On Breathitt’s first offensive play Charles Collins busted loose for a huge 23-yard gain setting the Bobcats up inside the 10-yard line. Braxton O’Hara got in on the action running for 9 yards on the next two snaps placing the ball on the Magoffin County 1-yard line. Breathitt went under center in the power-I formation and capped the 4 play, 33 yard drive off with a 1-yard plunge from Collins. The extra point try was no good giving Breathitt the lead 6-0 with 8:57 left in the first quarter.

Magoffin County was unable to garner a first down on their next possession and was forced to punt again. Coach Moore opened the playbook and dialed up the O’Hara to Slaughter connection for a 68-yard touchdown pass down the right sideline. It took only one play for the Bobcats to score and after the 2-point conversion, the Bobcats led 14-0 with 7:10 left in the first quarter.

Breathitt’s defense forced another 3 and out forcing Magoffin County to punt. Lane Weddle returned the punt for a touchdown, or so we thought. The touchdown was called back on a holding penalty setting the Bobcats up just outside of Hornet territory. Senior tail back Dalton Manns got in on the action as he busted a long run up the middle for another “First National Bank Touchdown!” Point after try was good and the Bobcats found themselves up 21-0. Lane Weddle added another score putting the Bobcats up 28-0.

Coach Gamble’s Hornets got their first 1st down of the game in the second quarter. Magoffin County used that momentum to forge their way into the endzone preventing a running clock. After failing to convert the 2 point try, Magoffin trailed 34-6.

Breathitt’s offense proved just how explosive they are on the ensuing drive. With only 2 seconds left in the half, Breathitt’s Charles Collins would sprint 71-yards to the endzone as time expired on the first half. Weddle’s extra point was good making the score Breathitt County 41, Magoffin County 6.  Breathitt added two more scores in the second half. Braxton O’Hara connected with Lane Weddle for his second touchdown pass of the game and Ledaniel Whitaker punched one in on the ground. Breathitt finished the night with 323 yards rushing on 30 attempts for an average of 10.7 yards a carry. The Bobcats were 6 of 14 for 112 yards and 2 touchdowns through the air. Offensively, Breathitt had 435 yards of offense.

Charles Collins ended the first half with 6 rushing attempts for 150 yards averaging 23 yards per rush. Three of his carries went for touchdowns. As impressive of a stat line as this is, Breathitt’s defense only allowed 2 first downs in the first half. Both of which came on Magoffin’s scoring drive. The Bobcat defense was stingy only allowing 45 yards of total offense.  Magoffin County score in the first half marks the only points that Breathitt’s starting defense has allowed through three games. The Bobcats as a team have only allowed 22 points on the season.

The Bobcats will return home to the RiverBank as they host the Estill County Engineers next week. Estill County is coming off a hard-fought loss to Letcher Central 40-36. This rivalry game promises to be a real test for the Bobcats. Look for a column by Fletcher Long previewing the matchup with the Engineers this week!!

As always, if you can’t make it to the game, you can tune in to Bluegrass Sports Nation’s LIVE Webcast starting at 7:15, on the BSN Facebook Page. We also encourage our audience to check us out on twitter @bgsportsnation. Our coverage always incluldes pre-game interviews with both coaches, social media updates, and a post-game interview with Coach Moore. See you on the RiverBank!