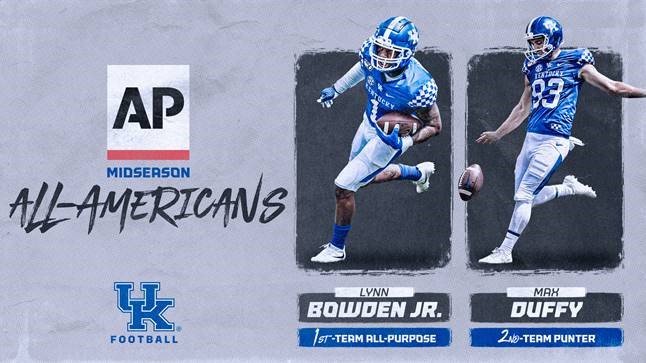 Bowden earned first-team honors as an all-purpose player, while Duffy was named to the second team as a punter

LEXINGTON, Ky. – Kentucky juniors Lynn Bowden Jr. and Max Duffy have been named midseason All-Americans by The Associated Press. Bowden was named to the first team as an all-purpose player, while Duffy earned second-team honors as a punter.

Bowden, a native of Youngstown, Ohio, currently leads the Southeastern Conference and ranks sixth nationally in all-purpose yards, averaging 149.33 per game. He has earned several honors this week after his thrilling performance vs. Arkansas on Saturday, including All-SEC Co-Offensive Player of the Week, Paul Hornung Honor Roll and a Manning Award “Star of the Week.” Bowden accounted for 274 yards of total offense and all three touchdowns in his first collegiate start as a quarterback. He connected on 7 of 11 passes for 78 yards and his first career scoring pass, and also rushed a career-high 24 times for 196 yards and two touchdowns, including the game-winning 24-yard touchdown scamper in the fourth quarter.

His 196 rushing yards were the most for a Wildcat against an SEC foe in 14 years. It was the second-most rushing yards for a Kentucky quarterback in school history.

Bowden is UK’s leading receiver with 30 catches for 348 yards and one TD this season. He currently ranks 13th on UK’s career receptions list and is 18th on the career receiving yards list with 1,303 yards. He also leads the team in kick returns with eight for 200 yards (25.0) and punt returns with four for 53 yards (13.2).

Duffy, a junior from Perth, Australia, leads the nation in punting at the midway point of the season with a 50.4-yard average per kick. He has been consistently dominant and earned Ray Guy Award Punter of the Week for week five vs. South Carolina when he broke his own single-game record (min. eight punts) by averaging 51.1 yards on nine kicks. He also became Kentucky’s career punting average leader. Duffy, who was a Ray’s 8 nominee in week two as well, currently is averaging 46.5 yards on 86 career punts.