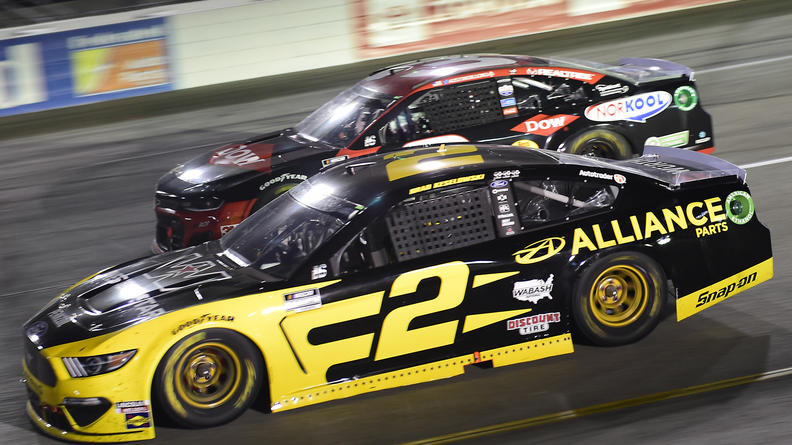 Brad Keselowski leads the final 48 circuits conveniently collecting his 4th win of the 2020 Season at Richmond.

Kyle Busch along with Christopher Bell started the race from the rear of the field after the No. 18 JGR Toyota failed pre-race inspection twice and an unapproved adjustment for the Rookie’s No. 95 Toyota.

NASCAR displayed a competition caution on Lap 31 allowing teams to measure tire wear.  Every lead-lap cars would pit as Austin Dillion is off pit role first for the lead after service.

Austin Dillion would forfeit the lead to Deny Hamlin as he powers pass the Childres Chevy on lap 40.

Hamlin held off a late challenge from Dillion to secure his eight Stage victory of the season and valuable playoff points.

After Stage 1 completion,  lead lap cars pit for service, Hamlin’s precise pits service award his JGR Toyota first off pit lane.  Unfortune for Denny Hamlin and Austin Dillon as both were caught speeding on pit road and penalized to the rear of field.

With 130 laps remaining in Stage 2 race leaders Dillon and Keselowski remain back in the pack 20th and 24th respectfully.

On Lap 182, Austin Dillon drives past Kevin Harvick to reclaim the lead as Brad Keselowski makes his showing at third.

Mid-point of the final Stage, Joey Logano pits early on a green-flag pit stop and circulated to the lead on lap 308.

Only 50 Laps remaining Kurt Busch gambles with a one-stop strategy for track position.

Brad Keselowski clinched a bid to the Championship Round of 12, joining Kevin Harvick and Denny Hamlin as drivers who have secured a bid before the final race of the Round of 16. The final cut for the Round 1 playoff contenders will be determined next weekend at Bristol.