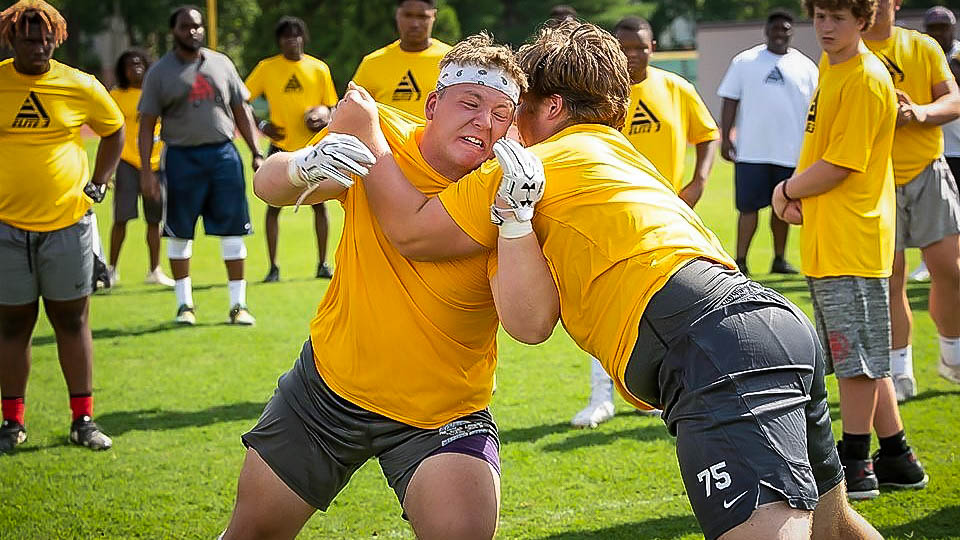 2019 promises to be an exciting year in Jackson as Mike Holcomb Athletic Complex, a.k.a the RiverBank, will be definitely be hopping this Fall. News broke at the end of June that Charles Andrew Collins, youngest of the famed Collins Brothers, was coming home to Breathitt to play his Senior season for the Bobcats. Collins added to returning District Player of the Year, Braxton O’Hara at quarterback along with running back Dalton Manns, and fellow newcomers Lane Weddle and Ethan Gibson, and a host of talent at the skilled positions, has anticipation at a fever pitch as the Bobcats prepare to open practice later this evening.

Turns out the Bobcats were not done attracting talent during the summer. On May 28th, BSN did a feature on 2021 lineman William Long of Hopkinsville and his tremendous recruiting combine exploits. Little did we at BSN know that a few doors would be opened and William would be playing for BHS this Fall. Click link for May 28th Story on William. http://bluegrasssportsnation.com/william-long-class-of-2021-kentucky-high-school-footballs-tank/

William, along with his parents, Fletcher and Bebe, sister Caroline, and younger brother Jack relocated to Jackson last week and the Long children enrolled in Breathitt Schools on Monday.

In our May article, we dubbed William The Tank. What else could you call a young man who is just heading into his Junior year and already bench presses 405 pounds, squats 600, power-cleans 260, runs the 40 in 5.18-seconds and has a 30 inch vertical jump. May have to adjust that as Tanks are slow, but this Tank is definitely not.

Watching film on William revels an exceptional athlete who is technically skilled on both the offensive and defensive side of the ball. William has two years of starting experience on both sides of the ball and has the potential to be a dominating force for the Bobcats in Class 2A.

William is already known across the Commonwealth for his performance since being a day one varsity starter at Hopkinsville High. William’s list of honors during his freshman and sophomore seasons is extensive: APs All-State Football First Team in 2018; freshman and sophomore All-State by KPG Football; winner of two consecutive Kentucky Power lifting Championships; National Undergraduate Combine’s All-American team; Blue-Grey All-American Super-Regional; tabbed the 8th best defensive lineman in this year’s Appalachia Prep Combine in White Sulphur Springs, West Virginia; and listed as the 14th best offensive lineman in Kentucky, regardless of graduating class, entering the 2019 season by Bluegrass Rivals.

Despite his imposing build and abilities, talking with William yields a young man of few words who is very cordial and well-mannered. When asked about his move to Jackson William replied “I am thrilled my family has moved to Breathitt County and we have been made to feel very welcome and right at home here in the mountains.” “I was very happy playing for my previous team and was looking forward to returning. However, my mother and father and siblings sat down as a family and made the decision to strike out for Jackson, Kentucky. We are very happy to be here.”  William concluded “Breathitt has a rich history of success with three KHSAA State Championships, and I look forward to helping us bring home a few more.”

When asked about the prospect of William suiting up for the Bobcats, BHS Head Coach Kyle Moore told BSN, “We are very happy to add the Longs to our Bobcat family.  I am excited for the opportunity to coach William.  He is a very talented player and will fit in well with our players and scheme.“

So, there you have it folks. The Bobcat has been on the road back to prominence beginning with last year’s 8-4 District Championship team. With all the developments around the Bobcat team, with several returning play makers, the new editions both coming up from middle school and coming in from other parts of Kentucky, has resulted in a Bobcat roster which has every appearance of being one which will compete, and compete very well, against the schedule on tap for this upcoming Fall.

Football season is coming fast upon us. We hope you’re excited, we know we are here at BSN. Should be an exciting year on the Riverbank and we look forward to bringing you our coverage of the Bobcats this year.