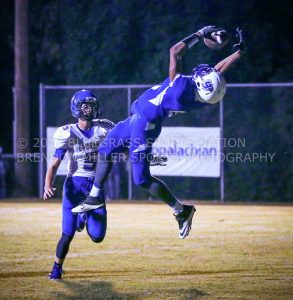 Tonight’s game of the week featured two undefeated teams, competing in Class 3A District seven.   The Morgan County Cougars traveled to Jackson, KY to take on the Breathitt County Bobcats.  The game tonight is a district rivalry, and the winner of tonight’s game will go a long way in determining the district Champion of KHSAA Football Class 3A District seven.  Morgan County entered tonight’s game with a .500 record consisting of three wins and three losses.  Morgan County opened the season with a 36- 54 loss to Rowan County in Week one.  Morgan County Dominated the Jenkins Cavaliers 60-0 in Jenkins during week two.  The next two weeks Morgan was soundly defeated by Mason County, and Shelby Valley.  Entering District play Morgan County has played their best football of the year, and is currently on a two- game winning streak entering Tonight’s matchup with the Breathitt County Bobcats.  Breathitt County struggled earlier this year losing five straight games.  When the Feeder program of Grade School Football was cut a couple years ago from the athletic program, developing team has Chemistry has proven to be a challenge to the Bobcats. The Last two weeks of the season Breathitt County has played their best Football of the season, and is also on a current two- game winning streak.  Breathitt County defeated Knott County Central Patriots on the road in week six with a 50-43 victory.  Last week Breathitt played at home defeating the Estill County Engineers 36-22.

Colton Ritchie and family honored during Half- time.

Heroes and inspiration comes in all shapes, sizes, and ages.  Colton Ritchie, who is the six -year old son of Josh and Shannon Ritchie was honored at halftime during the game tonight.  Colton Was joined on the field with Twin Brother Jaiden Ritchie.  Colton has become an inspiration to everyone in the Breathitt County area, as he has bravely battled (DIPG) Diffuse Intrinsic Pontine Glioma, commonly known as a form of brain Cancer for over a year.  The kid has been through more at a young age, than some people ever will.  Through it all Colton has been brave, continuing to fight the Life- Threatening Disease.  Colton has inspired the “Team Colton” t- shirts as people in the County and across the country show their support and encouragement.  To help pay for his family expenses travelling back and forth to Cincinnati, Ohio Several Fundraisers have been held including a Disney character Princess Ball, and recently had a super hero ball with his family and friends dressed up as their favorite Super heroes or villains.  Although, he suffers a great deal of pain and is pushed by his parents in a wheel chair, he is always seen with a big smile on his face.  The type of Smile that can light up a room!  Yellow and white Balloons were released into the sky, and the moment was surreal for everyone attending the game.  Fans, players, media, and anyone attending the game all applauded Colton and his family. The Balloons are a sign of Pediatric Cancer survivors.  The Ritchie family were honorary game captains and once the Bobcats took the field, joined the family at the fifty -yard line. Colton was escorted via a golf cart, along with his family and mascot riding on the back.

Third Quarter- After the emotional halftime moment, the game resumed.  Breathitt County received the ball to start the second half. On The opening kickoff, the fans witnessed one of the most exciting plays in all of Football a kickoff return for a TD. #11 Trey Noble received the ball at the Breathitt County twenty- four yard- line.  Noble mishandled the ball, before running.  Once Trey Noble Got the ball in his hands firmly, he makes a move making several Cougars Defenders miss with open field to run.  Seventy- Six yards later Noble scored crossed the pylon giving the Bobcats the score.  Breathitt County increased the lead with the score BHS 42- MCHS 14, 11:47 remained in the third quarter.  The Bobcats found the end zone one more time in the quarter as QB Stacy rushed the ball for a one- yard TD with 6:04 remaining in the third Quarter. BHS led 48- 14.  Morgan County kept playing and never gave up, but the Cougars become turnover prone again with two more Fumbles recovered by Breathitt County. 5:45 #11 Trey Noble recovered the ball and 4:03 remaining in the quarter Morgan Turned the ball over again.  Tyler Patrick #44 Recovered the ball at the Breathitt County forty- two yard line.  Viewing the game from the booth and setting near WJSN Radio host Steven Neace, I was informed of an interesting stat.  Morgan County had fumbled the ball six times, losing the ball five times and Breathitt Scoring four times on the turnovers.  The Quarter concluded with the score Breathitt 48- Morgan 14.

Breathitt County Improves on the season with a record of three wins and five loses.  All of the Breathitt County Victories have come in district play being 3 and 0 in Class 3A, District 7 Football.  Breathitt County will play next Friday against Powell County who is also undefeated in district play.  The game next week will be a deciding game on crowing the District Champion.  Being a district Champion guarantees the School to host at least one game of the Playoffs if not two, depending on if the team is able to get past week one.  Morgan County drops on the season with a record of three wins and four loses.  Morgan County has a record of two wins and one loss in district play.  The Cougars will travel to Knott County Central next Friday to play another District seven rival.  Good luck to both teams, for the remainder of the season and it has been a pleasure covering your teams.  Bluegrass Sports Nation will continue our game of the week coverage next Friday, the game is yet to be announced.  Stay tuned as Brendon Miller will do a video announcing the game.