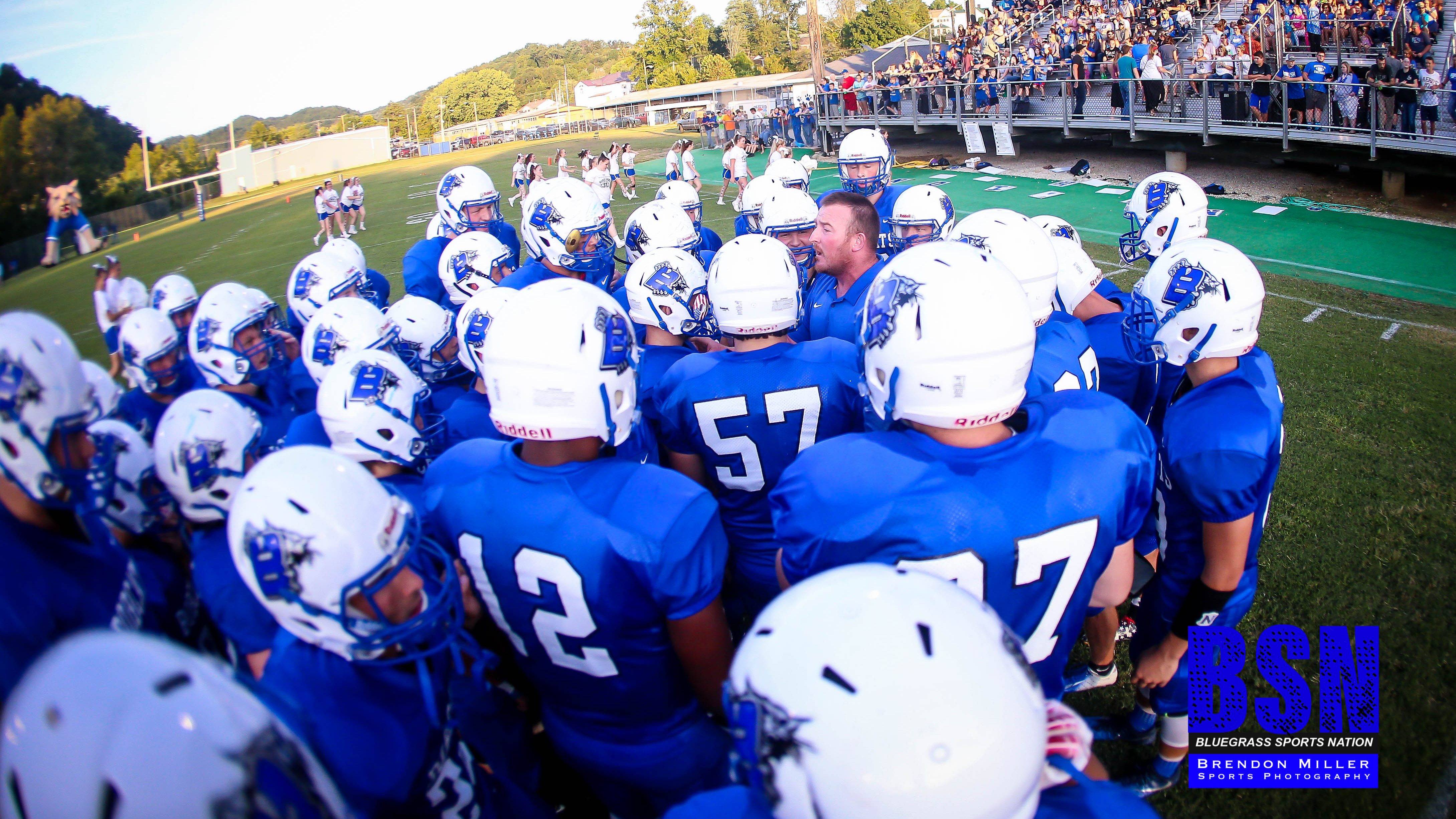 Looking back at Magoffin then ahead to Estill County

This week we will look back at the big road victory over Magoffin County then ahead to the problems Estill County will bring to Jackson, Kentucky when the Bobcats host them Friday night.

A look back at Magoffin…

The Bobcat defense has just been stifling and the offense has been right potent too, particularly in regards to the ground game. The “Big Blue Wave” did its thing again last Friday night as the Bobcats rushed it from scrimmage 30 times and gained 323 yards with 6 rushing TDs. Anytime a football team can average over 10-yards per attempt and carry six footballs across the goal line for six points, the O-Line has played pretty well somewhere in the equation.

Charles Andrew Collins is finding his stride as the senior gained 150-yards on only 6 carries with 3 of our six rushing TDs. Dalton Manns gained 57 yards in 4 carries, LaDaniel Whitaker gained 55 yards in 7 carries with both Manns and Whitaker finding pay-dirt too.

The passing game hooked up a few times on some nice plays as we saw O’Hara to Slaughter work to perfection for 58-yards and a passing TD early in the game. O’Hara to Weddle, a little later, on a perfectly thrown “back-shoulder” fade to the corner of the end zone was perfectly thrown and high-pointed beautifully by Weddle for a score.

The defense allowed only 2 first downs on the night. Magoffin gained 26 yards from scrimmage on 22 attempts, threw for 19-yards on 4 for 16 passing with two picks, and managed only 45 yards of total offense in 38 plays. Defensively, Breathitt was led in total tackles by Caden Hogg and William Long, each with 7, and Tim Spencer threw in 6 total hits himself. Both Lane Weddle and LaDaniel Whitaker led the team with solo tackles with 4 a piece. Weddle and Long forced three fumbles, with Ethan Gibson recovering one, and Jacob Noble and Blake Ritchie both had interceptions.

Like we said, it was a dominating performance in all three phases of the game (offense, defense, special teams) and that is how one wins games on the road 55-6. We want to mention Lane Weddle. Weddle was big in the passing game with a TD reception, ran one in for a score, had 4 solo tackles with 2 assists, and was “surgical” with his directional kicks keeping the Hornets bottled up deep in its own territory for much of the night. It is amazing all the ways he contributes to this football team. We should probably mention he has converted 9 PATs in three games to go along with everything else he does in addition to punting, which he also does well.

A look ahead to Estill County

Let us assure you of this, Estill County is far from a pushover. Breathitt may have beaten them in 2018 down there, 40-22, but every year is different. If the Bobcats take this team lightly they could end up getting embarrassed. The Bobcats need to prepare like this is the Regional Championship every week, but especially this week.

Estill County is a Class 3A, 5th district team which is 1-1 on the year. Estill has scored 72 points in two games and allowed 54. They have rushed for 577 yards and passed for 107.

Ty Niece is the QB (No. 6) and he is 9 for 20 for 93 yards and 1 TD, I interception so far. The only other pass was thrown by Justin Stamper (No. 21) and was completed for a gain of 14 yards. Since Stamper is also the team’s second leading rusher, it would pay to be mindful of some trick-a-ration, so to speak; some sort of pass out of the backfield as they have shown the ability to do that.

Micah Swim (14), Ethan Webb (No. 9), and Coben Clem (10) have caught 7 of team’s 10 receptions through 2 games. Should Estill look to throw the football, something they have shown a reticence to do, they will throw it to one of these three.

Ty Niece (there is that name again) is the leading scorer, having accounted for 24 of the team’s 72 points. Short has scored 18, and Micah Swim has scored 12. What is nice about this is the production is sufficiently concentrated toward a handful of offensive players giving a defense little question regarding who will get the football.

On the back end, both Short and Webb have interceptions with Ethan Webb (No. 9) having the team’s lone pick-six. Basically, this team has shown the same propensity to run the football as Breathitt, they have the same type dynamic at QB regarding the ability to beat you with his feet like Braxton O’Hara.

Breathitt is 3-0 for the first time since finishing 12-1 in 2012 and losing to Belfry (ugh) in the regional championship game back then. This is a team Breathitt certainly can beat and, maybe, should beat; but also a team we better come ready to play.

Much like Middlesboro (who is rolling so far this year at 2-1) and a tough Pike County Central squad which narrowly lost to Shelby Valley in this year’s Pike County Bowl 12-7, this Engineer team could pose some problems. If Breathitt takes care of the football and plays sound, assignment defense, the Bobcats we will be 4-0 when the night is through.

Remember: Bluegrass Sports Nation will stream the game live on the BSN Facebook Page with play by play by yours truly and color by Bobcat great Casey Allen!!!