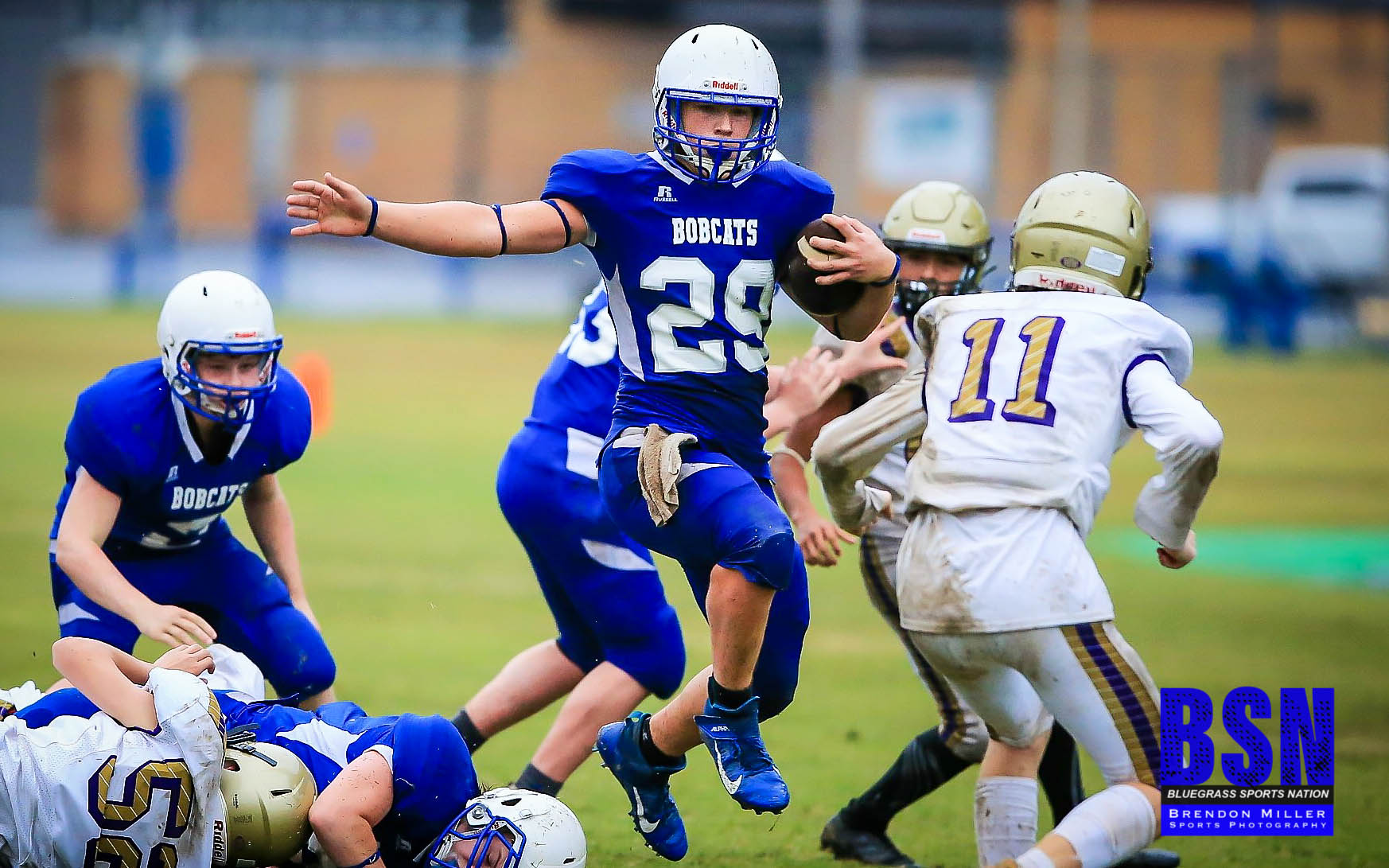 Breathitt Middle put its undefeated season on the line on Saturday evening as Meece Middle made the trip from Somerset to the Riverbank. Breathitt was originally scheduled to take on Harlan County in Barbourville, but that game as cancelled due to COVID, and Coach Shorty Combs was able to schedule this game during the week.

Meece was a Semi-Finalist last season in the Kentucky Middle School Football Association playoffs and a program with great tradition, so this was a great Middle School matchup all around.

Breathitt controlled the line of scrimmage on both sides of the ball and ran the ball with authority all day with the four-headed attack of Kory Combs, Jayden Gibson, Jason Tolson and Brayden Johnson. Quarterback Aaron David Johnson was 3 for 3 passing for 39 yards and 1 touchdown. Breathitt’s offensive line (left to right) of Ty Clemons, Sawyer Hall, Carson Miller, Waylon Abner, and Chris Neace continually opened holes and moved the line of scrimmage forward. Breathitt ran 41 plays and had 13 first downs on the day. Breathitt had drives of eight, 10 and 15 plays. The only drive which stalled was hampered by penalties which nullified big runs. Breathitt possessed the ball for 15:06 of the 16:00 of the 2nd half.

The Bobcat defense was stellar holding Meece to one score, three first downs, and a total of 21 plays on the day.

GAME RECAP
1st Quarter
Meece received the opening kickoff on their own 36, but went three and out and punted. Breathitt took the ball at their own 28 and picked up a first down on the first play, but then an illegal hands to face on a Jason Tolson’s long run down inside the 20, and then a hold forced the Bobcats back into their side of the field and eventually to punt. Meece took the ball on their 22 and picked their initial first down on two runs by #17, but then the Briar Jumpers were stopped on third down to end the 1st Quarter.
2nd Quarter
Meece punted on the first play of the quarter, with Breathitt taking over on their own 28. Breathitt marched the ball down the field on eight consecutive runs, picking up four first downs. Kory Combs took the hand off at the four and powered off left tackle to put the Bobcats on the board. Combs then ran in the conversion from the Wildcat formation to put the Bobcats up 8-0 with 4:00 to go in the half. Meece returned the ensuing kickoff to the 32. Meece again picked up a first down, but then was forced into a fourth and 11 from their 49 yard line where the threw up a prayer that was intercepted by Brayden Johnson at the eight yard line. An illegal procedure penalty on Breathitt backed the ball back to the three. Meece came up with a tackle for loss on first down and then no gain on second. On third, Meece brought the house and Jayden Gibson was tackled in the endzone for a safety, with 33.5 on the clock. Breathitt free kicked with Meece taking over at the Breathitt 38. Meece was stopped on first down for no gain and then a completion on 2nd down was called back for holding. Meece was again again called for holding on 3rd down and the half ended with Breathitt leading 8-2.
3rd Quarter
Breathitt took the 2nd half kickoff on their own 40 and went on a 10 play drive that took 7:23 off the clock. Aaron David Johnson hit Brayden Johnson on third down from the 14 for a diving touchdown to put the Bobcats up 14-2. Breathitt overcame a holding penalty during the drive and coverted a huge 4th and 8 with Johnson & Johnson connecting again for the 1st down. The coversion pass by Kory Combs was in complete, and with :37 left in the quarter, Breathitt led 14-2. Meece received the kickoff and were called for holding and took the ball at the their 35. Meece picked up a first down on their first play on a run by #28, and after their 2nd play, the quarter ended.
4th Quarter
Meece began the 4th with a bang as on 3rd and 9, #7 went deep to #11 and connected on a 51 yard catch and run, for their only trip to the endzone of the day. The conversion was no good, and BMS lead 14-8 with 7:43 left on the clock. That would be last time Meece would possess the ball. Breathitt took the kickoff at their own 19 and ground out the clock on 15 plays to close out the game. The Bobcats had to overcome a holding penalty on a run by Combs to inside the 5 during the drive. Johnson hit Combs on a swing pass on 4th and 7 from the 19 with :47 on the clock and Combs broke two tackles to pick up 16 and give the Bobcats a first down. The Bobcats took a knee in the victory formation for the win.

UP NEXT
Breathitt is now 4-0 on the season and is scheduled to host Johnson Central on Thursday Night at Mike Holcomb Athletic Complex.