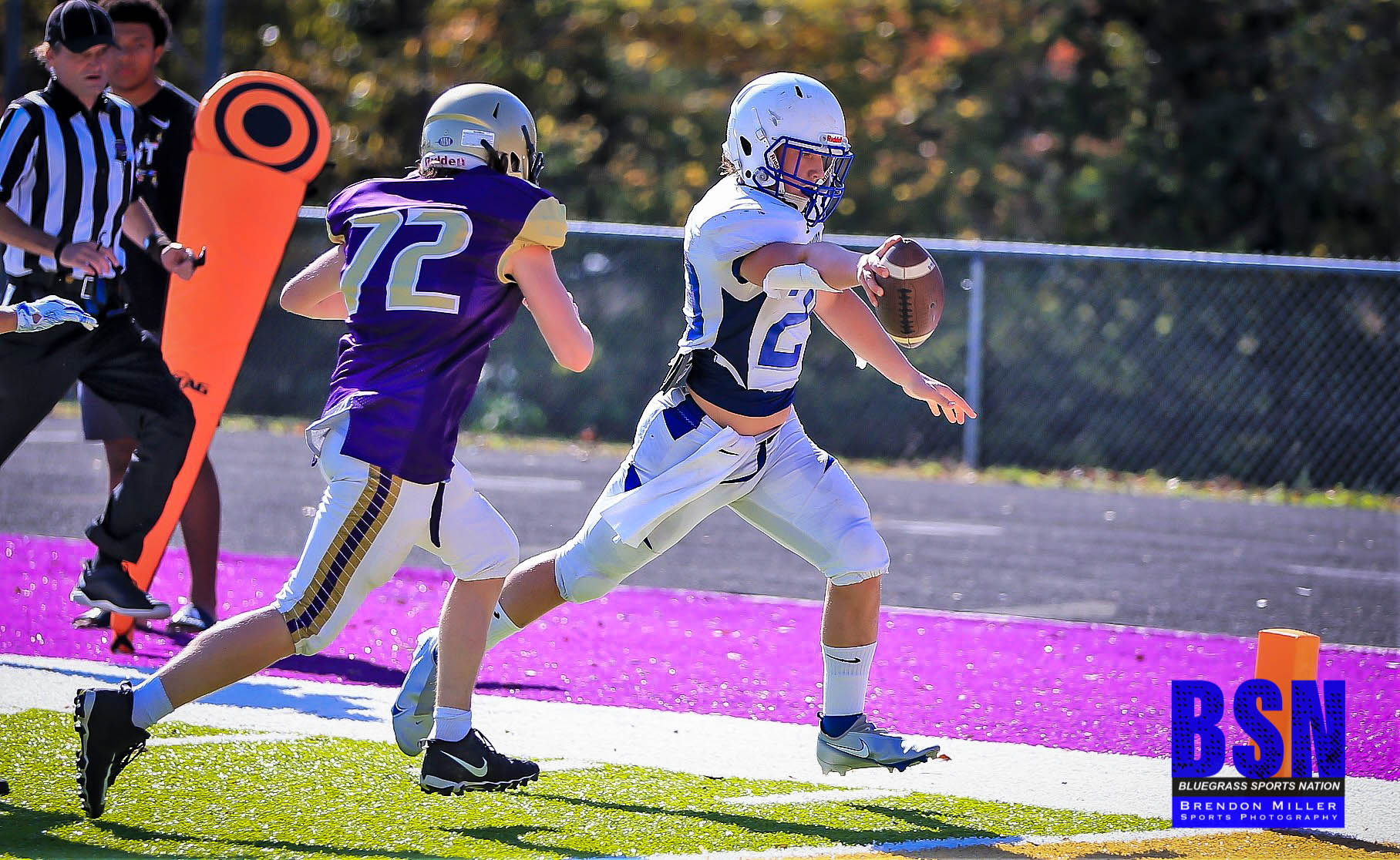 Bobcats come from behind to defeat Meece 16-12

Breathitt Middle School and Meece faced off at high noon on Saturday for the Kentucky Middle School Football Association Region 2 title on a beautiful Fall day in Somerset. This was a rematch of a game on October 10th in Jackson in which Breathitt defeated Meece 14-8 in a game that was not as close as the score.

The noon start was not kind to the Bobcats as they were forced to leave Jackson at 8:00 am for the two and a half hour trip to Somerset. This game was originally slated to be played at North Laurel in London, but was moved to Somerset due to the shutdown of the Laurel facilities due to COVID.

Apparently the young Bobcats felt the effects of the early morning and the bus ride as they came out totally flat and had, to say the least, a shaky beginning to the game. Meece jumped on the Bobcats from the gun. The Jumpers received the kickoff and on their first offensive snap, back Austin Morales went off tackle and sprinted untouched 58 yards down the right sideline to the endzone. On the Bobcat first offensive snap, the snap was dropped and then on the second offensive snap Kory Combs uncharacteristically fumbled and the Jumpers took over on the Bobcat 44. After a defensive stand, Breathitt got the ball back and on their third offensive play of the series Meece’s Josh Bruner picked off a screen pass and raced 46 yards to the endzone to put the Jumpers up 12-0 less than nine minutes into the game.

The Bobcats had been punched in the mouth, and the question on the mind of all in attendance or watch on the BSN Live Stream was, “How would they respond?” The response was emphatic. The Bobcats simply went to work. On their first play after receiving the kickoff, Combs went off off right tackle behind the pull and block of Waylon Abner to rumble 44 yards down to the Meece 15. With a horse collar penalty on the tackle, the ball was spotted at the 7. Two plays later, Combs punched it in from the 2, trucking a Meece linebacker enroute to the score. Combs powered in the conversion, and the Bobcats has taken the momentum and control of the game.

The Bobcats dominated the rest of the day. Meece only picked up one first down the rest of the game on four possessions. Combs punched in the game winning touchdown and coversion in the second half for the margin of victory, and the Bobcats were forced to punt only once.

The character of this great group of young Bobcats took over after that first nine minutes and they simply controlled the rest of the game. Some untimely penalties and poor execution on the last play of the first half were the only blemishes that held the score in check. Champions have C-H-A-R-A-C-T-E-R and these CATS are full of it. Cool as they can be, simply no worries, just execution, and they did that. Coach Shorty Combs reinterates to his players to simply do what the coaching staffs coaches them to do, and they did.

The Defense gave up one play on the day, and it just happend to be the first play of the game. The offense was and is so exceptional. I have continually praised the offensive line this season and for good reason. When the defense puts 9 and 10 men in the box to stop the run and dare you to throw the ball, and Neace, Abner, Miller, Hall and Clemons, along with Jayden Gibson and Jason Tolson in the back field, still open holes for Combs to pick up positive yardage, that is all that needs to be said.

These Cool CATS are headed to the Semi-Finals!

GAME RECAP
FIRST HALF
MEECE – Meece received the opening kickoff at their own 42. Austin Morales took the handoff on the first snap and raced 58 yards for the touchdown. PAT was short. Meece 6 – BMS 0.
BMS – Breathitt’s Alex Strong received the kickoff at the 18 and returned it to the 37. On the second play of the drive, Kory Combs fumbled and Meece recovered at the Breathitt 44.
MEECE – Ran nine plays inside Breathitt territory picking up two first downs, one on a penalty on Breathitt for off sides on 4th down. A big joint sack by Jason Tolson, Salyer Hall and Waylon Abner forced the Jumpers to punt. A bad snap on the punt resulted in BMS stopping Morales and taking over on their 42.
BMS – On the third play of the drive, Breathitt tried a screen pass to Kory Combs, but Aaron David Johnson’s pass was intercepted by Josh Bruner and returned for a touchdown. The conversion run was stuffed and Meece led 12-0.
BMS – Strong received the kick at the 19 and returned it to the 41. That is where Breathitt went to work. On the first play, Combs took the handoff and sprinted down the right sideline 44 yards to the Meece 15. An added penalty for a horse collar tackle put the ball on the 7. Combs up the middle ran to the 2 and then trucked the Meece linebacker that met him in the hole for the score. Combs ran in the conversion to make it Meece 12 – BMS. 8
MEECE – Meece received the kickoff at their 40. Breathitt forced a three and out and Meece attempted to punt, but a bad snap and then kick of the ball on the ground gave the ball to the Bobcats at the Meece 49.
BMS – Breathitt ran six plays picking up a first down, but turned the ball over on downs to Meece on the 24.
MEECE – Bobcat defense forced a three and out and punt.
BMS – Brayden Johnson received the punt at the 48 and returned it to the 41. Breathitt ran nine plays and picked up three first downs and drove the ball down to the 5 yard line with 3 seconds on the clock. A miscommunicaton on the last play of the half ended the half.

SECOND HALF
BMS – Strong returned the kickoff from the 21 to the 40. Brayden Johnson picked up the first two first downs on a reverse for 11 yards and a screen from Aaron David Johnson for 12 yards. Putting the Bobcats at the Meece 28. Combs picked a third first down to put the ball on the 16. From there Combs rumbled the 16 yards on the 6th play of the drive to pay dirt. Combs punched in the conversion to put Breathitt up for the first time in the game 16-12.
MEECE – Meece took the kickoff at the 38. A hold on Meece and pass interference on Breathitt left Meece with a third and 8 on which Bruner was sacked on a roll out. Meece punted and a block in the back on Breathitt put the ball on the Breathitt 29.
BMS – The Bobcats ran 6 plays and picked up a first down, but were hampered by an illegal motion penalty and a dropped snap and were forced to punt.
MEECE – Lewis returned the ball from the 40 to the 47. The Jumpers picked up a first down on a pass from Bruner to Lewis and a horse collar penalty to put the ball at the 25. Combs had a big tackle for loss of 5 on first down, Meece had two false starts, and turned the ball over on downs at the 38.
BMS – Breathitt drove the ball down inside Meece territory picking up two first downs to close out the game.

NEXT
Breathitt will now take on Greenup County in the Division 3 State Semi-Finals next Saturday at Franklin County. Time will be determined.