Breathitt Runs to Victory Over Powell 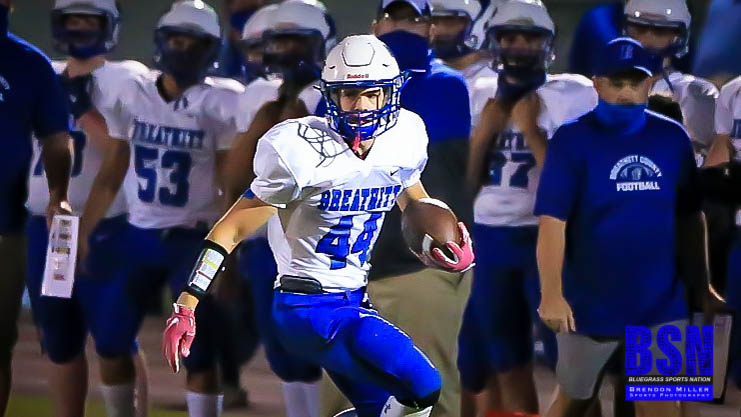 The Bobcats made the trip down the Detoured Mountain Parkway on Friday Night to face the Pirates. Breathitt’s Middle School Bobcats picked up a win in Stanton on Wednesday and the Senior Bobcats hoped to do the same. The explosive offense of Breathitt County, led by Junior Quarterback, Jaylen Turner, didn’t disappoint, putting up 50 points, and 410 total yards on the night in route to a running clock 50-8 win.

Breathitt looked rested, and more disciplined than in their opener at Estill County. The Bobcat offense struck early and often, scoring both of their first two offensive plays, and Coach Kyle Moore put an impressive defensive combination on the field to slow down the Double wing T offense of Powell County.

Lane Weddle was the star of stars on the night, as he exhibited his dynamic playmaking skills, and showed that he can pack whatever load that his team needs him to with unselfish play in the kicking game, the running game, and on defense.  After falling and cutting his head in prgame (forcing him to change to jersey #44 from his normal #19) Weddle scored four touchdowns on the night and scored 30 of the Bobcats’ 50.

Powell County put together a couple good drives, and the “run it right at you” offense chewed up much of the clock. Despite effective drives, the Pirates had trouble holding onto the football. The Pirates fumbled 5 times losing 4 of them. Breathitt capitalized on fumble recoveries and turned them into points. The Pirates’ running attack was led by Tyler Charles, Elijah Miller, and Larry Shifflet, and churned out 15 first downs, to the 13 of Breathitt. Unfortunatley the Pirates could not score on many drives.

Breathitt will be at home at the Mike Holcomb Athletic Complex next week to begin District play against Knott Central for their home opener and Senior Night. The Bobcat explosive offense will try to again put up more big stats in rushing and passing. Powell will also open District play as they travel to Lewis County.

Hope to see you on the RiverBank on Friday Night, but if not watch us on BSN’s LIVE Webcast on the BSN Facebook Page!