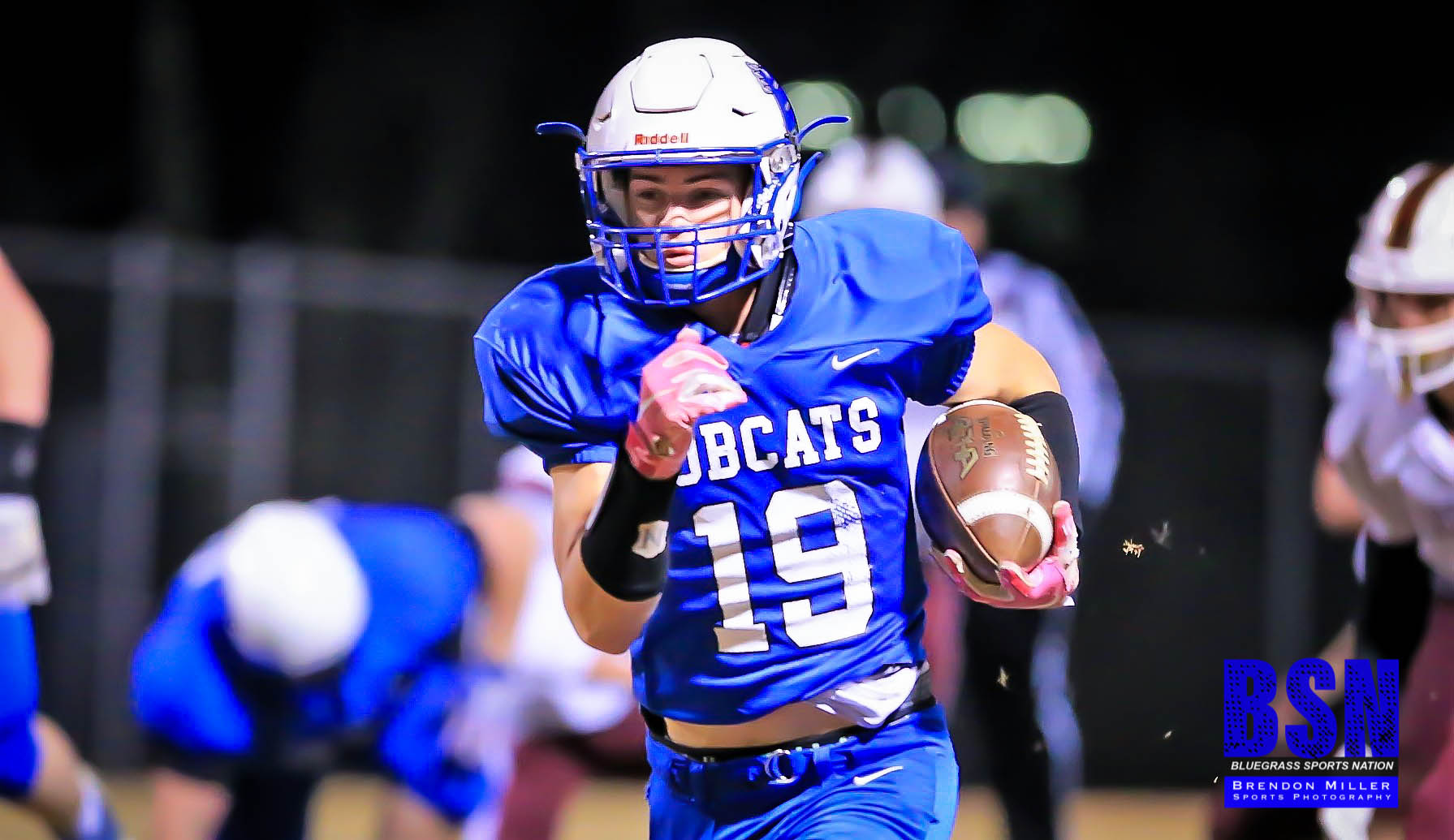 Breathitt County entered the District Championship on Friday Night with many questions in the air. Chiefly, could the defense stop the run against Leslie County as virtually every team on the schedule this year had found success on the ground. Secondly, could the offense continue to put up big numbers against Leslie’s stout defense.

The Bobcats answered both questions in the affirmative on Friday en route to their 41-19 win.

On offense, it has been the Lane Weddle and Jaylen Turner show all year and it would be again. With Cayden Bowling out following a burst appendix on Wednesday Night, Weddle had to handle virtually the entire backfield load. Lane responded emphatically posting 222 yards on 23 carries and three touchdowns. Weddle is quite simply a dynamic athlete and is a threat to score on any touch of the ball. Along with his great work on defense and in the kicking game, he is the heart and soul of this Bobcat team.

Leslie swept the Kentucky Football Coaches Association awards accounced earlier in the week with Eddie Melton being named Distict Coach of the Year and Senior linebacker Preston Spurlock being Player of the Year. The momentum from the announcement of the awards along with the return to the field of spectacular running back Trent Asher from injury had the Eagles primed for the upset.

Leslie immediately siezed the game momentum as Breathitt mishandled the opening kickoff and the Eagles recovered on the Breathitt 36. Six plays later Senior Quarterback Zack Parker scrambled to the left to put the Eagles on the board. Brannon Subblefield added to the PAT for a 7-0 lead.

Breathitt answered back with Weddle on their third play on one of his trademark spectacular runs. Weddle motioned from the slot into the back field and took the handoff and on a jet sweep to the left which Leslie had played very well. Weddle broke a tackle by Spurlock and then two more Eagles and sprinted down the sideline 40 yards to pay dirt. Lane then added the PAT to tie the game and Breathitt had taken Leslie’s early punch and punched back.

Breathitt’s defense had been the focal point of the Bobcat’s preparation all week given their performance in most games including the 500 plus yards given up on the ground in the final preseason game at Pike Central. The extra emphasis this week paid dividends as the Bobcats shut out the Eagles for the rest of the first half. With both Bowling and Brady Tincher out at linebacker, both due to injury, the corps of Darren Noble, Ethan Gibson and Bryce Hoskins was joined by Sophomore Tyler Bryant who had a big game. Along with the down linemen of Jake Strong, Colton Herald, William Long, and Teegan Smith, the front seven held Leslie to 133 yards on 33 carries and forced the five Eagle punts on the night.

After getting the ball back, Weddle scored again on Breathitt’s second possession on a one yard run, then added the extra point to increase Breathitt’s lead to 14-7 at the end of the 1st quarter.

In the second quarter, Jaylen Turner went to work in the air hitting passes to multiple receivers. Turner would go 9 for 16 on the night for 102 yards. Despite a drop on a long pass for a touchdown which forced Breathitt’s only punt of the night, Turner came back on the next possession and hit Bryce Hoskins from 16 for the Bobcats’ third score. Weddle again added the PAT to make the score at half time at 21-7.

Hoskins is taking on a larger role on offense in the playoffs with touchdown catches now in back to back weeks. Bryce had two catches for 45 yards and ran three times for 27 yards on Friday.

After the half, Leslie brought the game within a score as Parker hit Asher for a 65 yard catch and sprint to the endzone with 2:18 left in the third. The PAT was not successful leaving Breathitt with an eight point lead 21-13.

The Bobcats immediately went back to work and drive the ball 63 yards in 8 plays with Turner taking it in from eight yards out on the first play of the fourth quarter. Weddle added the PAT and Breathitt was back up two scores at 28-13.

Leslie was stripped on the kick off return and Breathitt recovered on the Leslie 20. On the second play, Weddle took the hand off up the middle and raced to the end zone basically putting the game away with 10:53 to go in the game.

Leslie would score on a 5 yard pass from Parker to Wyatt Ostrander and then Turner would run in another score from four yards to set the final margin.

Breathitt ran the ball 41 times for 303 yards behind the big men up front. Oline Coach Casey Allen stated that both Teegan Smith and Michael Hudson had outstanding games.

UP NEXT: Breathitt will travel to Fort Mitchell on Friday Night to take on Beechwood in the Regional Championship Game! Game time is set for 7:30 and we are evaluating if we will webcast the game on BSN!