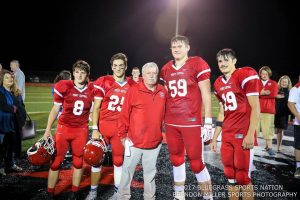 BSN Game of the Week – PCC vs Clay Co. – Photo by Brendon Miller

Perry County Central won the coin flip and elected to receive the football. Covering Perry Central in last week’s win over the Knott County Central Patriots, I am well aware of the Perry county Central rushing attack.  In tonight’s game the Commodores would heavily rely on the running game, and is a large factor in the success of this years team.  Perry County Central got on the board first with a 55 yard Touchdown by # 3 Chandler Caudill giving the Commodores an early lead of 7-0 with 9:25 remaining in the opening quarter. Clay County would take over the ball only to turn the ball over on a fumble at the 50 yard line. The Fumble was recovered by Perry County Central #8 Colten Walker.  Jayden Neace #34 would score on the possession rushing for a 3 yard Touchdown run.  The Commodores were now up  by two touchdowns with the score Perry Central 14- Clay County 0, 2:17 remained in the opening quarter.  The score stayed the same to end the first quarter of the game.

Jayden Neace who was stopped by Clay County Several times in the first half, came out refocused and had several big runs to open the second half.  On one play early in the third quarter Neace broke several tackles and gained 30 yards, before being brought down requiring several Clay County defenders to take down the powerful and quick running back.  Neace would later score on a one yard touchdown run, his second of the night.  Perry County Central would increase the lead to three touchdowns with the score 27-6.  PCC would go for the two point conversion and convert with #19 Woolum scoring, increasing the lead to 29-6. Clay County would take over the ball and made some big plays on the next possession.  John Gilbert #2 would find a whole and rush for a 25 yard gain, making several Commodore defenders miss.  Clay County would march the ball down the field all the way to the Perry County Central 15 yard line. On this series Clay County was facing a 4th and 8 and being down by three touchdowns, decided to go for it.  Perry County Central would stop the Tigers and regain possession.  On the next play of the game the crowd witnessed one of the most exciting runs of the night. Jayden Neace would rush the ball for an exciting 70 yard gain, before being brought down by a multitude of defenders at the Clay County 15 yard line.  Perry County would not score on the drive as a fumble by Woolum #19, was recovered by Clay County at the eight yard line.  At the end of the third quarter Perry County Central had a commanding lead of 29- 6.  Career Victory #300 seemed inevitable for Coach Tom Larkey, but in football nothing is certain until the game clock reaches zero seconds.

Clay County would get the ball and had a scoring drive to open the fourth quarter.  Clay County would have several big plays, that led to the scoring drive.  On back to back plays Clay County would march the ball down the field with a 20 yard rushing gain, followed by a 30 yard rushing play from Tanner Revis. John Gilbert #2 would find #32 Kyle Pennington in the end zone for a 16 yard touchdown play.  The Tigers went for the two point conversion and wasn’t able to convert.  The Perry County Central lead had been reduced to 17 point.  Clay County 12- Perry County Central 29.  The Commodores would find the end zone again late in the game with a passing touchdown from #25 Sluss to #19 Woolum.  The play would be the last scoring play of the game, giving the Commodores a 35- 12 victory over the Clay County Tigers.

With the victory in hand, Perry County Central was ecstatic.  The victory tonight gave Head Coach Tom Larkey his 300th career victory.  According to www.khsaa.com Coach Larkey is ranked @ tenth place in all time wins in the History of the KHSAA high school football.  Coach Larkey has a career record of 300 wins and 132 losses. Larkey is ranked in 5th place among active coaches, only trailing Coach Phillip Haywood of Belfry with 417 wins, Dudley Hilton current coach of Taylor County  with 361 wins, Mark Brown current coach of Elizabethtown 302 career victories,  and Larry French Southwestern’s head coach with 302 wins as well.  Larkey is a legend in High School Football, destined for the KHSAA hall of fame and a significant factor as to why Perry Central has become relevant.  Before the game tonight, I was able to research about coach Larkey and a recent article published by Mike Fields former writer in the Lexington Herald Leader working currently with the KHSAA. Fields would write about how Larkey has overcome many obstacles in his coaching career.  Coach Larkey has had three major surgeries during his tenure coaching.  In 2001 Coach Larkey overcome prostate cancer, and 2004 had quadruple bypass surgery.  In 2012 Larkey required a second open heart surgery.  The Coach is resilient and has stuck to the game he loves when others would have been long gone.  Larkey has been a head coach for 37 years with stops @ Rockcastle County, Harlan County, Laurel County and the last three years @Perry County Central.  During Coach Larkey tenure at Rockcastle County was some of the most successful of his career. Coach Larkey had accumulated 212 career victories in 23 seasons, winning six regional titles, and two runner up finishes in Class 3A KHSAA football championship before losing to Boyle County in back to back years in 2001 and 2002.  Coach Tom Larkey, you are a coaching legend and the difference you have made to Perry County Central has been immeasurable. Congrats to Perry County Central on the four and zero start and I commend Coach Tom Larkey on the coaching milestone.

After the game Bluegrass Sports Nation was able to be on the field covering the celebration.  We saw a lot of emotions coming from the Commodore faithful.  The student’s were ecstatic being pumped up after the huge victory.  The players could not be more excited to give Coach Larkey his 300th career victory at home on Commodore Field.  Coach Larkey had several family members on the field and couple of former players were on the field celebrating the momentous occasion.  Coach Larkey was presented a nice trophy commenting his 300th career victory.  Being on the field was a surreal moment and actually felt as if Perry County Central had won a State Championship.  Brendon Miller and myself interviewed several players including #34 Jayden Neace, #19 Jacob Woolum, #25 Jack Sluss, and #59 Sam Turner, about the impact Coach Larkey has made in their life’s.  The players all expressed love for the coach and Sam Turner stated “ This is the best Football moment of his life.”  All the videos can be viewed on our website @ www.bluegrassssportsnation.com and through the Facebook website.  We also caught up with Coach Tom Larkey on the field and interviewed him on the field after the game.  He talked about how he remembered his first time coaching, coaching against Tates Creek in the 1970’s.  He also thanked his players, stating he could never reach this accomplishment without the help from his players.  Larkey is a strong man, a leader, a motivator and a coaching legend.

The official stats for each school from www.khsaa.org isn’t available for either school, at the time this article was wrote.  I’m sorry to both schools, but without an official stat line I can not give the stat line of the game.

Perry County Central is now four and zero, off to one of the best starts in school history.  Perry County Central is facing an off week, before going on the road in week 6 to take on Letcher County Central. Clay County drops to one win and 3 losses.  Clay County will next play at home against Whayne County.  Good luck to both teams during the rest of the season, and it has a been a pleasure covering your respective teams.  For Week 5 of the KHSAA season BSN will continue our game of the week coverage.  We will be in Jackson, KY at the Mike Holcolmb Athletic Complex covering the Leslie County Eagles taking on the Breathitt County Bobcats.  Look out Jackson, Bluegrass Sports Nation is coming to your city.