Bulldogs Move on to Week 2 of the Playoffs 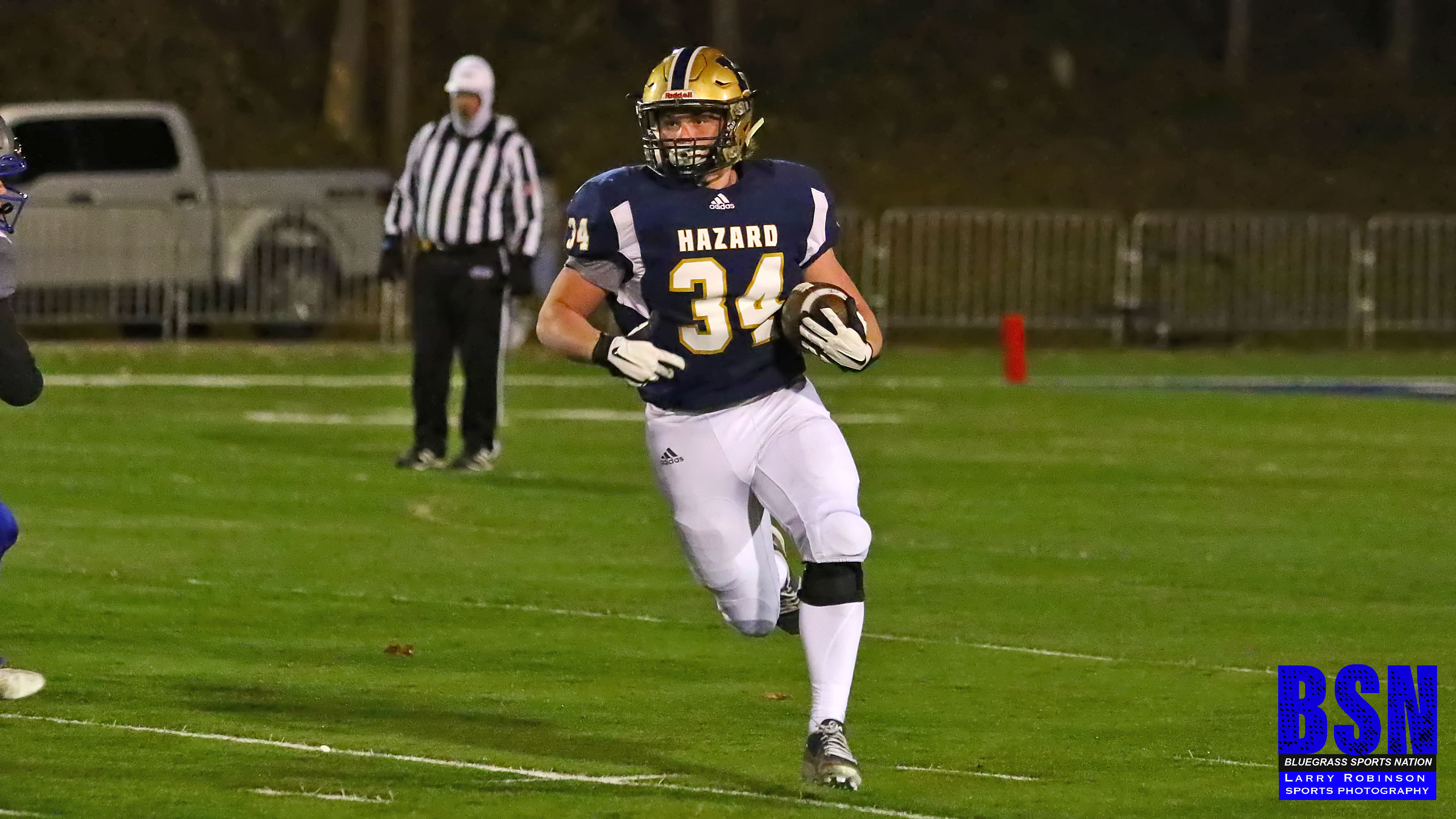 Hazard came into the game Friday night wanting nothing more than to move on and get a rematch against the Pikeville Panthers. Standing in their way was their district opponent, the Phelps Hornets. In the pair’s first meeting, the Hornets were sitting at .500 on the year, being 4-4. The last half of the season wasn’t kind to the Hornets and they fell to 4-6 before last night’s match-up with the Bulldogs. Hazard was also looking for some momentum as they had lost 2 out of their last 3 contests, falling to Pikeville in Week 8 (42-0) and Whitley County in Week 10 (19-10) and were in bad need of some confidence going deeper into the playoffs.

The Bulldogs started the night slow, but found their rhythm late and were able to handle to Hornets with ease. Hazard used what has become a familiar rotation of Nick Miller and Garrett Miller at QB to lead the Bulldogs to the 36-8 win. The story of the night for the Bulldogs was not the arms of the quarterbacks (G. Miller led with 60yds), but the blocks of the offensive line and the legs of the running backs. The offense combined for 270 yards rushing on the night. Hootie Thomas had a breakout game as the everyday defensive end abused the Hornet’s defense and and showed why he’s been a terror for opposing quarterbacks all season. Thomas averaged 25 yards per carry, going 101 yards and 1 touchdown on just 4 rushes. Freshman RB Elijah Gayheart also chewed up big yards on the ground coming in with 58 yards between the tackles and a touchdown. Max Johnson, Trajon Campbell, Hootie Thomas, Nick Miller, and Elijah Gayheart all had touchdowns against the Hornets. Andrew Ford led the Dogs in receptions with 48 yards on the night.

On the defensive side of the ball, if there was a 50/50 ball, or a ball on the ground, the Bulldogs were coming down with it. They had 4 take aways on the night. A big hit by Zane Deaton with a recovery and an onside recovery by Matthew Couch accounted for half the turnovers. The other half came when the Hornets tried to put the ball in the air against the Bulldogs. Hazard was able to come up with 2 interceptions, with one being a 40 yard house call for freshman Max Johnson. Trajon Campbell came down with the other INT. The Bulldogs did a good job against one of the most talented backs they’ve faced all year in Dominic Francis. Francis not only ran the ball last night, but he also completed passes for the Hornets when their back was against the wall.

The special teams had a great night against the Hornets as well. Hazard pinned Phelps all night deep on kickoff with the best coverage of the night holding Phelps on the 4 yard line. Not only did they cover well on kickoffs, their extra point was clicking on all cylinders as they completed two, two point conversions from the Bulldog’s swinging gate formation. One option pass from Trajon Campbell to Reece Fletcher and another run from Campbell. Jonah Helm continued to be consistent on the season going 2/3 on extra points with the miss being a blocked PAT.

Hazard moves on and will face the Pikeville Panthers in week two of the KHSAA Commonwealth Gridiron Bowl. The Dogs will have to play a great game if they plan to move on against the Panthers next week. Hazard must be solid in all facets of the game. One key for Hazard will be special teams play. The often forgotten about aspect of high school football could possibly turn the tide for the Bulldogs. They must cover well on kicks, block well on returns, and get special team points when they can. They also must be in the game mentally on every special team’s play or a simple PAT can turn into a two point try from the 1 1/2 yard line on a Panther attempt to draw you off sides and get Pikeville an easy two points. All this and more will be talked about on Bluegrasssportsnation.com in the Hazard v. Pikeville preview on Thursday. Be sure to follow BluegrassSportsNation.com for high school football, basketball, and volleyball this week, as well as Kentucky Wildcat Basketball and Football, Louisville Basketball and Football, and NFL action. BSN would like to thank our sponsors Dr. Jim Caudill dentistry, Hazard Village Flea Market, and People’s Bank and Trust of Hazard.