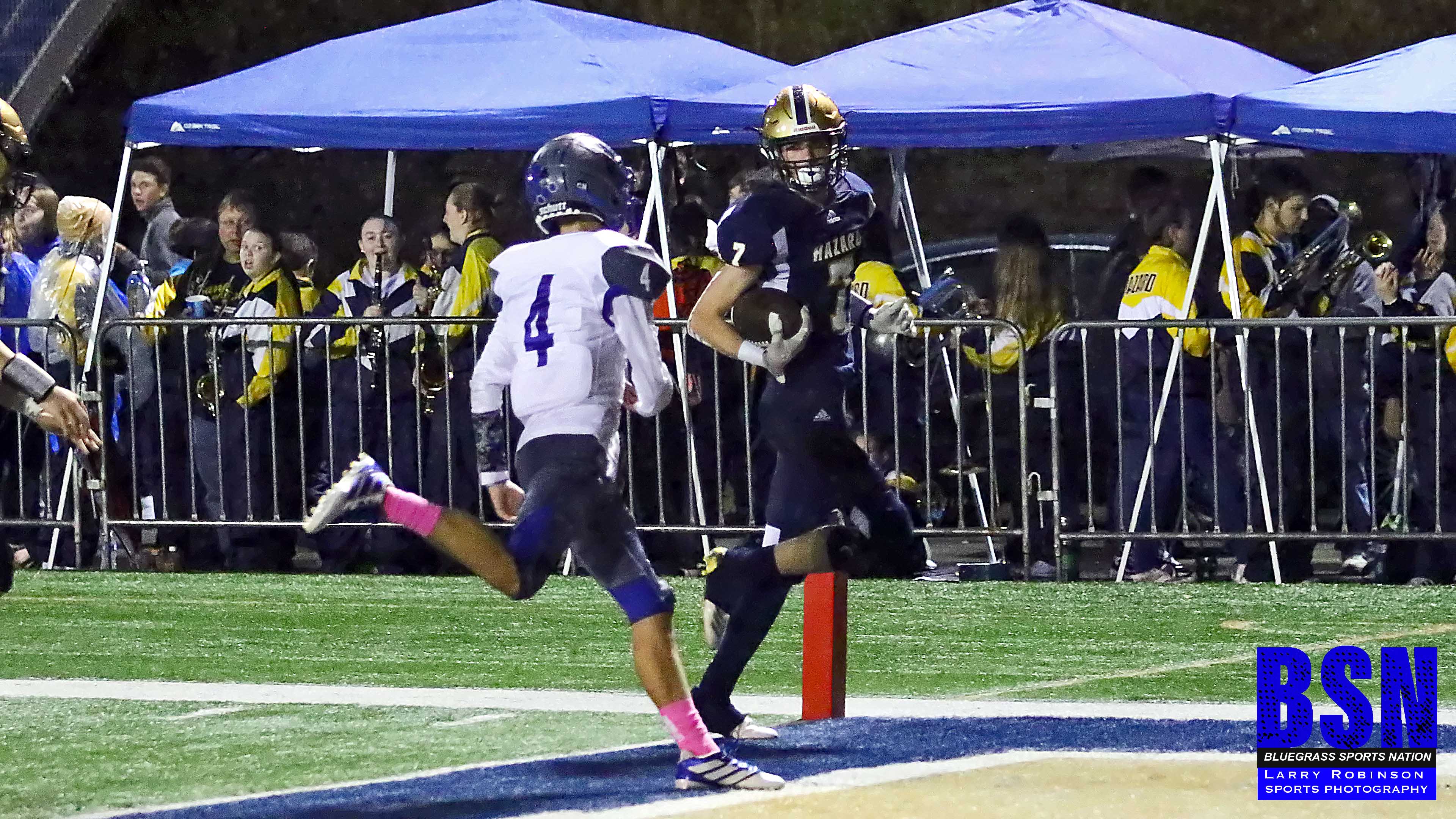 Hazard came into the game Friday night riding a 2 game losing stretch and were looking to get back into the win column against a 4-4 Phelps team. A first round home playoff game was on the line when the Hornets and Bulldogs squared off on a rain soaked homecoming night. The Bulldogs’ last two games had been against, a then, #1 in 2A Somerset and a #1 in 1A Pikeville. Both teams had pushed this young Bulldog bunch to the limit, with the Briarjumpers taking them down 21-9 and then a rout 42-0 at the hands of the Panthers. Hazard was in desperate need of getting back on track both offensively and defensively.

The Bulldogs would start the night with a bang and establish the running game early. On just the first play from scrimmage, Trajon Campbell took the handoff and outran all defenders on a 60 yard sprint to the end zone. That run was the second 60+ yard run from scrimmage this season for Campbell. The first of those was an eerily similar situation against Danville that saw Campbell outrun the Admirals to the end zone to put the Bulldogs up quick in what would end up being a Hazard win in week 4. The Bulldog’s defense backed that up with a three and out to give the ball back to the offense. The Hornets would hold the Bulldogs on this possession and forced a Hazard punt. After the defense held again, Hazard would put together a drive that saw QB Nick Miller find the end zone on the ground from 3 yards out after a drive that saw a big 3rd down completion to Reece Fletcher to get the Dogs within striking distance. After another Hazard defensive stand, QB Garrett Miller led the Bulldogs down the field with a completion to Campbell Davis that set up an Elijah Gayheart 2 yard run. After a stop by the Bulldog defense, Phelps’ special teams pinned Hazard deep in their own territory on the 5 yard line. It was Nick Miller’s turn to lead the Bulldogs down the field again as the Hazard QB completed passes to Andrew Ford, Tyson Turner, and Mason Collins. Hootie Thomas chewed up chunks of yards also before Nick Miller found Ford for a 21 yard pitch and catch. The next offensive drive had Garrett Miller back in the driver’s seat finding Hank Pelfrey on three separate passes and Reece Fletcher going airborne to find the end zone to cap an 85 yard drive and end the half with the clock running and a 36-0 Bulldogs lead.

The Hornets would get on the board early in the second half when on the 4th play of offense they would go 55 yards up the middle to find the end zone for what would be their only score of the night. The next offensive series would feature Hazard’s 3rd QB of the night with Keaton Napier at signal caller. Freshman running back Elijah Gayheart rang up yard after yard on the ground and Napier found Tyler Smith on a 20 yard pass before Gayheart found the end zone from 23 yards out, leaving Hornets in his wake. That score would be the final of the game, giving the Bulldogs the 43-7 win.

The Bulldogs will step up to class next week to take on 5A Whitley County. Whitley has done well this season, holding 6-3 record to match the Bulldogs 6-3 season. The win against the Hornets set the first 2 rounds of the playoffs for the Bulldogs. Phelps will play at Hazard in round 1 of the KHSAA Commonwealth Gridiron Bowl. The Bulldogs will then travel for a rematch at Pikeville in round two. Check back in with www.bluegrasssportsnation.com on Thursday for a preview of the Colonels and Bulldogs.

BSN would like to thank our sponsors Dr. Jim Caudill dentistry, Hazard Village Flea Market, and People’s Bank and Trust of Hazard.