Bulldogs Take Down Floyd Central in the Jungle 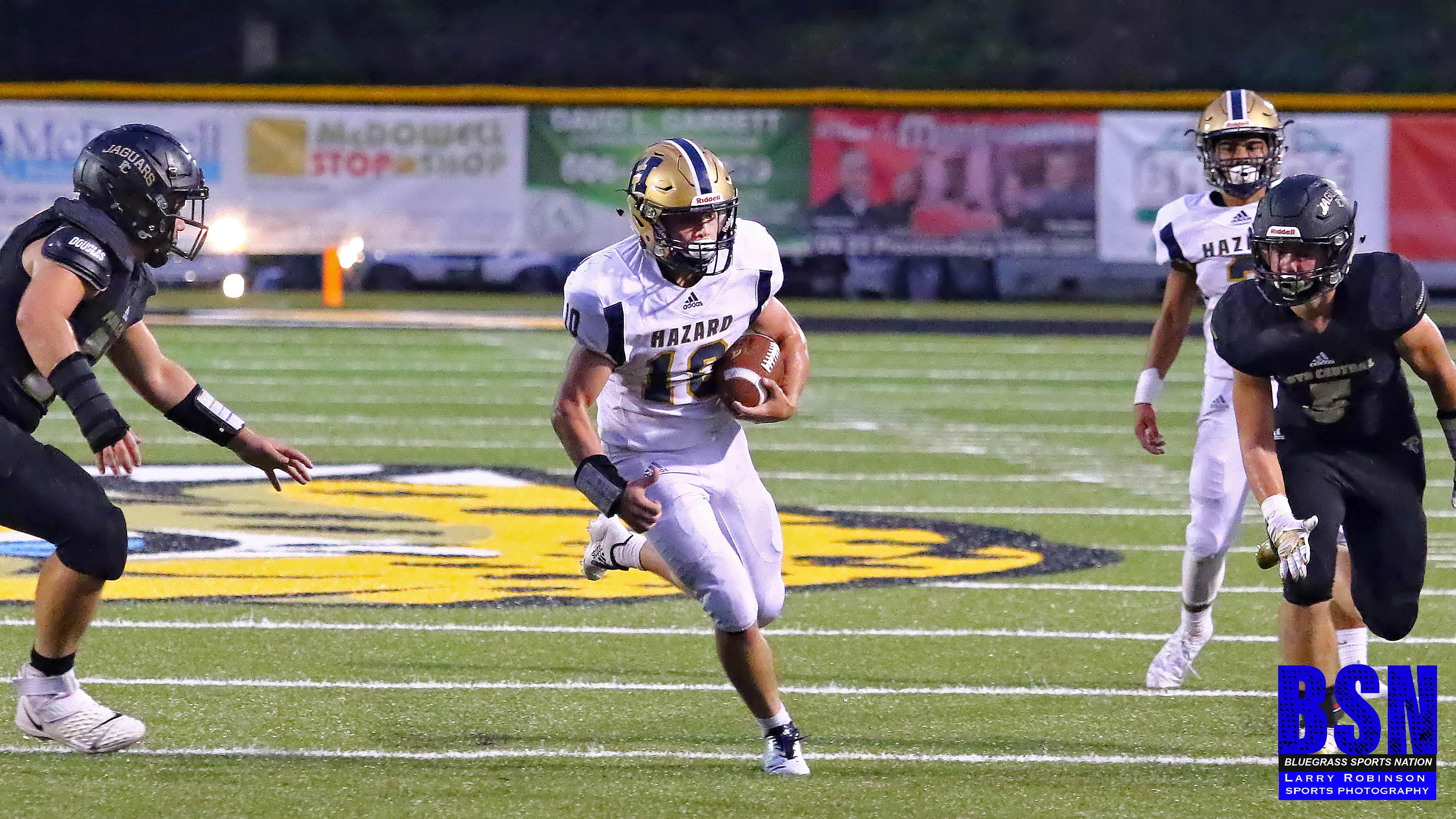 On a hot, muggy, September Friday night, the Hazard Bulldogs traveled to the campus of Floyd County Central and faced off against the Jaguars for the first time since Allen Central High School and South Floyd High school consolidated in 2017. The consolidation had injected that community with a new excitement for football and the Jaguars have seen plenty of success in its first two years of existence, even moving on to the second round of the 3A KHSAA Commonwealth Gridiron Bowl in year one. Year three has started rough for Floyd Central and entering Friday night’s game against the Bulldogs the Jaguars were 1-2, with loses coming at the hands of Clay County (44-20) and North Laurel (28-6) and they had lost their starting QB and play-maker Caleb Hagar to injury early in the North Laurel game. Their lone win of the season has been a 43-7 whipping of next county rival Knott County Central. The Bulldogs come into the game with a 1-1 record falling in week 1 to Harlan County (22-20) and winning with ease the following week at Prestonsburg (47-14).

The game started fast for the Bulldogs as Garrett Miller completed 34 yard screen pass to Tyson Turner who was sprung by big blocks from Andrew Ford and Thomas Massey. The fast start would come to an end short of the end zone when Garrett Miller threw his first INT for the season when a speedy FC defender slipped under an out route and took the offering 40 yards to set the Jaguars up at mid-field for their first offensive possession of the game. The Bulldog defense held strong and forced the first punt of the game that would set up Hazard deep in their own territory to begin their second drive of the game. After completions to Andrew Ford and Tyson Turner, Trajon Campbell scrambled to set the Dogs up deep inside of Jaguar territory. For the second time of the night, the Bulldogs were turned away as they were knocking on the door of the end zone and Floyd Central would take over on downs. The Bulldogs defense would come up big on their next series after Timmy Owsley stood up the Floyd Central runner and Brayden Thomas delivered a hit that popped the ball loose. Hazard’s Zane Deaton then came up with the recovery. The Bulldogs wouldn’t be denied this time and punched the ball into the end zone by way of a Trajon Campbell run up the middle from 17 yards out as time expired in the first quarter. After the failed 2pt conversion, the Bulldogs were on top 6-0. On the next Floyd Central possession, Matt Couch was able to force a fumble and Cameron Caudill hauled in the recovery to set the Bulldogs up on the Jaguar 25 yard line. After a couple of plays, Trajon Campbell again found the end zone, this time from 13 yards out. After another failed 2 pt conversion the Bulldogs were up 12-0 early in the second quarter. Floyd Central was again turn away on their next possession as Reece Fletcher came up with a big pass deflection on 4th down to let the Bulldogs take over on offense. The Bulldog offense sputtered as Miller threw his second pick of the game on a mis-communicated screen play. The final score of the half would come on a Garrett Miller scramble from 22 yards out after some quick hitting passes to Mason Collins and Turner and a hard run by Trajon Campbell. The PAT kick was good by senior Reece Fletcher. The Jaguar offense would be held out of the end zone right before the half on a big QB sack by senior Matthew Couch. That would set the score at halftime 19-0.

The second half was in a lightening delay longer that it took to finish the game. The two teams swapped some possession early in the 2nd half and the Jags looked as though they had something going offensively when the Bulldogs forced another turnover and regained control. The Dogs drove the ball down the field and targeted Andrew Ford and Reece Fletcher several times on the drive before Fletcher finally found the end zone on a 10 yard dart thrown by Miller. The Bulldogs then went up 27-0 with a Nick Miller 2 point conversion. Both teams then agreed to run the clock to finish the game with 8:50 to go in the 4th. After the Bulldog defense forced a punt, Floyd Central mishandled the snap and sat the Dogs up deep in Jaguar territory again. Andrew Ford would score the final touchdown of the night for the Bulldogs on a 20 yard reception from Miller and put Hazard up 34-0. Floyd Central would then add one score late against the Bullpups to set the final score at 34-8.

Hazard moves to 2-1 on the season and Floyd Central to 1-3. The Bulldogs will move to the heart of their schedule next week and what should start preparing them for a playoff run. They will face very good and highly ranked opponents in the next few weeks. Next up will be the Danville Admirals. The Danville game will close out a 3 week road stretch for the Bulldogs. Danville looks on film like they have plenty of speed to go around. Preview for that game will be on Bluegrass Sports Nation on Thursday. They will then play what may be Coach Joe Chirico’s best Paintsville team to date. Then highly touted and potential state title contender Somerset will test the Bulldogs. Both of these games will be at Hazard’s Daniel Field. Two weeks following that, Pikeville will roll into town and will test the Bulldogs for the 3rd out of 4 weeks and a district championship will likely be on the line and that would have big implications come playoff time. Check in with Bluegrass Sports Nation to stay up to date on UK, UL, local College, and high school sports coverage throughout the week.