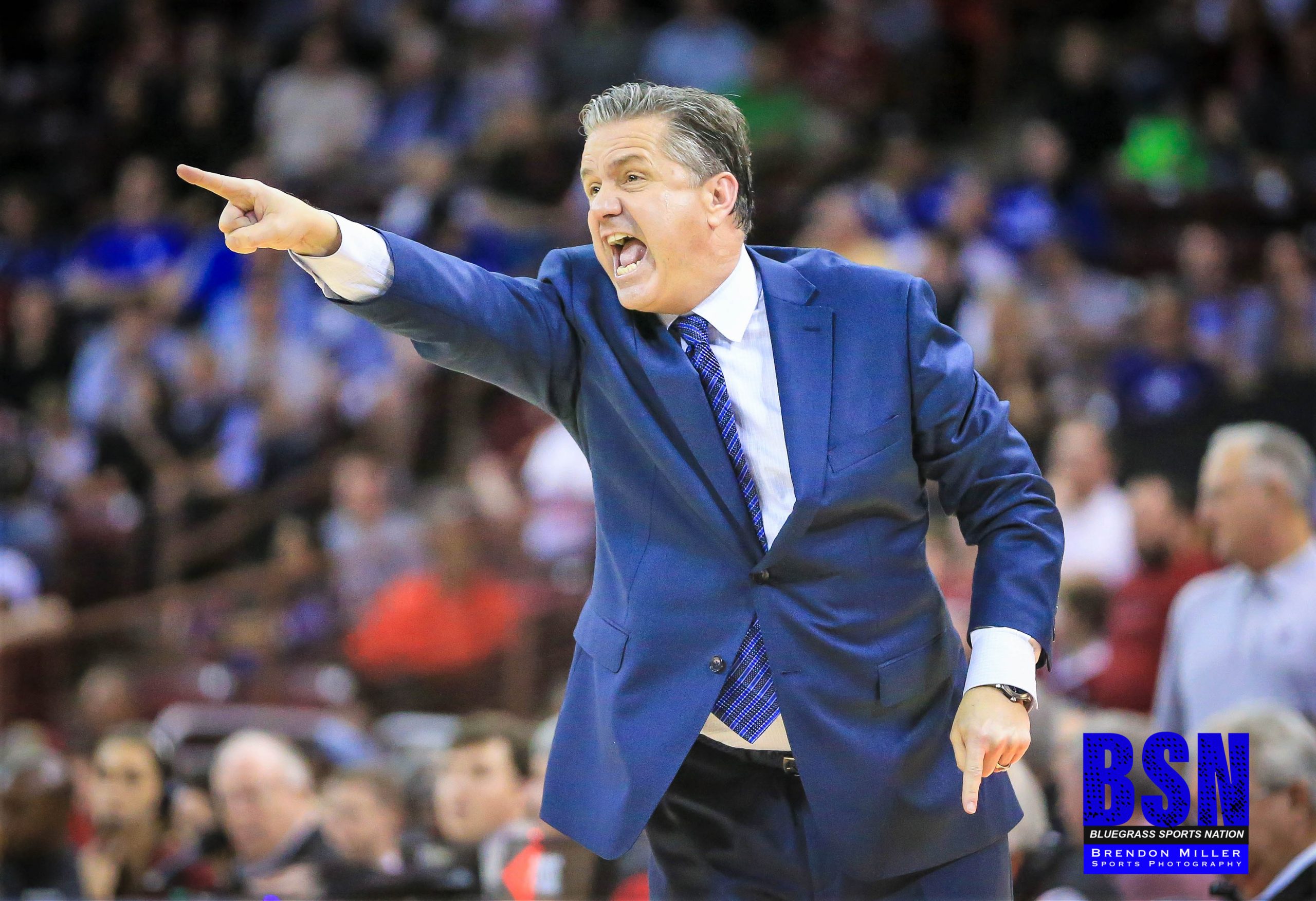 The message was simple and Kentucky responded to adversity with ease in a 73-66 win at Arkansas on Saturday.

That message came after Kentucky coach John Calipari was ejected following a double technical foul with 8:19 remaining and the Wildcats in a 44-44 deadlock. The Razorbacks took a 47-44 lead after making three of four free throws, but Kentucky went on a 15-2 run that gave the Wildcats enough of a surge to escape with their eighth consecutive win over the Razorbacks, including the last three in Fayetteville.

“What we talked about was it’s crunch time and it’s an execution game,” Kentucky associate head coach Kenny Payne said. “The last thing they’re expecting us to do is to rebound and push the ball up the court. That’s what we did. We rebounded that ball and we flew (up the court) first and then if we don’t have anything, we’re going to execute. By doing that, we got a couple of layups, we got a wide-open three and it opened the game up for us to get a cushion.”

Payne and assistant Tony Barbee took matters into their own hands and let point guard Ashton Hagans run the show on offense and displayed a 2-3 zone on defense to keep Hagans on the floor down the stretch with four fouls. He eventually fouled out, but only after the decisive spurt. Payne said the obstacle was a monumental climb at the time.

“I think it was a huge mountain,” Payne said. “I think, first of all, coach (Barbee) doing his own stuff was unbelievable. It gave us the ability to play Ashton Hagans with four fouls, which we need him on the floor. On the other end, we ran a play, where it’s Ashton’s play where he gets to make decisions and like a true point guard, he made the right decisions, which allowed the (run) to go to 15-2 in that spurt.”

Payne credited the Wildcats for not getting rattled following Calipari’s ejection.

“We teach the last eight minutes of the game, the last 10 minutes of the game is winning time for us,” Payne said. “Regardless of what has happened before that, it’s going to come down to those last pivotal minutes of the game. You better embrace it, we talk about it in practice, we look at it on film, we talk about it when we’re watching NBA games, in playoff atmospheres, it’s going to come down to critical points in games. How are you going to handle it? It’s not going to be easy. Guys are going to make tough shots at critical times. You better make sure we’re executing defensively and executing offensively.”

Nick Richards scored 17, reaching double figures for the sixth straight contest and just missed a double-double with nine rebounds. The 7-foot junior is averaging 16 points per game over the past six games.

Making his first start in seven games, Immanuel Quickley had a double-double with 13 points and a career-high 10 rebounds. Hagans followed with 13 points and six assists, the 14th consecutive game the sophomore guard has dished out five assists or more. Tyrese Maxey added 11 points and Keion Brooks scored 10, including four free throws down the stretch and seven rebounds.

Payne said the play of the team’s veterans proved to be beneficial against the Razorbacks.

“At the end of the day, our veterans have to be good,” Payne said. “You look across the country and you see all these teams, there’s not a lot of wiggle room for anybody, nobody is more talented than anybody else. We say this every day, we can beat anybody, but we can lose to anyone. If you’ve got sophomores and juniors for us at Kentucky, that’s veterans and so those guys have to lead us and they did a great job tonight.”

Although a success, Payne was hoping Calipari could have finished the game.

“ I hate to say it like this, but I wish he hadn’t got tossed,” Payne said. “… (He said) nothing on the way out and probably wanted to choke a few referees, but when we got in, he gave me a hug and said, ‘I’m proud of you. I’m proud of these guys, they fought through it.’”

“I just told him this is what you’ve built — overcoming adversity,” he said. “The momentum of that game was headed in their favor. This is a very good Arkansas team — by their record and the way they play. They create a lot of mismatches and they have a lot of good players. For us to come here and come out with a ‘W,’ against a well-coached team, whose atmosphere and culture is changing and (Eric) Musselman is doing a great job here, says a lot about our team.”