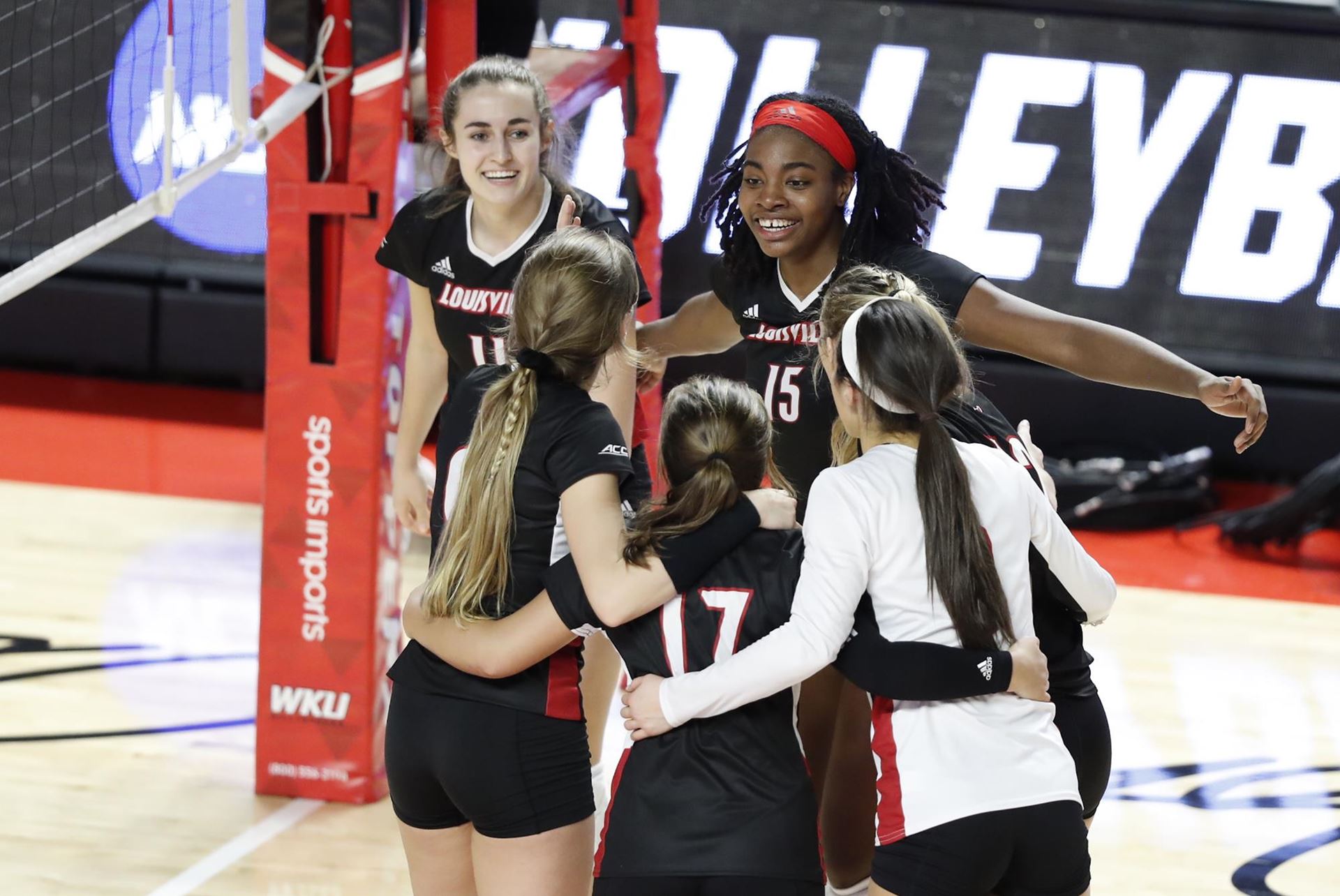 BOWLING GREEN, Ky. —Aiko Jones tied a career best with 20 kills to lead the University of Louisville to a 3-2 win over Western Kentucky in the NCAA Second Round to advance to the Cardinals fifth Sweet Sixteen and the first since 2005 Friday night in Bowling Green, Ky.

We have been in five set matches a lot this year and we have not always come out on top,” said Dani Busboom Kelly, UofL head coach.  “I think the experience of being here before and knowing we can do it, and if it gets close in that fifth set, we still had a ton of confidence that our team believed that we could win. We expected to win. That is how we talk about positivity and expectations.  We visualize ourself winning the match before it even starts.”

In the first set, WKU used .371 hitting to keep the Cards at arm’s length. The Toppers had a six point lead at 11-6 when the Cards were called for hitting  the antenna. The Cards got the serve back on a WKU serving error and took their first lead at 16-15 on a block by Anna Stevenson.  The teams traded points until the Hilltoppers were able to string together three straight points and spark a Cardinal timeout at 20-17. UofL stayed got to 23-21 on a kill by Aiko Jones but WKU scored two straight for the 25-21 win.

UofL behind by five early in the second set at 12-7 on a hitting error. A block by Amber Stivrins and Amaya Tillman sparked an 11-0 run to to up 18-12 and force the Lady Toppers to burn both their timeouts.  After UofL got to set point at 24-18 on a WKU service error, the Hilltoppers managed to score three times before a kill by Anna Stevenson gave UofL the 25-21 win and even the set scores. The Cards hit .175 but added five blocks and a pair of aces in the set.

Early in the third set, WKU used a 5-0 run to take an 11-5 lead  and then spread it to 14-7 before the Cards dug in and reeled off four straight to cut the deficit to one at 14-13.  After the media timeout, the teams traded points until the Cards got the lead back at 20-19 on a block by Amaya Tillman and Amber Stivrins. The Cards kept up the pressure until WKU had to call timeout down 23-21 after a kill by Tillman. UofL got to set point on a net call and then Aiko Jones put away the set winner for the 25-21 win.  UofL hit .049 and WKU hit .079 in the set with the difference coming in four blocks by the Cards.

The Cardinals caught Western Kentucky flat-footed in the fifth  and went out to a 9-2 lead, forcing WKU Coach Travis Hudson to use both his timeouts.  The Hilltoppers could not gain traction as the Cards took the set 15-5 for the win.

“Western  Kentucky has done some great things this year,” said Busboom Kelly. “From what I have heard  Travis Hudson has said and from what I have read is that maybe they weren’t expecting to have such an amazing year. To be able to beat them twice is rewarding. But like Aiko Jones said, they are a great team and we are going to have many more battles in the future. This is not the last one, or their last chance to beat us.”