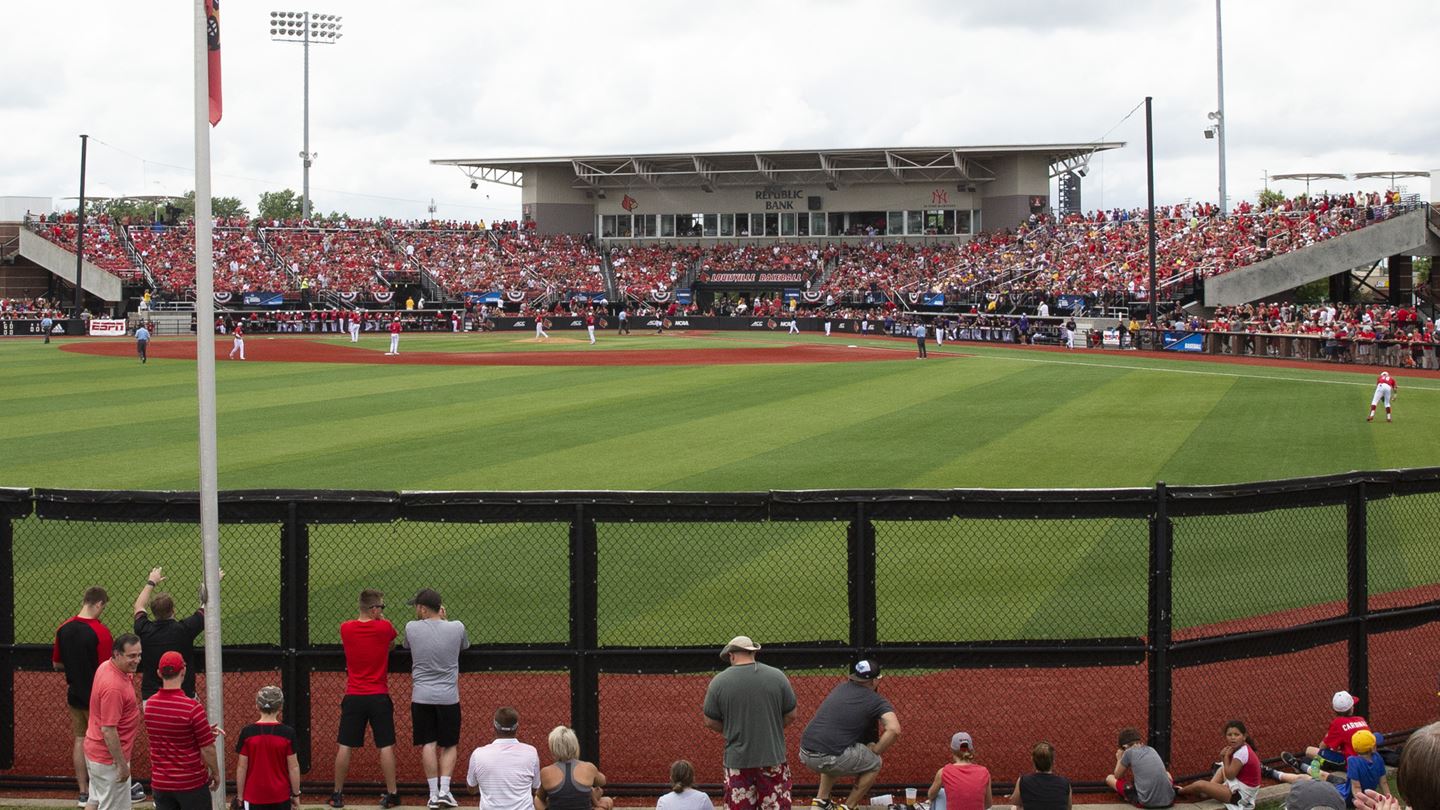 First pitch on Friday is scheduled for 6 p.m. ET at Jim Patterson Stadium.

The 11th-ranked University of Louisville baseball team hosts Duke for a three-game series beginning Friday at 6 p.m. ET at Jim Patterson Stadium. The Saturday and Sunday contests are each scheduled for 1 p.m. ET. All three games can be seen on ACC Network Extra and radio coverage can be heard on 93.9 The Ville.

Jim Patterson Stadium’s capacity has been increased to approximately 50 percent starting with this weekend’s series against Duke. Additional tickets are on sale now at uofl.me/2021bsbtix.

Per state and local health and safety policies, masks will still be required to be worn at all times inside Jim Patterson Stadium unless actively eating or drinking. Children ages 5 years and under will not be required to wear a mask.

The Cardinals got back into the win column on Tuesday night with a 7-2 victory over No. 2 Vanderbilt. Alex Binelas and Henry Davis each homered, while Carter Lohman allowed one run over four innings for the win. The victory was Louisville’s eighth this season against ranked opponents.

Louisville and Duke have played 10 times previously, all coming since the Cardinals joined the ACC before the 2015 season. UofL is 8-2 all-time against the Blue Devils with six straight wins in the series. Duke is making just its second trip to Jim Patterson Stadium, with the Cardinals winning two out of three on their home field in 2017.

The last time the two teams met, Louisville captured a three-game sweep of the Blue Devils in Durham. Henry Davis had a strong series, going 4-for-10 with the first two home runs of his collegiate career. Jared Poland started all three games of the weekend and launched his first career home run as well.

·        Louisville’s offense ranks among the best in the ACC this season. The Cardinals currently lead the ACC in batting average, on-base percentage, runs, triples and stolen bases. UofL is second in the league in slugging percentage, hits per game and runs per game.

·        The Cardinals have been the one of the best in the country on the basepaths this season with 93 stolen bases, 39 more than anyone in the ACC. Levi Usher leads the ACC and is fourth in the country with 24, while Cooper Bowman is second in the ACC with 15, Luke Brown fourth with 13, and Henry Davis is seventh with 10.

·        Alex Binelas got off to a slow start but has returned to being a major run producer in the middle of the Louisville order. Over his last 22 games, Binelas is hitting .329 (28-for-85) with three doubles, two triples, 11 home runs and 37 RBIs. He registered his third career multi-homer game against Florida State, including his first career grand slam, and later homered in all three games of the series at Virginia. Binelas also recorded two triples against Western Kentucky, becoming the first Louisville player with two triples in a game since Ty Young did so against Notre Dame on March 28, 2013.

·        Henry Davis has been the most consistent hitter for the Cardinals this season. Davis saw his 23-game hitting streak come to an end in the second game at Notre Dame, the only game he hasn’t recorded a hit this season, and currently has a 16-game hit streak. The sophomore leads the ACC in batting average and on-base percentage. He also ranks top 10 in hits, stolen bases, walks, runs, RBIs, total bases, home runs and slugging percentage. Davis has 10 stolen bases after having just one through his first two seasons at Louisville. Over his last 16 games, Davis is hitting .448 (26-for-58) with four doubles, five home runs, 13 RBIs, 15 walks and a .584 on-base percentage.

·        Luke Brown has quietly been a hitting machine for the Cardinals in 2021. The junior outfielder leads the team with 18 multi-hit games, including eight in the last 14 contests. Over the last 14 games, Brown has a .362 (21-for-58) batting average with five doubles.

·        Trey Leonard is having the best season of his Louisville career in 2021. The junior currently ranks fifth in the ACC with a .362 batting average. Leonard had a career night at Cincinnati going 4-for-6 with three RBIs against and hitting a go-ahead home run in the sixth, a game-tying double in the eighth and adding another double in the 10th. Over the last 16 games, Leonard is hitting .361 (22-for-61) with five doubles, a triple, three homers and 15 RBIs.

·        Dalton Rushing made just two starts between March 7 and April 10. He returned to the starting lineup on April 11 against Florida State and tallied a pair of hits, including a game-tying double. Rushing then started the first two games at Virginia and proceeded to homer in each contest, and then put together a three-hit night with another home run at Kentucky. In his last seven starts, Rushing is 9-for-25 (.360) with two doubles, three home runs and 10 RBIs.

University of Louisville athletics has continuously worked with state and local health officials to update attendance policies as the heath climate improves. UofL officials sought and received permission to increase the percentage capacity for Louisville baseball home games at Jim Patterson Stadium to approximately 50 percent beginning with the Duke series.

The Cardinals began the season with capacity set at 20 percent and have been maxed at 880 people in attendance for home games prior to the increase.