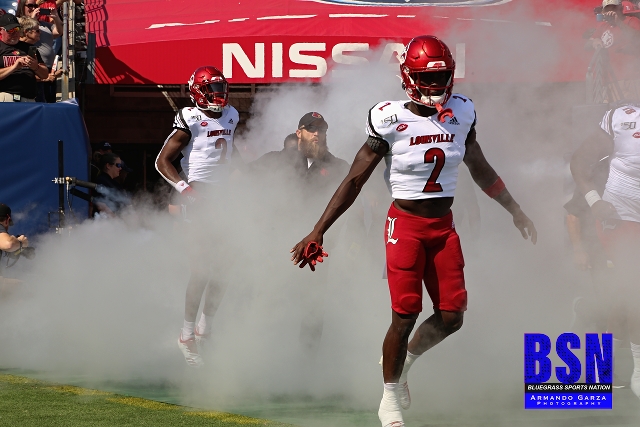 Louisville is coming off a bye and has an opportunity to snap a 9-game conference losing streak. The task at hand will be daunting as Boston College comes into play Louisville, in Cardinal stadium, this Saturday.

Boston College is 3-2 on the year and 1-1 in the conference. The Eagles have beaten Virginia Tech, Richmond, and Rutgers while losing to both Kansas (48-24) and to Wake Forrest just this past weekend (27-24).

Conceptually, Wake Forrest is a very similar to Louisville on the defense side of the football, particularly with how it deploys its defensive front. “First-down” will be key this week for Louisville as BC’s running-backs, AJ Dillon and David Bailey, are both 240-pound plus guys who can stumble into the back end of the BC offensive line and still gain five yards. Keeping BC in uncomfortable down and distances will be a key for the Carndinals’ prospects of winning the game.

One way to do this is by utilizing the type of play, up front, Louisville is accustomed to employing and which Wake Forrest used effectively in BC’s last game. Louisville will align in an odd front against the Eagle’s compact offensive sets and bring the LBs up into the box to contain the running game.

Look for Louisville to gap, slant, and penetrate up front and try to hit the RBs from BC low and before they can get any momentum going north and south. BC is the top rushing team in the ACC and are adept at picking up what Satterfield calls, “nasty yards.”

While there should be a decided commitment to crowding the box defensively, it isn’t like the Eagles aren’t efficient throwing the football. QB, Anthony Brown only has thrown two interceptions in the first five games. Both of the interceptions were thrown in game five, against Wake Forrest. Brown isn’t a player who will get his team beaten very often. Brown’s not flashy but he’s steady and makes good decisions more often than engaging in a fool-hardy, swash-buckling, down-field, low percentage play.

Offensively for the Cardinals, we will have to wait and see how much (if any) Jawan “Panther” Pass plays. Pass is still day-to-day, and further along than he was prior to the FSU game, but he isn’t 100%. He has been throwing to receivers in practice but hasn’t been participating in the contact sessions.

Malik Cunningham is expected to go and it is believed, though he has been held out of contact as much as possible since first getting injured in the Western Kentucky game, that he will return to full practice participation today (Tuesday, October 1, 2019). Freshman, Evan Conley has been getting a ton of practice reps and he has benefited from the attention and looked capable. Satterfield has indicated he is confident Evan Conley can move his football team if called upon.

The Cardinals have used the off-weak to clean up on their fundamentals. In addition to that, the Cardinals also took advantage of an opportunity to take a few days off from practice to clear their heads and recharge.

This is an important game for the Cardinals as it is a game Louisville can certainly win. However, to meet with success, the Cardinals need to get the Eagle’s offense off the field and give the Cardinal offense opportunities to ring up some points.

On a personal note, both BSN, and this author particularly, is a friend of both Cole Bentley and Cole’s parents, Fred and Emme. The Bentleys are from the Belfry area in Pike County, Kentucky.

Cole, who started much of last year at offensive center but is currently listed behind TJ McCoy on this week’s depth chart, has asked his girl-friend, Brianna Sullivan, to become his betrothed. In what has to be one of the biggest upsets in love history, she said “yes” to the big-fellow and the two of them are engaged. Congratulations to the happy couple who remind many of a modern day “Beauty and the Beast.”

We will have all of the action from the Louisville/Boston College matchup for you on BSN so make sure you are following us on Twitter and Facebook during the game and we will endeavor to keep you apprised of all the proceedings.

For the Bluegrass Sports Nation, this is Fletcher Long, your U of L football correspondent, reminding Cardinal Nation to PLAY THROUGH THE WHISTLE!