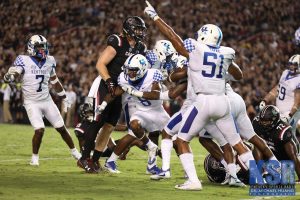 Road trips are tough. I’m not talking necessarily about the UK Football team traveling to away games with their cushy charter flights and first-class hotels. I’m referencing the trips made by the lowly sports journalist covering the team—travels punctuated by endless drives, budget accommodations, and greasy fast food.

For me, the trip to Columbia marks my second endless drive in the last three weeks. It’s actually a homecoming of sorts since I lived for three years in the Midlands area back in the mid-eighties. I learned at that time how important Gamecock Football was in the Palmetto State, and how seriously their fans worship the pigskin.

Williams Bryce Stadium serves as South Carolina’s altar for football worship. It’s a rather intimidating environment for visiting SEC foes. Kentucky coach Mark Stoops acknowledged just that in his press briefing earlier in the week. “I was really pretty amazed the first time I ever played down there with the atmosphere,” he said. “It was fantastic. Really great venue.”

On this particular evening, Williams Bryce Stadium is “blacked out” with 82,493 rabid South Carolina fans hungry for wildcat. Many have liquored up for the 7:30 pm kickoff by tailgating in the Cockabooses–a string of opulently refurbished railroad cars parked outside the stadium. Once inside “the cockpit,” you can feel the ghosts of George Rogers, Steve Spurrier, and Jadeveon Clowney freely roaming the concourses. The press box begins shaking as the fans wave white towels in sync to the tune of the grossly overplayed “Sandstorm” while an exceedingly irritating crowing of the Gamecock mascot reverberates through the loudspeakers. The whole setting is thunderous, menacing, and pretty darn impressive.

Kentucky is NOT impressive coming out of the gate this evening. Despite allowing a touchdown on the first play from scrimmage, throwing an interception on their first offensive possession, and fumbling on their second, the Cats surprisingly found themselves ahead 7-6 on a Benny Snell touchdown at the end of the first quarter. Gamecock fans went from deliriously deafening to somberly silent within the span of fifteen minutes.

The rest of the evening was meticulously methodical, with offensive coordinator Eddie Gran calling the shots with the precision of an experienced oral surgeon in search of an abscessed wisdom tooth. The Kentucky defense consistently made huge stops, while allowing South Carolina to rack up 361 total yards—68 of which came on the initial long pass play and only 54 of them on the ground. The defensive line, which at the start of the year was the biggest question mark has suddenly become an obvious strength. Benny Snell finished the evening with 32 rushes for 105 yards and two touchdowns. Final score: Kentucky 23, South Carolina 13. I’ve seen a lot of UK football games. I don’t think I’ve ever witnessed a bigger turnaround from such a dispirited start.

Afterwards, Coach Stoops summed it up perfectly. “I’m just proud of the team,” he said. “You take a shot right on the chin to start the game, the place is going wild, and we embraced it. We took the shot and went right back to work. That doesn’t even phase us. And that’s what I love about this team.”

As the season unfolds, a couple of things are becoming crystal clear. This team plays best with an edge. From the head coach on down, they continuously feed off of disrespect, scorn and disdain from their opponents and critics alike. They love being ignored, overlooked, and glossed over by media. If they truly derive motivation by being the underdogs, then the rest of the season should bode quite well for this team with a chip on their shoulder.

They’ll be probable underdogs again next week as Kentucky returns home for a date with the mighty Florida Gators. You can’t mention the Gators anymore without referencing their thirty-year winning streak against the Wildcats. I predicted in the preseason that NO ONE BEATS THE KENTUCKY WILDCATS 31 YEARS IN A ROW! Despite UK’s rather inconsistent play this year, I’m sticking to my guns. On a magical night in the commonwealth, it’ll be UK 17—Florida 14, as long-suffering Wildcat fans storm Kroger Field. I’ll be there. Will you?

John Huang is a columnist for Nolan Group Media and special contributor to Bluegrass Sports Nation. If you enjoy his UK Sports coverage, you can read more at Huangswhinings.com or follow him on Twitter @KYHuangs.