Cats Beat the Razorbacks in Rupp 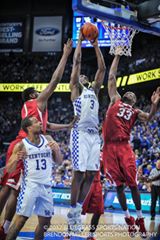 Bam Adebayo with putback vs Arkansas. – Photo by Brendon Miller

De’Aaron Fox poured in a career high 27 pts. Saturday night to lead the number six ranked Kentucky Wildcats over the Arkansas Razorbacks.  Four other players from Kentucky scored in double digits in what turned out to be a physical night. “De’Aaron Fox is ridiculous,” Kentucky coach John Calipari said. “He’s been doing extra work. He’s been coming to practice early, not by choice, and he has really been working and it showed in the game.”

This was Malik Monk’s first game against the home state team who recruited him since he was in the 9th grade.   Arkansas coach Mike Anderson said, “This is not Arkansas versus Malik Monk. Monk is a hell of a player. We know that. I don’t think I would have recruited him since the ninth grade if I didn’t think he was a hell of a player, so let’s get past that. This is Arkansas versus Kentucky.”  Monk began the night with the games first points off of a jumper and then went down court and got the steal and the assist to Fox.

Two quick fouls by Gabriel brought Willis off the bench to the four spot arguably Kentucky’s weakest spot in it’s lineup.  Willis showed no weakness and at one point was 5-5 from the field including 3-3 from the 3-point line. Willis ended up with 15 points, 5 rebounds, and 2 blocked shots shooting 6-8 on the night.

After the break, Kentucky slowly pulled away from Arkansas in a very heated second half.  Numerous times players were pulled away from one another.  At one point both head coaches were out near the foul line near the Kentucky bench, trying to calm their players down.  After a drive to the basket, Briscoe was stepped on by Barford.  Fox took issue with Barford.  There were some words exchanged and some shoving and both Fox and Barford ended up with offsetting technical fouls.  UK controlled the scoring in the second half 56-33 bringing the final score to 97-71. Arkansas Coach Mike Anderson admitted “We didn’t do our part in the second half.”  and they let the game get away from them.

UK interesting facts of the game:

Kentucky improves their SEC record to 3-0 and their overall record to 13-2.  Look for the cats to move up into the top 5 rankings this week.  Kentucky’s next opponent will be Vanderbilt in Nashville at 7:00 p.m.  The game will be televised on ESPN.