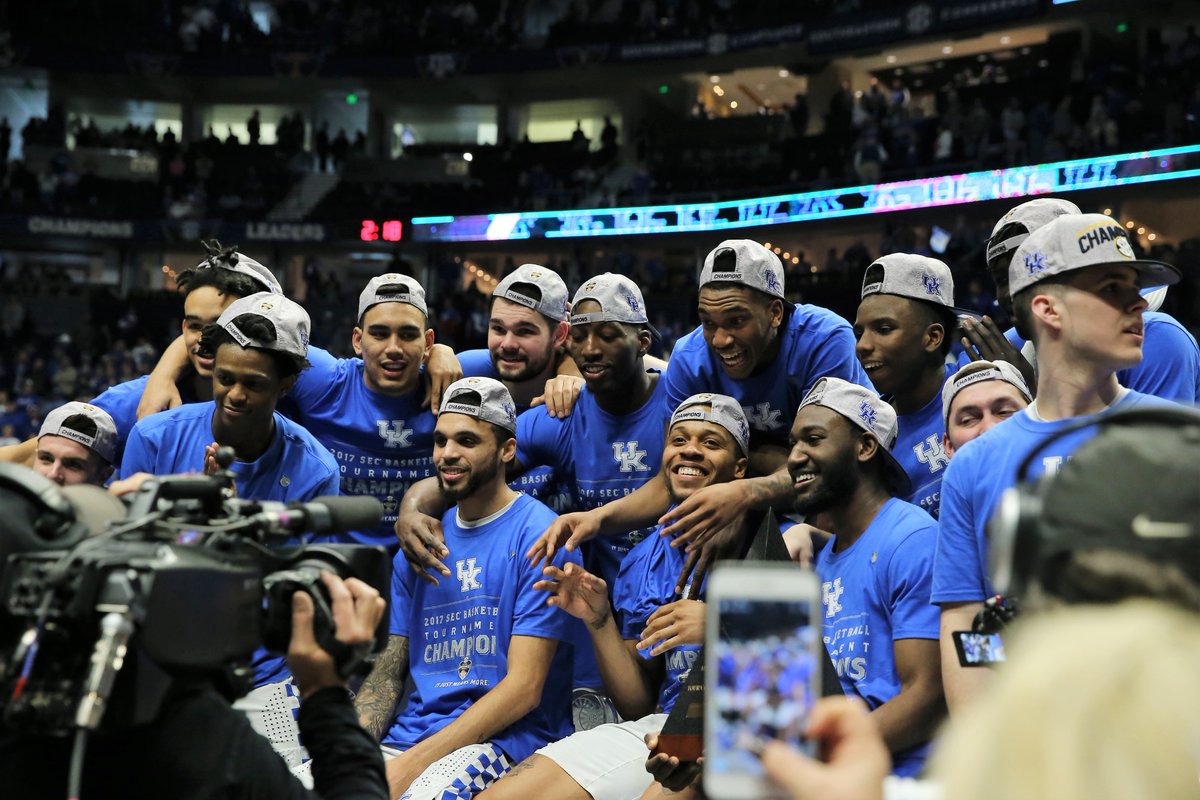 When Arkansas first joined the Southeastern Conference in the early nineties, the Razorbacks and Kentucky had some epic SEC Tournament games.  Both teams were usually ranked in the top ten of the nations top 25.  Both used a pressing defense and an offense that riled heavily on three-point shots.  Today’s championship matchup was a renewal of that old rivalry.  Arkansas has not been the team they once were, but it is still makes for a great atmosphere, here at the Bridgestone Arena in Nashville.

The biggest difference in today’s match-up is the crowd; Arkansas did not have their fan following that they had in the nineties; today’s game was ninety percent Blue.  It was the traditional tournament home game for the Wildcats.

Senior guard Dominique Hawkins was the story in the first half of the game.  With DeAaron Fox, Malik Monk and Bam Adebayo all sitting on the bench with two early fouls.  Hawkins was everywhere, on offense he scored nine points on 4 of 6 shooting and defensively he was a one man press, he was everywhere making tree steals in the first 20 minutes.  Fellow senior Derek Willis also came up big in the first half, bringing down eight rebounds and scoring five points.  Those seniors showed a determination of champions while leading Kentucky to 42-30 half time lead.

In the second half the Wildcats went up by as many as 19, but sloppy play along with missed shots allowed the Razorbacks to close the score to 73-64 with 1:30 to go in the game.  But then the game got out of control, after Monk hit a pair of free throws to put Kentucky up eleven.  That’s when the craziness began, first Arkansas’ Dusty Hannahs intentionally football blocked Hawkins in the head, which was rightly called a flagrant foul.  Two Hawkins free throws and a miss by Arkansas set up the next crazy play.  This time Fox was driving the lane and was passing off to Adebayo for the dunk, but Arkansas’ Moses Kingsley viciously knocked Fox to the floor on another flagrant foul.  This time Kingsley was ejected from the game.  Fox made the two free throws and pretty much game over.

The refs finally restored order and the Wildcats were on their way to their 30th SEC tournament championship.

The Wildcats were led in scoring by Fox who had 18 points; he was followed closely by Monk and Adebayo, who each had 17 points.  Willis and Adebayo, each had 9 rebounds to lead the Wildcats.

The real story was Dominique Hawkins who finished his senior year, by making the All-SEC tournament team; Hawkins was joined on the All-tournament team, by Bam Adebayo and DeAaron Fox.  Fox was named tournament MVP.