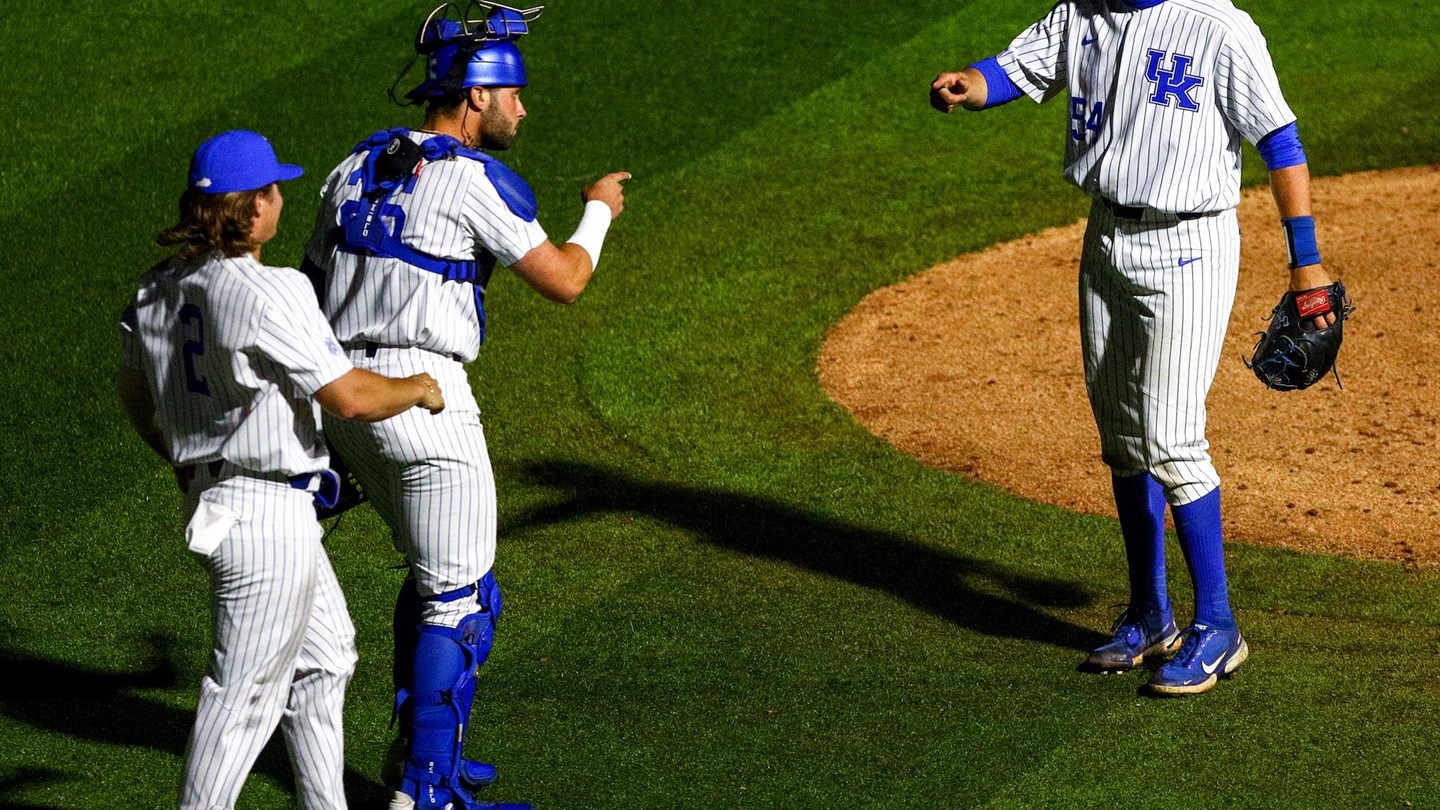 The Kentucky baseball team delivered a thrilling 7-5 victory over No. 8 Florida on Thursday night, getting a two-out, two-run single from John Rhodes in the bottom of the eighth to score a resume-building win in the series opener at Kentucky Proud Park. The sophomore lined a pitch into centerfield off Florida right-hander Jack Leftwich to score Chase Estep and Austin Schultz, the final punch in a game filled with drama over the final few innings.

The Cats (27-15, 11-11 SEC) picked up their third win over a top 10 opponent this season and second in six days, doing so in the same cardiac fashion that has become a staple of their season. After building a 5-0 lead through five innings the Cats saw Florida battle back and tie the game in the seventh with its own two-out rally, setting the stage for a wild ending.

The Gators (31-14, 13-9) put the first two men on in the eighth inning, bringing UK senior righty Daniel Harper into the game. Harper struck out a batter before allowing a single that loaded the bases with one out. The Fairway, Kansas native recorded another strikeout for the second out and then poured a perfect fastball at the knees in a full count to freeze Josh Rivera and end the inning without allowing a run.

Bouyed by the momentum Harper gave them the Cats proceeded to stage the winning rally in their half of the inning. Cam Hill, who had a two-run single earlier, opened the inning with a bunt single and advanced to second on a wild pitch. Estep flared a single to left and Hill was thrown out at home on a hard play at the plate that brought both dugouts onto the field. After Schultz beat out and infield hit and stole second, Rhodes hit the game-winner.

Bottom 5th – Coltyn Kessler singled to CF, advanced to second on a groundout and scored on Ritter’s two-out single to CF. UK 5, Florida 0.

Top 6th – Rivera doubled to open the inning, advanced to third on a groundout and scored on Young’s SAC fly to RF. UK 5, Florida 1.

Bottom 8th – Hill laid down a bunt single and moved to second on a wild pitch. Chase Estep singled to LF, Hill out at home, Estep moving up to second. Austin Schultz reached on an infield single and stole second. John Rhodes singled to CF, scoring Estep and Schultz. UK 7, Florida 5.

Kentucky will try to win the series on Friday night at Kentucky Proud Park. First pitch is set for 6:30 p.m. ET on the SEC Network Plus. The radio call will be on the UK Sports Network.