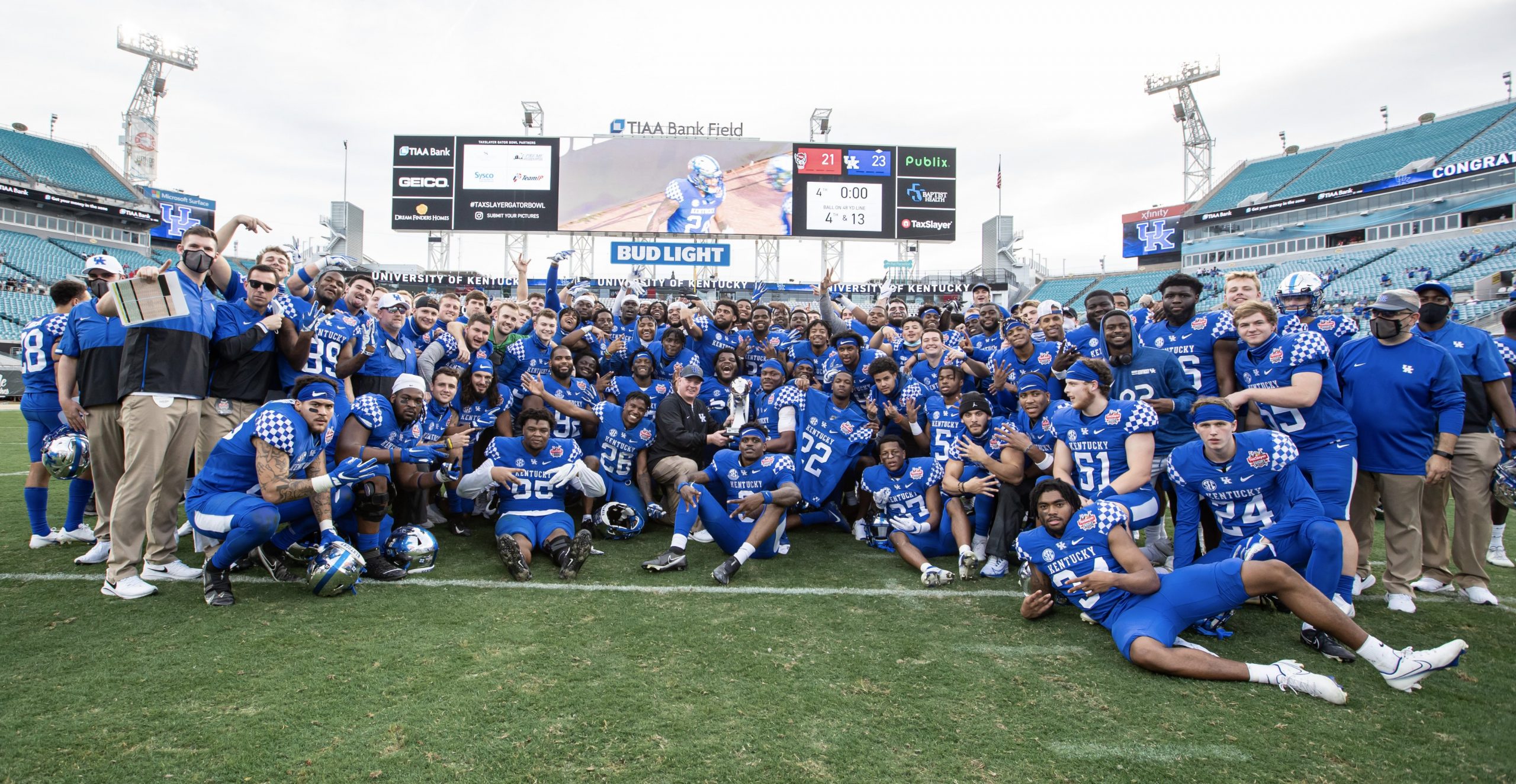 A long and unprecedented season didn’t come to an end without a dose of adversity for Kentucky.

The Wildcats (5-6) overcame a late surge by North Carolina State and held on for a 23-21 victory over the Wolfpack in the TaxSlayer Gator Bowl Saturday in Jacksonville.

The Wildcats used a solid running game, directed by recruiting coordinator and tight ends coach Vince Marrow and a makeshift offensive staff as Kentucky notched its third consecutive bowl victory in the past five years.

“That’s a great accomplishment,” Kentucky coach Mark Stoops said. “I appreciate all of our players and all of them wanted to be here and played a good game.”

The Kentucky coach also liked the way his team finished a season that featured a Southeastern Conference-only schedule during the regular season and restrictions and protocols in place because of the ongoing pandemic. The team’s motto was to simply finish.

“It’s very important (to finish with a win) and it’s been well-documented the investment (by the players) and it’s also been well-documented the toll it has taken on all players across the country,” Stoops said. “Players stepped up and wanted to do that, travel back and forth during their break after being mentally exhausted and still (laid) it on the line, all the way through to the fourth quarter and that says an awful lot. … It was an emotional year, but great to cap it off with a victory.”

Anchored by A.J. Rose and Chris Rodgriuez, Kentucky rushed for 281 yards and it was a 26-yard score by Rodriguez in the fourth quarter that gave the Wildcats the cushion they needed to hold on down the stretch. Rose finished with 148 yards rushing on 12 carries in what may have been his final performance with the Wildcats,

Rodriguez added 84 yards and provided a balance in the running attack. Rose said late offensive line coach John Schlarman provided a source of inspiration for the Wildcats as did teammate Chris Oats.

“He (Schlarman) was looking down and definitely inspired us all,” Rose said. “It was a great way to (end) if this was my last game. … the offensive line did a great job today.”

Kentucky’s defense was equally impressive and collected three interceptions, including one by Jamin Davis in the fourth quarter with the Wolfpack driving downfield for a potential go-ahead score. The pick by Davis led to the crucial score by Rodriguez.

“We just wanted to refuse to lose the game,” Davis said. “We just wanted to keep our backs against the wall and don’t let nobody take it from us. That’s been the same thing we’ve been preached to all year – if the ball’s in the air, it’s our ball – so that’s my main mindset is keep playing and ice the game.”

A downside for both teams were several unsportsmanlike penalties throughout the contest, including eight by the Wildcats.

“It was chippy throughout the whole game,” Rose said. “It was an emotional football game and both teams wanted to win. … We came out with a win and that’s all that matters.”

Stoops wasn’t happy with his team’s conduct at times and said the issue would be addressed in the future.

“Some of (those) unsportsmanlike penalties, I’ve got to get cleaned up,” he said. “That’s not us and we’re not going to accept that … we’ll get that addressed.”

Although chippy at times, Rose and the Wildcats were glad to get the win during an unprecedented and unpredictable season.

“It’s been a long year and a tough year,” Rose said. “We managed it and did a great job of keeping players safe and everyone else around us.”

Kentucky kicker Matt Ruffalo was perfect and connected on field goals of 25-, 26- and 20-yards in the contest, while North Carolina State misfired on two of its field goal attempts.