CATS Fall Short in Upset Bid of No.1 Gamecocks 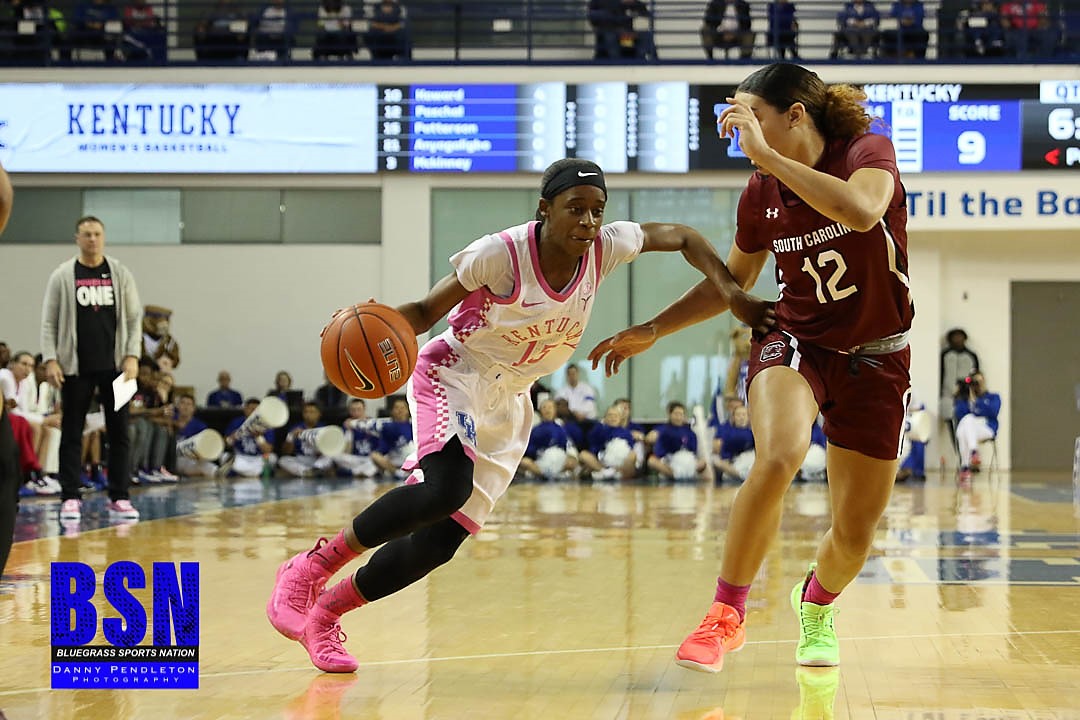 The No.14 ranked Kentucky Wildcats retuned home to Memorial Coliseum on Sunday afternoon as they played host to the nations No.1 ranked team, the visiting South Carolina Gamecocks.

On Sunday afternoon the No.14 ranked Kentucky Wildcats returned home to Lexington as they played host to SEC foe, the No.1 ranked South Carolina Gamecocks.

The Cats and Gamecocks met once earlier this season in Columbia, where South Carolina came away with the win in a big-time fashion, defeating the Cats 99-72.

In addition to welcoming the nations top-ranked team to town, Sunday’s matchup was also dedicated to breast cancer awareness and research as Kentucky wore an alternate white and pink uniform instead of the usual white and blue.

Kentucky faced no small task in the matchup, as the Gamecocks entered the matchup with a record of 25-1, earning the feat of the nation’s top ranked squad.

From the tip it was a back and forth battle between both squads, with each of them trying to gain the edge.

With Kentucky doing everything they could to hang around, after turning the ball over a costly 7 times, the Gamecocks pressure seemed to be to much as they exploded to take a 27-14 lead over the Cats at the end of the 1st period.

Combining the defensive intensity with some good offensive possessions, Kentucky was able to cut the South Carolina lead down to as much as just 3, but after a big answer in the final minutes by the Gamecocks the Cats went into the half facing a 10 point deficit, 40-30.

Kentucky was led in scoring in the first 20 minutes by National Player of the Year candidate, Sophomore guard Rhyne Howard, who tallied 12 points, 6 rebounds, and 2 assists in the first two periods.

Coming out of the break, both teams continued the fight, with each of them going on runs of their own.

After going back and forth for much of the quarter, Kentucky seemed to be struggling on the offensive end as the cats shot a staggering 33% from the field, while the Gamecocks shot 67% from the field in the period.

At the end of the 3rd with the final minutes to play still on deck, Kentucky trailed South Carolina 43-59.

While Kentucky was not to be put away without a fight, the Gamecocks lead was just too much to overcome.

Kentucky came out fired up in the 4th, going on a little run of their own and bringing the crowd back to life, but it seemed to be too little too late.

It was a valiant effort by the Wildcats, but South Carolina’s explosive offense turned into aggressive defense, and even with a packed house of the Big Blue Nation behind them, it was all too much for the Cats to handle.

Kentucky was again led in scoring by Rhyne Howard, who finished the day with another double-double, tallying 24 points, 11 rebounds, and 3 assists, all with a splint on her left hand from a lingering hand fracture she suffered earlier in the season.

The Wildcats will take the floor again on Thursday at 7 pm in Memorial Coliseum as they play host to the visiting Georgia Bulldogs.