CATS Find Shooting Touch, Use Big 2nd Half to Win at LSU 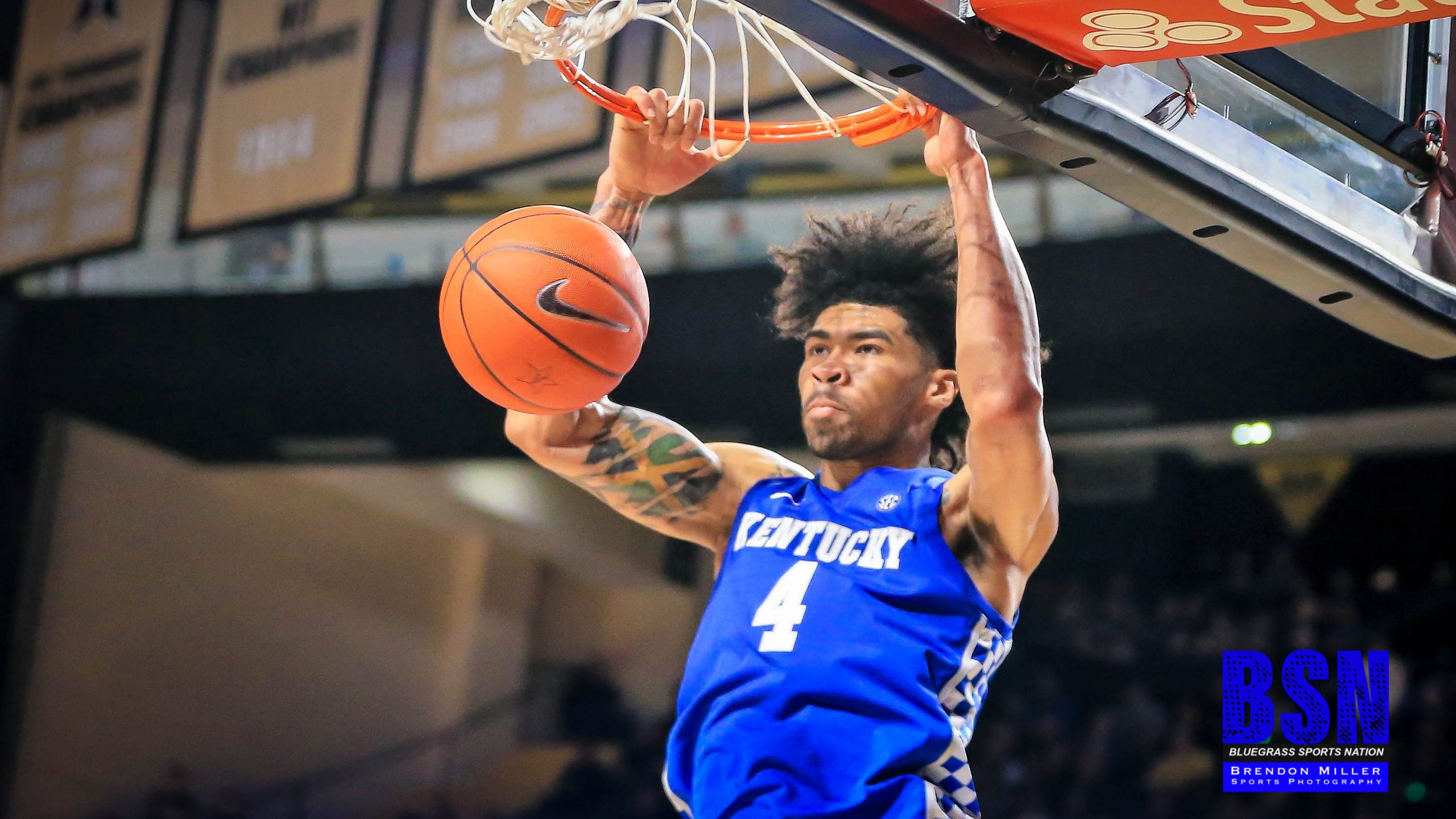 Nick Richards with the dunk for 2 of this 13 on the night - Photo by Brendon D. Miller - Bluegrass Sports Nation

Kentucky snapped out of a shooting slump and remained alone in first place in the Southeastern Conference standings with a 79-76 victory over LSU Tuesday night in Baton Rouge.

The 10th-ranked Wildcats 21-5, 11-2 SEC) made their first seven 3-pointers of the second half and built a 15-point lead to hold off the Tigers’ late surge down the stretch for their fifth consecutive victory. Kentucky increased its conference lead to two games over the Tigers and remain a game ahead of Auburn, which plays at Georgia Wednesday night. The Wildcats host Florida Saturday night.

“In the second half, we made the shots, which is why we went up by (15) points,” Kentucky coach John Calipari said. “You’ve got to give them credit. They didn’t stop and they’ve done this all year to everybody.”

The Tigers (18-8, 9-4) defeated Kentucky 73-71 on a tip-in at the buzzer a year ago in Lexington, but couldn’t keep pace of the Wildcats this time, especially in the second half. After winning its first eight conference games, LSU has lost four of its past six games.

Immanuel Quickley placed five players in double figures with 21 points to go along with four rebounds and a team-high six assists. Quickley made 7-of-12 shots from the field, including a pair of 3-pointers for Kentucky, which made just two treys on 22 attempts in a 67-62 win over Ole Miss last Saturday at Rupp Arena.

“This team is tough,” Quickley said. “No matter what happens in the second half, we’ve been a good second-half team all year. That’s just a credit to everybody’s toughness and all of the drills we do in practice — the toughness drills … and a credit to all of the hard work we’ve been doing.”

Kentucky made just two shots on their first 12 attempts from behind the arc in the first half, but broke out the slump with an impressive showing in the second half against the Tigers. Nate Sestina made three treys, scored 11 points, grabbed eight rebounds and added a block. Sestina’s back-to-back 3-pointers gave the Wildcats their biggest lead of the game at 67-52 with five minutes remaining.

Sestina credited his success to a book he’s been reading entitled “10-Minute Toughness” written by Jason Selk, recommended by Calipari and trusted his training.

“I’ve been believing in that and trusting that it’s going to come to fruition eventually and I guess tonight it did,” Sestina said. “(The game) was a big-time exhale for me, because it’s been frustrating because I haven’t been able to do anything defensively, either. For me, it’s not just about getting a bucket or anything like that. I’ve got to do something defensibly to help my team and I have been struggling with that as well. Tonight, everything came to fruition.”

“I’ve been praying for him,” Calipari said. “I just wanted him to break through and I want all of (our) kids to play well.”

Tyrese Maxey added 14 points, followed by Nick Richards with 13 points. Richards added six rebounds and collected six of Kentucky’s 11 blocked shots in the contest. Ashton Hagans added 11 points and four assists. Hagans sat out the final 6:53 after falling to the floor while chasing down a loose ball.

Quickley hopes Hagans can bounce back in a hurry.

“If he doesn’t play (next game), that’s a big piece we’ll be missing obviously,” Quickley said. “He’s the defensive player of the year in the SEC and I don’t think I would be excited about anything with Ashton being (out of the lineup).

Keith Taylor is the sports editor for Kentucky Today. Reach him at [email protected] or twitter @keithtaylor21.