CATS Grind Out a SEC Win in Columbia 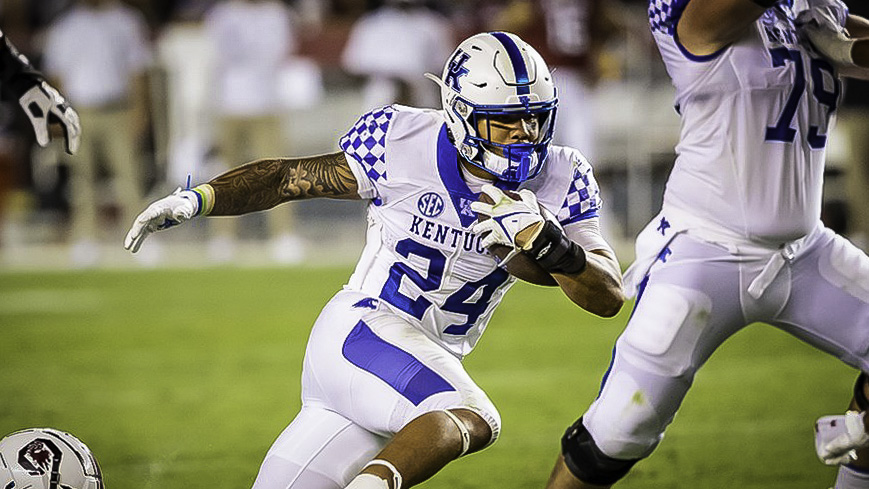 Chris Rodriguez rushed for 144 yards and the Kentucky defense made a number of crucial stops as the Cats topped South Carolina 16-10 on Saturday night at Williams-Brice Stadium.

Rodriguez led the charge on the ground as the Cats rushed 44 times for 230 yards in the game. Kavosiey Smoke had 50 yards and a touchdown on nine carries and quarterback Will Levis carried five times for 30 yards.

Levis connected on 15 of 22 through the air for 102 yards in the game. Wan’Dale Robinson was his favorite target on this night, catching seven passes for 65 yards.

Kentucky (4-0, 2-0 SEC) got a big defensive effort in the game. The Cats held the Gamecocks to 216 total yards and just 58 yards on the ground. UK had five tackles for loss, including a pair of sacks, in the contest. DeAndre Square led the defensive charge with eight tackles, while Carrington Valentine had four tackles, including a sack. J.J. Weaver accounted for the other UK sack in the game.

Kentucky took the opening kickoff and used the ground game to march down the field. Rodriguez carried four times for 35 yards and Kavosiey Smoke rushed twice for 23 yards and a 15-yard touchdown to get the Cats on the board. Matt Ruffolo added the point after and Kentucky led 7-0 with 8:27 left in the first quarter. Kentucky converted three third-down conversions on the drive as well, and Levis was 3-4 through the air.

The next three possessions would result in punts and Kentucky would hold a 7-0 lead after 15 minutes of play.

In the second period, Kentucky punted on its first possession and South Carolina took over near midfield. But the Cats forced a three-and-out, ending any sort of threat.

Kentucky punted on its next possession and the Gamecocks again took possession near midfield. After getting to a third-and-one, the UK defense stood tall on third down, stuffing a Kevin Harris rush up the middle. Then on fourth down, South Carolina went for it, but Harris was stopped short again and the Cats took over in good field position.

But after making a first down, the Cats took a shot downfield but Levis was intercepted by Jaylan Foster at the South Carolina one yard line.

South Carolina would make a pair of first downs on its next possession before being forced to punt yet again. Kentucky took over at its own 18 yard line.

The Cats would get a first down on a Levis quarterback sneak, then another first down on a pass interference penalty, getting into South Carolina territory in the process. UK benefitted from a defensive holding penalty, on a play where Levis was apparently sacked, taking the ball to the 29 yard line. But UK was penalized for holding on the next play.

UK would get into field goal range just before the half and, on the final play of the first half, Ruffolo drilled a 43-yard field goal to give the Cats a 10-0 advantage at the break.

On the first drive of the second half, South Carolina mounted its first serious scoring threat of the game. The Gamecocks got into UK territory, riding the hot arm of quarterback Luke Doty, who eventually connected with Jalen Brooks on a five-yard touchdown pass. Parker White added the PAT and the UK lead was cut to 10-7 with 10:52 left in the third period.

Kentucky would answer with a significant drive of its own. Levis connected with Wan’Dale Robinson four times on the drive as the Cats got inside the South Carolina five yard line. But Kentucky could not punch it in but the Cats did get a 21-yard field goal from Ruffolo to extend the lead to 13-7 with 3:43 left in the third quarter.

The Gamecocks continued the drive and got inside the UK 30. But on fourth and five from the 25, Doty’s pass was knocked away by Tyrell Ajian to stop the drive.

UK took over at their own 25 with 13:33 to play. The Cats were moving the ball and got near midfield before Ali fumbled again and South Carolina recovered at the UK 45 with 11:32 to play.

Once again, Kentucky’s defense stood tall on the ensuing drive. Marquan McCall caught Juju McDowell in the backfield on first down for a three-yard loss. After a pair of scrambles by Doty, the Gamecocks went for it on fourth down, but Doty’s pass for Dakereon Joyner was broken up by Jalen Geiger, ending the drive at the UK 40.

On the ensuing possession, Kentucky went back to the ground game with Rodriguez. He carried five straight times, for 43 yards before giving way to Smoke, who carried the ball on the next two plays as the Cats got into the red zone. On third and six, Levis connected with Ali to get the ball to the nine but it was short of the first down. Ruffolo came on and made his third field goal of the night, a 27-yarder, to extend the UK lead to 16-7 with 4:26 to play.

South Carolina went to the air again on its next possession. Doty got the Gamecocks into Kentucky territory but again, the UK defense stood tall. UK held South Carolina to a 54-yard White field goal, which he made, cutting the UK lead to 16-10 with 2:31 to play.

Kentucky turned back to the ground on the ensuing possession and was able to run the clock out and preserve the win.

Kentucky returns to action on Saturday, hosting Florida at Kroger Field. Kickoff will be at either 6 or 7 ET and the television network is to be determined.