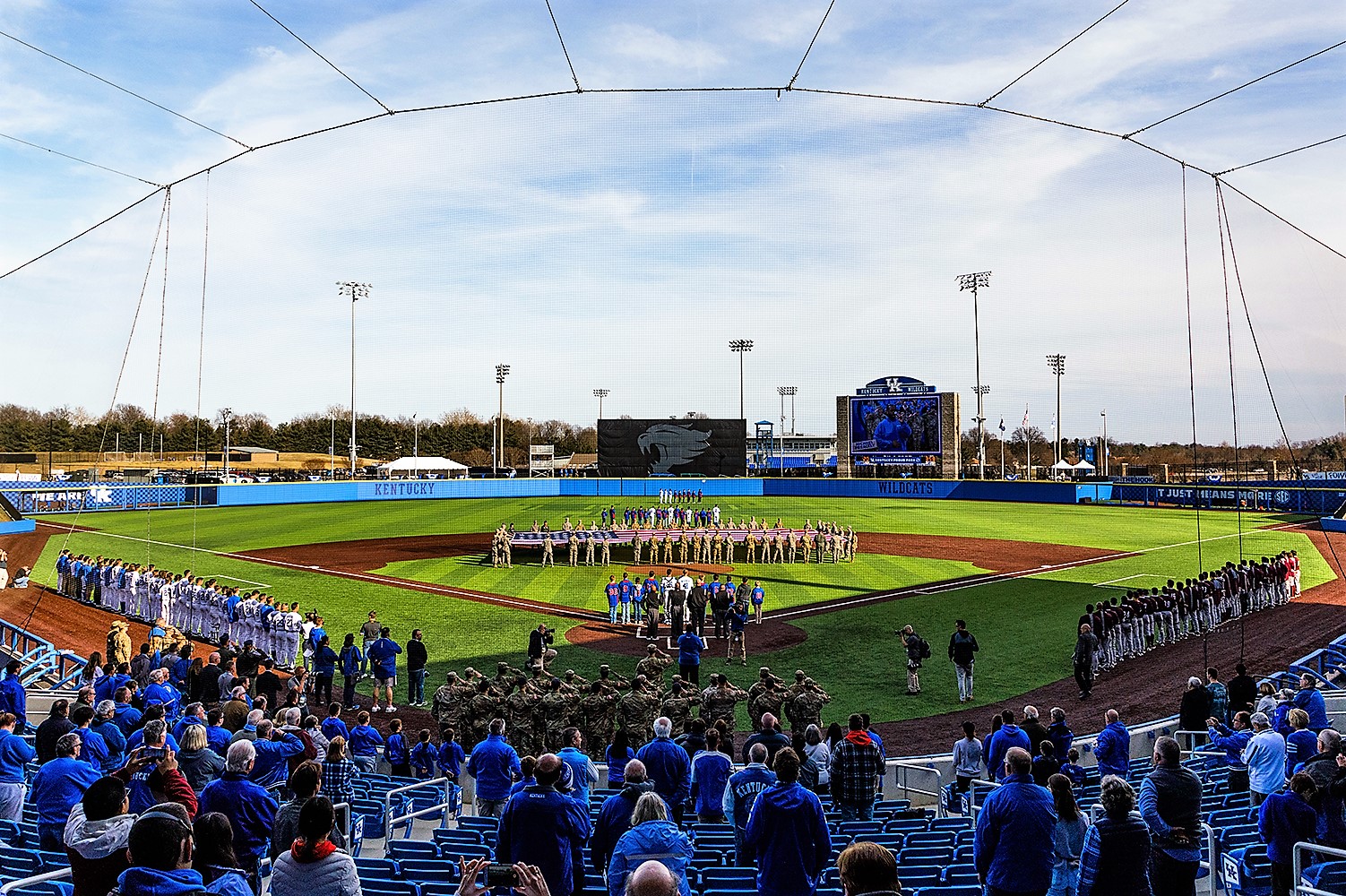 The Kentucky Wildcats came into todays matchup again the Eastern Kentucky Colonels with a 3-3 record. The Wildcats have had a tough previous series against #3 Texas Tech getting beat 4-7, 7-10, and 4-19. The Colonels come into the matchup sitting 6-2 and on a four-game winning streak. Today is Opening day for the Wildcats and their first game in the insanely nice new stadium. The turnout was good for today’s game. On the mound for Kentucky was Grant Macciocchi and for the Colonels was Ferris.

The first couple innings went by quite fast. In the top of the first, Ryan Kerr hit a lead off single. The next batter popped up to the catcher to get the first out of the inning. The third batter in the lineup hit into a double play 6-4-3 to end the top of the first. Kentucky started the first inning three up, three down. The top of the second inning was three up, three down for the colonels. In the bottom of the second inning Dalton Reed hit a double between left field and center. Kessler gets an infield base hit putting runners on first and third for the Cats. Cam Hill hits a hard ground ball to second base and the second baseman made a bad throw to first, scoring Reed, giving the Cats a 1-0 lead to end the second inning.

In the third inning both teams were held scoreless. In the top of the fourth inning Colonels went three up, three down. In the bottom of the fourth the Cats stranded two runners on base. The top of the fifth the colonels remained scoreless again. In the bottom of the fifth with two outs, Ryan Shinn singled. Ferris tried to pick up Shinn and made a bad throw advancing him to second base. TJ Collet then hit a two-run homerun to left field putting the Cats up 3-0. Jaren Shelby then walks and steals second base. Reed walks, putting runners on first and second base. Shelby steals third base and then steals home on a pickoff move to first putting the Cats up 4-0.

In the top of the sixth inning, the Colonels finally got on the board off an initial walk for Marcus Hill and then stealing second base and then on a passed ball stealing third base and the Kerr hits a ground ball to short stop allowing Hill to score to put the score to 4-1. The Colonels got bases loaded in the sixth inning with two outs but could not manage to put any more runs on the board.

In the bottom of the sixth inning, Lewis leads off with a walk and then stealing second base. Breydon Daniel walks putting runners on first and second. EKU brings in a new pitcher Darien Williams. Lewis and Daniel both steal to advance the runners to second and third base. Ryan Shinn walks to load the bases. Shelby hits a routine fly ball to right field, but was dropped by the right fielder, scoring two runs and leaving runners on first and third base. Shinn later scores on a passed ball putting the Wildcats up 7-1.

In the top of the ninth inning, the Colonels got on the board with a single from Thomason scoring two runs putting the score to 7-3. The wildcats got out of the inning striking out Daniel Harris swinging. This ended the game, picking up the Cats fourth win of the season.

The Cats were led by Alex Rodriguez going 2-2, TJ Collet 1-5 with a two-run homerun, and Dalton Reed going 1-3. Grant Macciocchi picked up his first win of the season pitching 5.2 innings, allowing one earned run, striking out six, only walking one batter, and pitching 69 pitches. The Wildcats look to keep rolling tomorrow vs Northern Kentucky University with the starting pitch at 4 PM. Everyone get out this season and try to support these Wildcats, general admission is only $3, and are playing in an insanely nice stadium. The Wildcats are on an 11 game home stretch with warmer weather approaching the bluegrass.