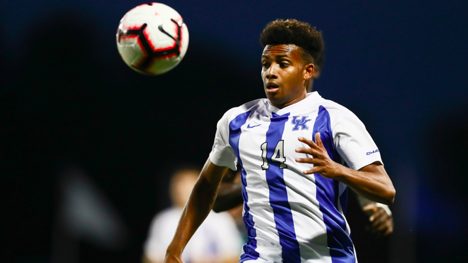 JOHNSON CITY, Tenn. – After a week-long break since its last outing, No. 19 Kentucky picked up right where it left off with a 1-0 victory over ETSU in the Wildcats’ fourth consecutive shutout and first road win of the season.

The Cats advance to 6-1-2 overall with a 1-0-1 tally in Conference USA, posting a 7-0 goal differential in wins over Florida Atlantic, Bowling Green and Coastal Carolina in addition to ETSU. The Buccaneers, untried in Southern Conference play, fall to 3-4-2 on the season.

Saturday’s game winner was scored by sophomore midfielder Brock Lindow, marking the Toronto native’s first goal of the season. Lindow received the ball from forward Daniel Evans just outside the box in the 54th minute and made a move to create enough space between him and his defender to fire a rocket into the net’s upper-right corner. Evans’ third assist of his sophomore campaign ties Kalil ElMedkhar for the most on the team this season.

Kentucky’s league-leading fifth overall clean sheet came by way of one save from Enrique Facusse, who headed the nation with 14 shutouts in 2018. Kentucky attempted eight total shots on Saturday, allowing seven from ETSU.

UK is set to finish off the second of back-to-back road tilts versus its most highly ranked opponent in No. 8 Indiana before resuming C-USA competition four days later. The Hoosiers, currently a 6-1-2 (2-0 Big Ten Conference) team with Penn State looming on Sunday, welcome the Cats to Bill Armstrong Stadium seeking revenge for a decisive 3-0 loss in Lexington last season.

Kentucky will kick off with Indiana on Wednesday at 7 p.m. ET, airing live on FS1.