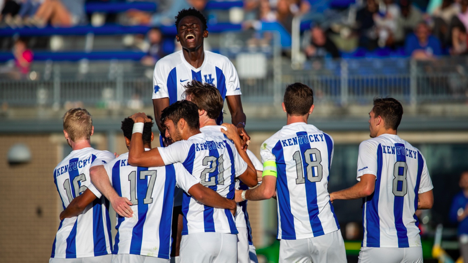 LEXINGTON, Ky. – After a full week without competition, No. 16 Kentucky proved to be firing on all cylinders in its return to the pitch with a 4-0 rout of South Carolina on Sunday afternoon at Wendell & Vickie Bell Soccer Complex.

UK freshman Eythor Bjorgolfsson scored the only goal of the first half in the 19th minute, adding to the first two of his career netted in the Cats’ 2-1 double-overtime win at Old Dominion on Oct. 19. Redshirt freshman John Michael Bandy sparked the play with a free kick, recording his third assist of the season.

Ten minutes into the second half, sophomore Daniel Evans padded the Kentucky lead thanks to a perfectly placed pass from Kalil ElMedkhar inside the box. The goal was Evans’ fifth, while ElMedkhar notched his fifth assist.

In the 72nd minute, redshirt freshman Colin Innes became the 12th different UK player to record a goal this season with the first of his career. ElMedkhar began the play with a through ball to Elijah Borneo, who opted to bypass a shot attempt of his own to find a wide-open Innes just inside the box.

Evans put away the Gamecocks for good with an easy breakaway goal set up by a pass from Clay Holstad and a collision between South Carolina goalkeeper Nick Brady and defender Frano Buhovac. Evans’ team-best sixth goal of the season places him among the ranks of Bjorgolfsson and Aimé Mabika as the only Cats to record a brace in their 2019 campaigns.

Kentucky will polish off nonconference play on Wednesday at The Bell, taking on Wright State (7-5-2, 3-3 Horizon League) at 7 p.m. ET.