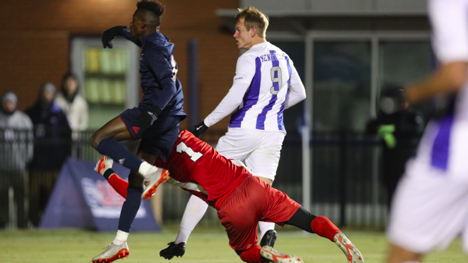 No. 4 seed Kentucky to face No. 1 seed Marshall on Friday

NORFOLK, Va. – No. 15 Kentucky opened 2019 Conference USA Championship competition with a 2-0 quarterfinal win over Florida Atlantic thanks to late-game heroics from a pair of freshmen on Wednesday.

With the fourth-seeded Wildcats and fifth-seeded Owls locked in a scoreless stalemate for nearly 89 minutes, first-year forward Eythor Bjorgolfsson received a pass from Marcel Meinzer by way of Brock Lindow at the edge of the box, where he beat FAU goalkeeper Hagay Jalon off the dribble and secured the game winner in the back of the net.

Fourteen seconds later, fellow freshman Jansen Wilson iced the match with his third goal of the season off a charitable pass out of pressure from Bjorgolfsson.

The game winner marked Bjorgolfsson’s second at ODU Soccer Complex, as well as his third goal at the stadium out of his four on the season. On Oct. 19, the 6-foot-2 Norwegian propelled Kentucky to a 2-1 come-from-behind double-overtime victory versus the Old Dominion Monarchs with an equalizer in the 70th minute and the contest’s golden goal in the 107th. Meinzer was credited with an assist on each of Bjorgolfsson’s three goals in Norfolk.

Kentucky led all four of Wednesday’s quarterfinal participants with 17 shots, including 11 in the first half. Second-team All-C-USA goalkeeper Enrique Facusse recorded five saves, equaling a season high chronicled in his last trip to ODU Soccer Complex. Facusse and the UK defense, anchored by C-USA Player of the Year Aimé Mabika, picked up a conference-best ninth shutout of the season.

With the win, the Cats advance to Friday’s semifinal round for a 4:30 p.m. ET kickoff with top-seeded Marshall, the nation’s 15th-ranked unit. Kentucky fell 1-0 to the Thundering Herd on Nov. 3 in Huntington, W.Va.