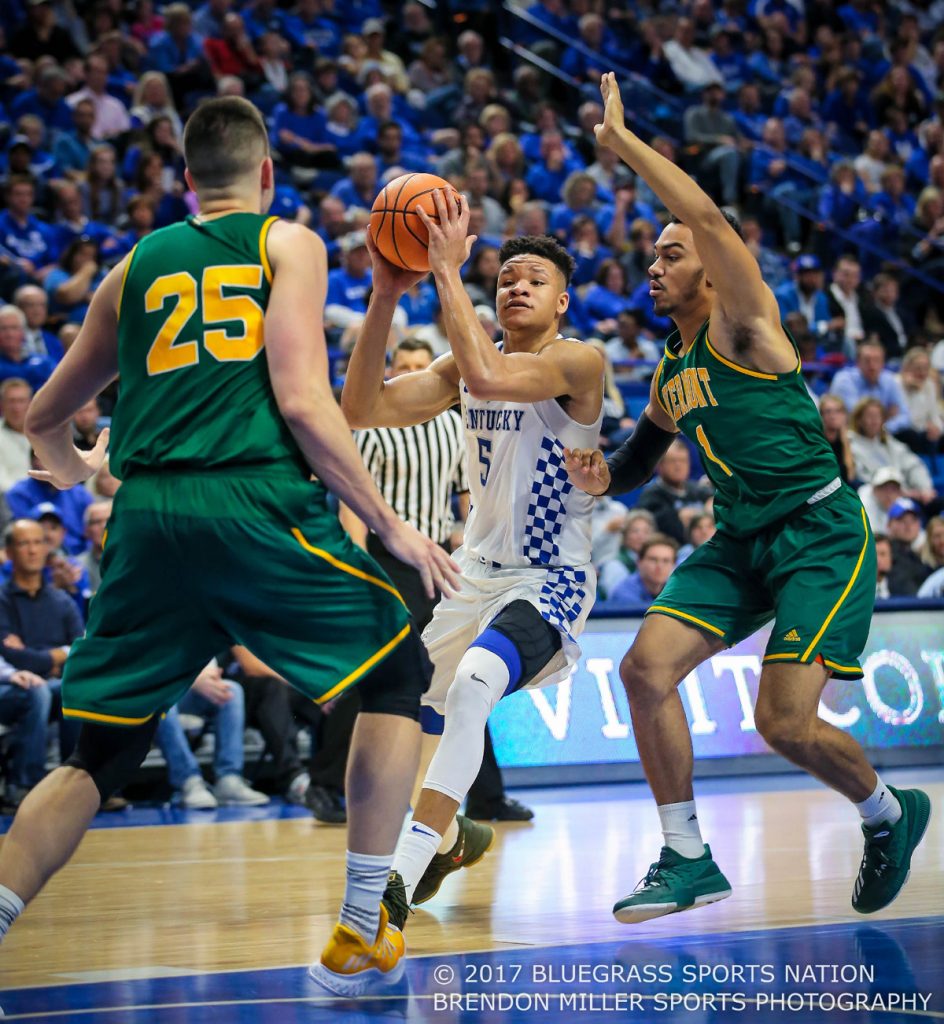 By Ricky Blair – Lexington, KY – The Kentucky Wildcats hang on for a 73-69 win over Vermont in a hard fought game at Rupp Arena.  The Vermont Catamounts were not your typical early season patsy game.  This veteran squad was 29-6 last season with a 16-0 record in the American East Conference on their way to an NCAA tournament bid.  The Catamounts had not lost a regular season game since last December.  Vermont also had six senior members, while the young Wildcats are without a senior on this year’s team.

So going into the game there was an expectation that this game may come down to the wire, which is exactly what happened.  Twice during the final 17 seconds, Vermont had a chance to tie the game with a three-pointer, but the young Wildcats played sound defense and forced difficult shots.

Freshman forward PJ Washington was the star of the game for Kentucky.  He led the team in scoring with 17 points and he also was the team leader in rebounds with 10.  But more importantly it was Washington who the Wildcats looked for on the low post for most of the second half in an attempt to hang on to their slim lead.  He was a bull inside and Vermont did not have an answer.  The Wildcats had a balanced scoring attack with four players ending up in double digits.  Following Washington were fellow freshmen Hamidou Diallo with 16 points, Quade Green finished with 15 points and Kevin Knox chipped in 11 points despite struggling from the field.  Knox only connected on 3 of his 10 field goal attempts this afternoon.

Kentucky started this game with a mission to play better.  The Wildcats took an early 11-4 lead, but Vermont was unfazed and fought back to tie the game at 13-13.  An incredible play by point-guard Shai Gilgeous-Alexander got the Wildcats going again.  Gilgeous-Alexander made a layup while being intentionally fouled by Vermont’s Anthony Lamb.  The additional two free-throws gave Kentucky a 23-16 lead.  Kentucky went up by as many as 12 points and coasted to a 40-28 halftime advantage.  Freshman guard Hamidou Diallo led the Wildcats in scoring in the first half with 13 points and was followed closely by fellow freshman PJ Washington who had 9 points and 5 rebounds in the first 20 minutes.

During the second half the Wildcats never trailed, but Vermont did make a strong run as they gradually cut into the lead and had those last few chances to send the game into overtime.  This was the first ever game between Kentucky and Vermont.

The Wildcats first two games have shown they are not ready for prime time at this stage of the season, but that is exactly what they are headed for as they head to Chicago to take on the #4 ranked Kansas Jayhawks on Tuesday night.

Kentucky is now 2-0 on the season and hold a #5 national ranking.