CATS Show Signs of Breakthrough, But ‘Let Go of Rope’ in Loss to Heels 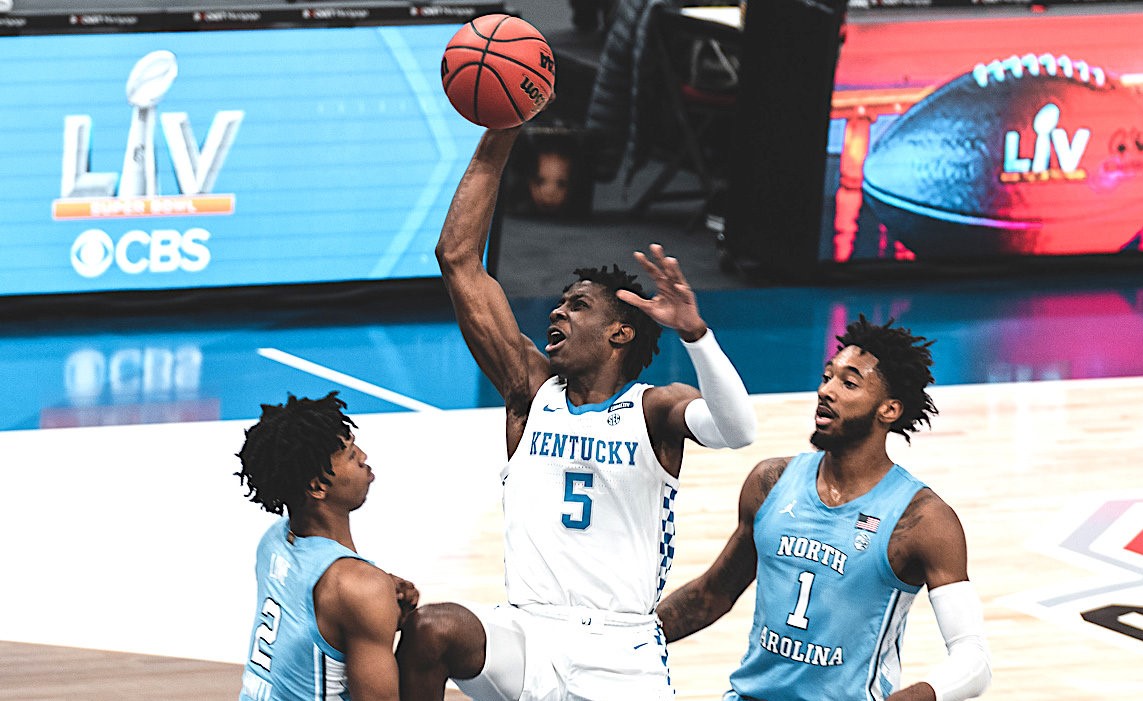 The last time Kentucky lost five straight games, Adolph Rupp was still coaching high school basketball and four years away from making his mark as coach of the Wildcats.

For the first time since the 1926-27 season, Kentucky lost for the fifth straight time,  dropping a 75-63 setback to North Carolina in the CBS Sports Classic at Rocket Mortgage Arena in Cleveland Saturday. The loss was the fourth double-digit setback for the Wildcats in six games this season.

Coming off a 64-63 loss to Notre Dame, Kentucky coach John Calipari had high hopes for his squad based on a second-half performance against the Irish. Flashes of a breakthrough appeared in the first half against North Carolina, especially after building an early 19-8 lead. Kentucky led 38-34 at the half, but a seven-minute scoring drought coupled with poor play during the final 10 minutes allowed the Tar Heels to pull away down the stretch.

Kentucky scored just 25 points in the second half and “let go of the rope.”

Kentucky veteran Olivier Sarr, along with newcomers Lance Ware, Terrence Clarke and Isaiah Jackson each fouled out, leaving the Wildcat shorthanded, especially in the second half. Despite the lack of a post presence late in the contest, Kentucky held a 42-38 edge in rebounding, with guards BJ Boston, Davion Mintz, Clarke and Devin Askew combining for 22 rebounds.

“We outbound them and you would think (you would win),” Calipari said. “Our guards rebounded the crap out of the ball. Again, we had some immaturity and stuff like that just keeps creeping in (on us).”

Calipari cited his team’s ability to fight,  win 50-50 balls and overall youth and overall inexperience as a big reason the Wildcats were unable to build on their first-half showing against the Tar Heels.

“We need to be great at those things to be able to win and we’re not,” Calipari said. “A lot of times, guys aren’t listening. We are capable of doing this and we’re showing signs, it’s just that we’re not (getting the breaks). When you make errors, teams like we are playing — veteran teams — teams that have been through it, they make you pay and North Carolina made us pay.”

Kentucky sophomore Keion Brooks, who is yet to play this season, spoke for his teammates and said the five-game slide has been tough for the Wildcats to endure and “stuff that’s really, really hard for them … to take responsibility and own up their performance.”

“I was proud that he would step up and even face the music and he didn’t even play,” Calipari said.

Brooks said the Wildcats aren’t giving up in the season and added the current losing streak has been tough on the team and the coaching staff.

“We’ve got to keep sticking with it,” he said. “It’s a long season and we’ve got to continue believing in our coaching staff and believe in ourselves. Five straight losses just sucks, but with the way we are playing right now, we don’t deserve to win.”

Calipari agreed and said the Wildcats have to develop more fight to be able to generate success on the court.

“We’ve just got to keep on it (fighting) and keep demanding it,” he said. “Our will has got to be stronger than their will not to (fight). Instead of worrying about how you’re playing, do the things that don’t take talent and don’t take skill — all of that kind of stuff. Be great at that and then the other stuff happens. … We’ve got work to do and we’re going to have to get this thing right.”