Cats take it down to the final drive again… 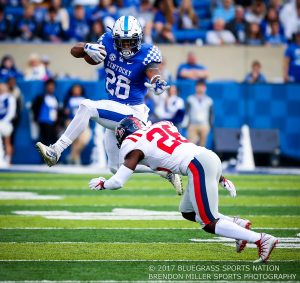 Coming off the emotional win over Tennessee last week, the Kentucky Wildcats played host to the Ole Miss Rebels for the next to last home game of the season last night at Kroger Field.  Ole Miss was coming off an emotional game as well, losing to Arkansas on a last second play just one week before.  Earlier this season Ole Miss lost it’s starting quarterback to injury and coming into the game, had the worst rushing defense in the SEC, both of which Kentucky fans had hoped would play to the favor of their beloved Wildcats.

I asked a friend on Friday, “How do you think the (UK) football team will do tomorrow?”  His reply was this, “They’ll play well, they’ll but they won’t pull away and the other team will have a chance to win the game in the final seconds.”  That seems to be the M.O. of this year’s Kentucky team.  They can play with anyone in the country, but anyone in the country can play with them.  Putting a team away seems to be their weak point, and Saturday night was no different.

Up by 3 at the half, Kentucky came out of the locker room, took the ball to start the second half and immediately drove 80 yards down the field on 5 plays to score and push their lead to 10 (27-17).  Just after that score, the Cats offense managed 14 total yards on their next four drives.   Ole Miss on the other hand seemed to find another gear on their offense and scored a Field Goal, a Touchdown, and a Field Goal in a total of 7 minutes and 29 seconds, to take the lead 30-27.  Ole Miss punted the ball back to Kentucky with 8:36 to go in the game.

All Kentucky’s defense had to do was stop the Rebels and they would put another one in the win column.  Sound familiar?  Remember last week against Tennessee?  Remember week 5 against Eastern Michigan?  How about week 4 against…Florida? And even week 1 at Southern Miss?  In each and every game that I just listed, Kentucky’s defense allowed those teams to hang around to make the end of the game interesting to say the least.  Last night was no different.

With only 2:14 left to play in the game, UK’s kickoff only traveled 36 yards and Ole Miss made the fair catch on their 29 yard line.  On the next 9 plays, Ole Miss drove down to the Kentucky 7 yard line where quarterback Jordan Ta’amu’s run to the left saw the ball bounce free into the hands of a Kentucky defender seemingly ending the game with less than 20 seconds to play.  Kroger Field was ecstatic.  The 55,665 in attendance just knew that win number 7 was in the books.  However, an official review showed Ta’amu was down just before the ball came lose.  Ole Miss would get the ball back on the UK 7 yard line with a chance to win the game.

On 1st and goal, Ole Miss clocked the football to stop the clock.  With 15 seconds left in the game and 2nd and goal, Kentucky’s defense held strong and forced the incomplete pass.  On 3rd and goal though, Ole Miss would find D.K. Metcalf for the 7 yard touchdown in the corner of the end zone for the touchdown to break the hearts of Kentucky fans and put the Rebels up 37-30 with only 5 seconds on the clock.  Kentucky would take the kickoff and try the old hook and ladder lateral play to no avail as the clock expired giving Ole Miss the win.

Kentucky would fall to 6-3 on the year while Ole Miss improves to 4-5.  With only three games left in the season, Kentucky will travel to Nashville next week to take on Vanderbilt (4:00 p.m.), then travel to Athen, Georgia to face the Bulldogs, and wrap up the season at home against the Louisville Cardinals on the Saturday after Thanksgiving.

Interesting stats of the game: