Junior second baseman Alex Martens went 3-for-4 at the plate and drove in five runs to lead the No. 14 Kentucky Wildcats to an 11-1 win over Virginia Tech on Sunday afternoon and book UK’s ticket into the NCAA Super Regionals for the seventh time in program history.

Kentucky beating the Hokies marked the third-straight season that the Wildcats have swept the regional round of the NCAA Tournament as UK outscored its opposition 26-4 over the weekend. Kentucky will match up against the winner of the Seattle Regional, currently being contested by (3) Washington and Mississippi State.

The NCAA will announce dates, times and TV assignments for the Super Regional round on Sunday night.

Junior pitcher Autumn Humes went the distance in the circle for the Wildcats, only allowing one run on a pedestrian five hits in the game. She walked just one batter and struck out five. Humes was credited with the complete-game win, upping her season record to 15-10 this season.

26. The Kentucky offense scored 26 runs over its three games this weekend, destroying the competition in all three contests. UK outscored its opponents 26-4 to punch its seventh ticket into the NCAA Super Regionals.

The key play in Sunday’s 11-1 win was a two-out, two-RBI double into right center by Alex Martens in the top of the third inning. That made it a 3-0 UK lead, and pushed across the eventual game-winning runs.

Jenny Schaper was the key player in Sunday’s game, going 2-for-4 at the plate, and scoring the game’s first run on a solo HR in the top of the third with one out. Schaper launched a pitch into straight-away center into a 20+ mph breeze and had enough power to muscle it over the fence.

The Hokes struck for their lone run of the game on a solo homer by Kelsey Bennett in the bottom of the fourth inning. UK 3, VT 1

In the top of the fifth, Kayla Kowalik loaded the bases on an error by the Hokies second baseman with two outs. UK would then score five runs with two outs – as Lauren Johnson blasted in a single through the left side to plate two, Kowalik scored on a wild pitch and Kelsee Henson drilled in a single to score Mallory Peyton – who doubled in a run. UK 8, VT 1

After back-to-back singles to lead off the top of the sixth by Schaper and Katie Reed, Alex Martens hammered a three-run bomb to right field for her third, fourth and fifth RBI of the game. Martens broke the season RBI record, as she now has a whopping 66 on the year. FINAL – Kentucky 11, Virginia Tech 1 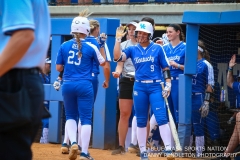 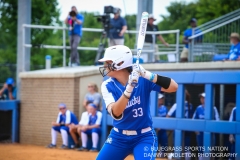 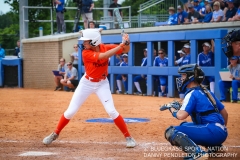 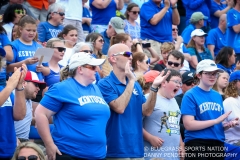 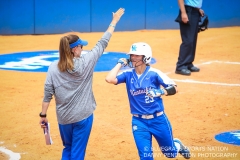 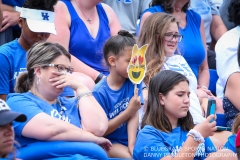 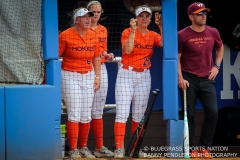